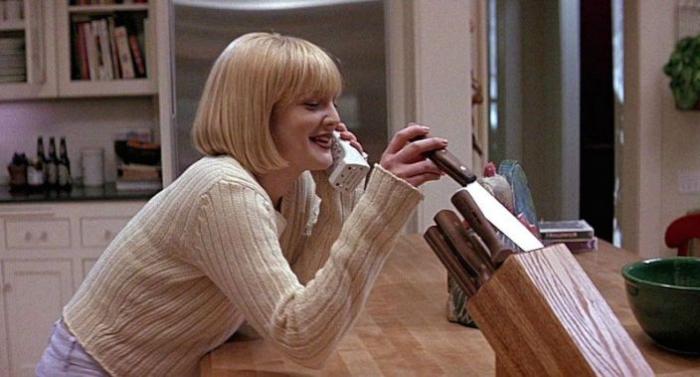 Netflix canceled Santa Clarita Diet, so the show’s hyper-upbeat, hilarious star, Drew Barrymore, is channeling all that energy into a deeply on-brand talk show. The Drew Barrymore show doesn’t strive for Ellen-like faux niceness, or Kelly Clarkson Southern charm. Instead, it’s unapologetically all over the place, inviting audiences into the delightful daffy mindset of its host.

Simply put, The Drew Barrymore Show is a gift that keeps on giving. With Halloween coming soon, the latest gift was Barrymore reprising the role of Casey Becker, the popcorn-loving teen who was slaughtered at the start of the very first Scream movie. Yes yes, we all know Casey Becker died, hanging from a tree in her backyard. But this sketch presupposes: what if she didn’t?

That’s not all. Barrymore hosted “Drew’s Movie Night,” which spawned a series of videos for Scream fans to relish.

Following in the “what if they didn’t die” vein, Aimee Teegarden shared what her Scream 4 character would be up to if she hadn’t fallen prey to Ghost Face.

Sarah Michelle Gellar shared what might have happened to Scream 2’s Cici if she had survived that rooftop dive.

Elise Neal made it deeper into the final cut of Scream 2, but bites it on the street. What lesson is there to learn from that death? RUN, no matter what your reckless friend does.

Patrick Warburton of Scream 3 imagines his character might have turned up on Keeping Up With The Kardashians.

I was today years old when I learned W. Earl Brown (Deadwood’s Dan Dorrity) got killed by Ghost Face in Scream! Am I alone here?

Culkin is married to cinematographer Sarah Scrivener, who worked on Scream 4 as a camera production assistant. The rest of the details on their story aren’t online. So here’s hoping Barrymore will invite Culkin back and dig a bit deeper into this sweet and spooky story.