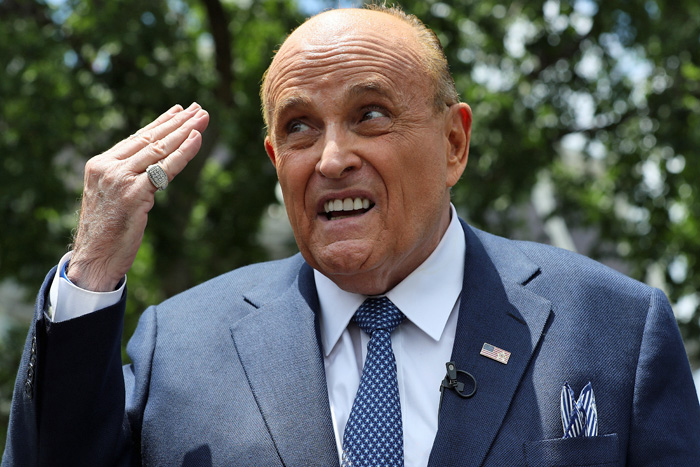 If you’re blissfully unaware, the climax (phrasing) of Borat Subsequent Moviefilm involves Rudy Giuliani being caught in a very compromising situation that looks all kinds of bad. Christ, if Sacha Baron Cohen can pull this off, imagine what Russia has. Anyway, with the scene now blasted all over the internet, Giuliani is freaking out and accusing Cohen of somehow orchestrating the scene on the fly to retaliate for the Hunter Biden emails? Sure, buddy. America’s Mayor also claims to have just been tucking in his pants while lying down on a bed, as one does. (The Daily Beast)

Shonda Rimes quit ABC after they played some cheap bullshit with her over a Disneyland pass even though she made the network billions. (Dlisted)

My father, @MelBrooks, is 94. He has never made a political video. Until now. #MelBrooks4JoeBiden#BidenHarris#GrassrootsDemHQ pic.twitter.com/yQZhopSbNV

One of the cops involved in the killing of Breonna Taylor claims that actually he’s the victim here, and oh by the way, George Floyd really died of a drug overdose. Yeah… (The Root)

Yesterday, I wrote about how Demi Lovato is into telepathically connecting with UFOs, and now, Miley Cyrus is claiming she made eye contact with an alien. (Uproxx)

lee pace unfollowed chris pratt so here are some pics of the 6’5” king to celebrate pic.twitter.com/EUXYnPznqv

Jared Leto is returning as The Joker for Zack Snyder’s Justice League, so I’m just going to be over here asking myself if this is the price for Zack Snyder backing Joe Biden and is it too high? (THR)

And speaking of… remember three weeks ago when Republicans were screaming to high heaven about how the Democrats are anti-Catholic? How’s the GOP handling the Pope news today? Hopping right aboard? Praising that sweet, sweet Catholicism? (Time)

Brit Bennett’s The Vanishing Half, a multigenerational family drama about twin sisters, one who chooses to live as a Black woman and one who chooses to pass as white, has been optioned by HBO. Mobius_Walker gave it 5 stars. "By including the lives of the sisters and then their children, we see the consequences of the sisters’ choices in the lives of their children in very surprising ways." Will you read the book or wait until the series is released? (Cannonball Read 12)

← TIL: Maury The Hormone Monster on 'Big Mouth' Is Not Voiced by Will Arnett | Within the Next 10 Years, the GOP Will Come to Democrats Begging to Abolish the Electoral College →