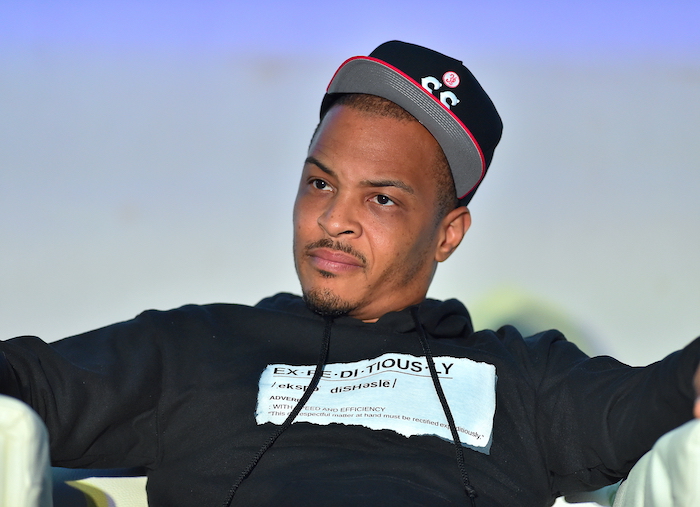 There is nothing I love to see more than when someone engages in small, yet public, acts of resistance against the f*ckery in their life. So, I let out a whoop of joy when I saw this tweet, earlier this morning:

Look, sometimes people in your family do you dirty, and a break from their BS is the best thing you can do. You’ll recall that while she hasn’t addressed his comments publicly (which, why should she? What would she say? “My dad is gross and sucks, and now you know what I’ve been dealing with but I still want to spend time with my family so Christmas will probably be awkward this year”?!) she has liked a few “Gross. WTF T.I.?” Tweets, and now she’s unfollowed her old man on Instagram. I’m pretty sure she’s gotten her point across to the public, and to us, that this is not OK.

That does mean, however, that she may need new accounts to follow to bulk out her feed. Since 18-year olds are most definitely in the habit of listening to 35-year old women who own multiple ways to watch Adventures in Babysitting (DVD, Blu-Ray, streaming-copy, and now, Disney+) I figure why not put together a list of accounts for Deyjah to follow.

OK, yes, I agree, Azalea is extremely problematic. Extremely. However, T.I. is feuding with her right now after he said that signing her was his biggest blunder. Azalea fired back that T.I. is a huge misogynist.

Her quote, per The Independent:

“He’s a huge misogynist and has never been able to have a conversation with any woman in which he doesn’t speak like a fortune cookie.”

The enemy of your enemy doesn’t need to be your friend, but a well-timed like on a post would undoubtedly send the message to someone who isn’t even tenth-billed in the Ant-Man movie: I know you’re watching, pops.

‪This evening The Duke and Duchess of Sussex accompanied Her Majesty The Queen and members of @TheRoyalFamily to the annual @RoyalBritishLegion Festival of Remembrance. This special event, which has taken place every year since 1923 at the @RoyalAlbertHall, commemorates all those who have lost their lives in conflicts.‬ • ‪This year’s Festival marked the 75th anniversary of a number of crucial battles of 1944, with a particular emphasis on the collaboration and friendship of the British, Commonwealth and Allied armies who fought them. A unique tribute was given to acknowledge those involved both past and present, culminating in a special parade of some of the last surviving veterans who fought and served in 1944.‬ • ‪Their Royal Highnesses, who last year attended their first Festival of Remembrance together, were honoured to once again pay tribute to all casualties of war and remember those that have made the ultimate sacrifice for their country.‬ ‪#FestivalOfRemembrance ‪#WeWillRememberThem‬ Photo © PA / Royal British Legion

Oh, man, this doesn’t need to be explained, does it? Meghan Markle’s father f*cking sucks so hard. A few well-timed likes on her posts would be very cathartic. The Duchess of Sussex knows that Deyjah is going though. Probably more than any of us do.

Yes, I know, I covered the fact that T.I. and Ludacris already ended their feud years ago. However, just because it’s done and dusted doesn’t mean that there isn’t a tinge of “he knows what he did” still between the two. Additionally, the 9th Fast and Furious movie is coming out sooner than later, and you’ll recall that Ludacris is a integral part of the “family” as it were. He is also billed higher than T.I. is in his franchise, so that probably stings, too.

And then your babies graduate. Very proud of my first daughter daughter graduating high school, kickin’ ass and is now NYU bound. I love you and one day you’ll stop pulling away from my beastly arms & kisses 😘🦍 #DTRWG x

Look, it’s well known I love The Rock. There would be no hidden meaning in this follow (unless T.I. hates The Rock and we don’t know about it, which would be yet another reason to believe him to be a garbage person, as if we didn’t have enough already.) I just think that The Rock’s social accounts are delightful, and thus, worth everyone’s time. He also, for what it’s worth, would never talk about his own grown-ass daughter’s hymen for the world, and if that’s the bare minimum we expect of men now, well… I don’t know how to end that sentence. I was too busy feeling really bad about everything.

Anway, whatever Deyjah chooses to do, I hope her f*cking father stays out of her bodily autnomy going forward because again the bar is very low here. It shouldn’t be hard to meet it, men.