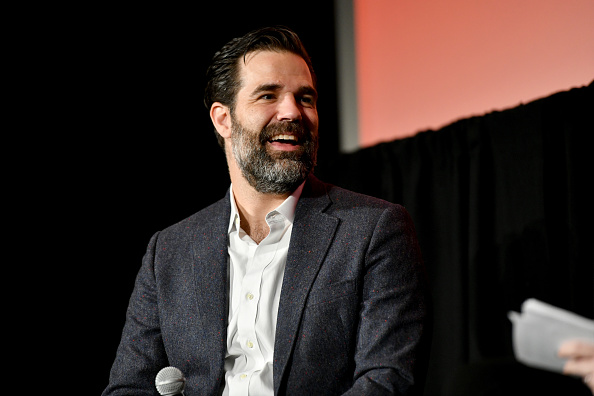 Yes, You Can Handle Rob Delaney's Book About the Death of His Child

For those who may have missed it, two years ago, my son got not only cancer but a huge mass that sat on his heart and lungs that he had to have surgically removed while undergoing cancer treatment. He lived in a hospital for six months, experienced four excruciating rounds of chemo, had two stints in the ICU, and I spent the better part of a year contemplating the possibility of life without him. He’s been cancer free for a year-and-a-half, but I still find myself imagining my son’s funeral every time he sleeps an extra 20 minutes, or doesn’t eat as much as he should for dinner, or scratches his goddamn leg. Likewise, if one of my other kids has a nosebleed, a weird rash, or a limp, my heart falls into my stomach. I manage it much better than I did a year ago, but I continue to live in constant fear of losing a child.

I’m also a longtime fan of Rob Delaney because of his stand-up work, because of Catastrophe, his Twitter presence, and — thanks to Petr — his politics. Five years ago, he lost his two-and-a-half-year-old son Henry to brain cancer. I won’t lie: After my son was diagnosed, I spent a lot of time on Delaney’s Instagram page trying to figure out how he managed to go on, to get up every morning, and to maintain his sense of humor. He was #DadGoals. He announced that he was writing a book about his son’s death while my son was in the hospital. At the time I thought, “That book is going to destroy me.”

My son did not die (knock on wood), and so when Delaney’s A Heart That Works came out a few months ago, I couldn’t bring myself to read it. I bought it because I love Delaney and because Delaney himself said that his fans should buy it, even if they don’t read it, because all the proceeds are going to charity. I think Delaney understood that a book about the death of his child was not an easy sell or something that the average reader of Gillian Flynn or Colleen Hoover was going to be keen to buy. He’s not wrong.

I avoided it myself for a couple of months because I didn’t think I could handle it. Even my wife was like, “You should not read that. Delaney said that he wants his readers to feel the way he did, and you’ve already felt that way, so you don’t need to put yourself through it again.” At the time, I agreed.

However, a few days ago, I saw a clip of Delaney talking to CBS This Morning on my Insta feed, and how Delaney appreciated that Gayle King had a genuine response to his book — and the death of his son — and I felt compelled to finally read it. Watch this:

I’m glad I did. My plan was to read a chapter a day so that I didn’t get overwhelmed. On the first day, I read a chapter. On the second day, I cheated and read two. On the third day, I read the rest of the goddamn memoir in one sitting. It did not, as I feared, reignite all of my anxieties. Truthfully, when we were going through it, I didn’t have anyone besides my wife to talk to who had also gone through it. It was during COVID, so we couldn’t even talk to the parents of the patients in the next hospital room. No one I had ever known had gone through something like that. When my son and I wrote about it for the site, some people reached out who had gone through similar experiences, and that meant the world to me. A Heart that Works is like being able to finally have an entire (one-sided) conversation with someone else who had gone through a similar experience.

The outcome for Delaney was different — and as he details in the memoir, his sister’s husband died by suicide during his son’s hospital stay, and his own father was diagnosed with exactly what my son was diagnosed with — but even if you don’t lose a child, there’s a lot of grieving, grieving about what might happen, and grieving about the simple loss of normalcy. It’s like a war, and reading A Heart that Works was like discovering another soldier in that war with whom I could relate. It meant a lot.

It’s a great book. It is sometimes sad. But it is also often funny. There’s a whole chapter — my favorite in the memoir — about what horror movies (and Ari Aster) have meant to him, and how horror movies are immensely helpful in processing grief. Since my son’s experience, he and I have bonded a lot over horror films. My kid is 15 and he loves Saw. I don’t know why, exactly, but that fear and gratuitous violence, death, and bloodshed are helpful. Final Destination films are like a balm for the heart.

Delaney also speaks about how he sometimes has a hard time talking to other parents who haven’t gone through an experience like his, and I feel that — and felt it a lot while we were in the thick of it. Parents complaining that their kids were missing school or had to wear a mask while mine was fighting for his life in a hospital room while they pumped him full of chemicals? Get the fuck outta here.

I also appreciate how blunt Delaney is. His son died. He’s not going to soft-pedal it. He’s not going to try and make other people feel better about it. As he suggested in that video with Gayle King, he appreciates a genuine response. Me too. I remember the day after my son was diagnosed, I had come home for something, and a neighbor across the street casually asked, “How are you guys doing?” I told her, “Declan is in the hospital. He has cancer,” and she didn’t mean to, and she may have even felt bad about it, but tears spontaneously shot out of her eyes. I know it wasn’t entirely about Declan, and that it was mostly about the thought of her own kid having cancer, but I appreciated it because, for a few seconds, she felt a little of what I was feeling.

That’s what Delaney is going for with A Heart that Works: To make his reader feel, if only for a few fleeting moments, what he felt like. What he feels like. Because his kid is dead, and yours isn’t, and the least you can do to honor Henry is to feel a little sad about his loss. So, yes: Read A Heart that Works, or don’t read A Heart that Works, but don’t say, “I don’t think that I can handle that,” because that is a real kick in the pants to those who weren’t given the choice.

And again, even if you don’t read it, buy it.