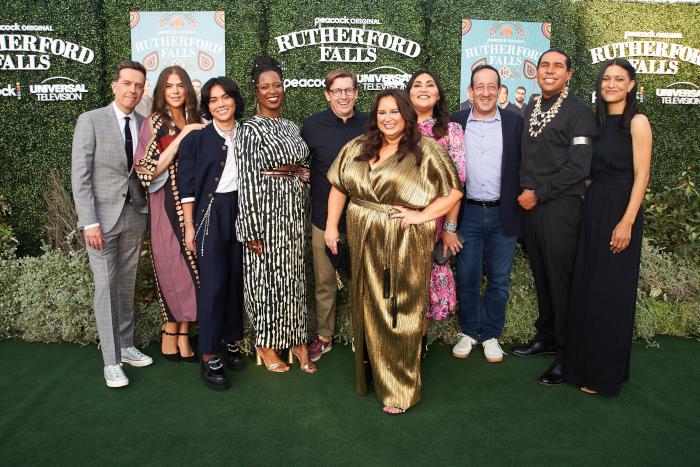 The TV cancellation gods have been particularly cruel lately. I’m still upset about the unjust early demise of Teenage Bounty Hunters, The Babysitter’s Club, Julie and the Phantoms, and a host of other shows. They all deserve to be on the air a thousand times more than shows like Jack Ryan — where the U.S. is always the good guy and our flaws are always hidden under firepower and freedom.

Weird how the shows being axed so often have audiences who are also dismissed or underserved in real life, isn’t it? The latest, most heartbreaking example of this is Peacock’s gone-to-soon gem, Rutherford Falls. This resonant sitcom only had a two-season run, yet it is still at the very top of the “stories we need to tell” list.

At its core, Rutherford Falls is a tale of two best friends and history nerds, Nathan Rutherford (Ed Helms), and Reagan Wells (Jana Schmieding). They’re platonic and incredibly endearing — except for when Nathan lets his privilege take the wheel. While attempting to revitalize local interest in their town’s history, the two buddies work to champion the legacies of their people without turning on each other, even when one is the product of an oppressed society, and the other is the product of her oppressor. Even when the town’s history is maybe not as copacetic as it first appears to be.

Like many sitcoms, it takes some time to find its footing, and some episodes are more uneven than others. Still, it’s a surprisingly thoughtful premise with unflinchingly funny writing and spot-on racial dynamics. The story is further elevated by an impressive number of hilarious and instantly memorable characters. Actor, writer, and co-creator Jana Schmieding is the titan who anchors a top-tier ensemble. This cast does not disappoint, and any scene featuring Sally (Julia Jones) and Wayne (Bobby Wilson) automatically has me rolling on the floor. Terry Thomas (Michael Greyeyes) and his wife Renee (Kimberly Guerrero) are straight-up couple goals. Their petty-yet-diverting rivalry with Feather Day (Kaniehtiio Horn) is painfully familiar to anyone who has ever lived in a small town. Don’t even get me started on the luminous Jesse Leigh as Bobby Yang, Future President, or the similarly fabulous mayor Deirdre (Dana L. Wilson). Every single character feels complex, lived-in, and zany as hell. Think Superstore, but set in a small town with a rez.

Instead of framing yet another BIPOC story through a white savior gaze (see also: The Last Samurai, Dangerous Minds, Pocahontas, and half of our Best Picture lineup), Rutherford Falls winks at us. And changes the game.

They’re not stupid — it’s an incredibly strong writer’s room — so they pretend to fall in with the party line. In season one, Rutherford Falls heavily features rich, cis white male Nathan as arguably the main character. But if you’re paying attention, you’ll soon realize that they’re actually showing us why Nathan should not be in the foreground of a story that was never really his. Why Reagan, and the other members of the fictional Minishonka nation, are the ones who should be driving this narrative. Ultimately, Nathan needs to recognize the unequal playing field and his resulting favorable position, which is all folks want to hear sometimes.

By the end of the second season, Nathan understands that he is not culpable for the poor choices of his ancestors, but he is a product of the society they built. A society created to benefit him above all. His evolution from a well-meaning part of the problem to a self-aware ally is a masterclass, oe of the best redemption arcs I’ve seen since Zuko in Avatar: The Last Airbender. All the more so because by the end, Nathan’s not even the focus of his own arc. He goes from fighting to keep his ancestor on a pedestal to recognizing his seemingly illustrious forefather’s role in colonizing and oppressing an entire people. Beware, beware the Mal-mer!

This character arc is typical of Rutherford Falls. Even when they’re warming your heart or cracking you up, they don’t let you sleep on the tainted roots of our American Dream. This show forces you to pay attention to the unfiltered truth without wallowing in it or reducing Indigenous Americans to avatars of suffering. The very best moments of Rutherford Falls are the ones that show the everyday beats and casual cultural touchstones of the Minishonka. They’re so unique and specific to indigenous life, and yet they’re also utterly relatable at the same time. The scene where Reagan is mourning her Auntie and remembering her down-home lessons on the art of frybread is perfectly evocative of my Abuela teaching me to make tostones “the right way.”

Rutherford Falls also features one of my all-time favorite characters, Terry Thomas. His deadpan, razor-sharp-yet-noble Terry commands your attention every time he’s on screen. His blistering monologue reading a misguided, entitled liberal journalist for filth deserves to be in the top ten TV moments of all time. (Don’t worry Dustin Milligan, I still love you). This masterclass on tribal capitalism begins with an absolute hammer of a line. “For someone who claims to give a voice to the voiceless, you have a real problem listening.” Hey studio gods who like to pat themselves on the back for featuring All The Content during heritage months, are you paying attention?

Even if you don’t watch this show because you’re understandably mad at Peacock, go watch that barnburner of a scene. And then ask yourself why a force of nature like Terry has to fight so hard and leverage every single tool in his considerable arsenal just to get his people a seat at the table. Take a minute to realize how close to home that message hits. Just look at this incredibly depressing statistic from a 2021 Variety article. “Data from Reclaiming Native Truth found that the inclusion of Native characters in primetime television and popular films ranged from 0-0.4%.”

Culture is at its best when it’s a blend of different voices. With all of the major networks and streaming services we now have, there is no excuse for continuing to champion the dominant narrative while shoving other perspectives to the side. That’s the exact lesson Rutherford Falls has been trying to teach us. Clearly, we failed to listen.


← Yes, You Can Handle Rob Delaney's Book About the Death of His Child | 'Women at War' Review: The French Can Do Schlocky Prestige Melodrama as Well as Americans →