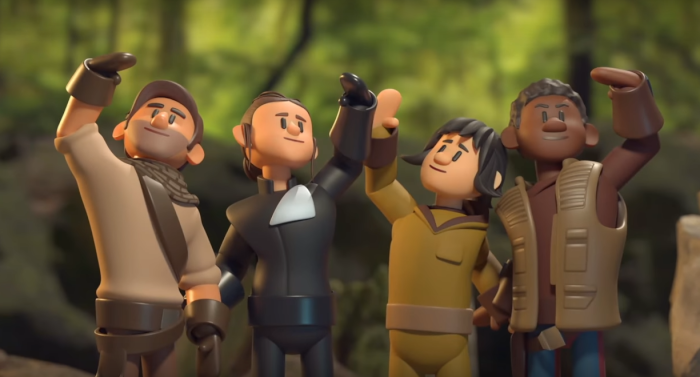 The Animated Version of that 'Star Wars: The Rise of Skywalker' Alternative Trevorrow Script is Already Better Than the Movie We Got

Hey did you know that Star Wars: The Rise of Skywalker came out in December 16th last year? That’s two and a half months ago. For some reason it feels like way, way longer than that to me. Well, ‘some’ reason. We know why. We know why time’s gone soft. The past few weeks have been an epoch. We’ve all been knocked out by world events and left gazing punch drunk at the wheeling cosmos above like Gandalf post-Balrog. No wonder even the tail end of the river of curb vomit that was 2019 feels like a distant golden age compared to now.

But hey, curb vomit’s a neat way to circle back round to The Rise of Skywalker, aka: Yes, Misogynerds, We’ll Do What You Say, Just Please Stop Saying Mean Things, aka: Boaty McF**kface (what? They don’t have to make sense.) The chief problem with that movie was, of course, that script. That godawful, inconsistent, empty, unimaginative, vindictive fan service that in its sheer Benioffweissian level of cackhanded incompetence managed to service precisely no one. Part of the story of the development of that gibberish was the firing of original Rise of Skywalker director and screenwriter, Colin Trevorrow. These days Disney famously exercises a dictator-like approach to its creatives: Toe the line, or you’re out. It happened with Lord and Miller on Solo, Rian Johnson on any follow-ups he might have made, and it happened with Colin Trevorrow.

In the latter’s case, most of us thought that was probably a good thing. The man’s a bit of a knob and a hack, and he’s certainly emblematic of wider systemic issues in the industry. Nevertheless, when Trevorrow’s original script for Rise of Skywalker leaked in January, many were taken aback. This thing actually seemed…good? Any perceived quality might well have just been a symptom of the disaffection felt with the movie as it was actually released, and there are a billion things that could happen to the script on its journey to the screen, but the difference in the quality of certain storytelling decisions could not be denied.

Now that Trevorrow script has been animated, courtesy of animator Ethantaylart and the Mr Sunday Movies YouTube channel. You can check it out below. I already like it more than the actual movie.

← Chris Cuomo Tests Positive, Is Probably Going to Get a lot of Ribbing From Brother, Andrew | A NYTimes Political Reporter Tells a Critical Infectious Disease Expert to 'Move On.' It Did Not End Well →