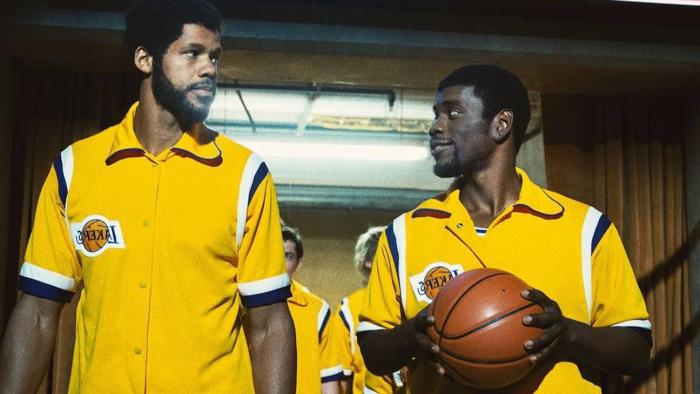 The satisfying season finale of HBO’s Winning Time aired this week, and most of the episode took place during Game 6 of the 1980 NBA Championship. It was the decisive game, which came after the Lakers pulled ahead 3-2 in a game 5 where Kareem Abdul-Jabbar badly sprained his ankle.

You can see here where Kareem is hurt in the clip below. It’s cued up here to Game 5, at the 49:36 mark, after Kareem scores a basket to put the Lakers up 67-65. He hobbles thereafter, but they don’t immediately call a time-out to remove him. It’s clear, though, that he’s hurt, and he eventually goes into the locker room. He comes back out at the start of the 4th quarter and he continues to carry the Lakers while hobbling on his sprained ankle. The Lakers pulled out a 108-103 victory. Kareem scored 40 points and had 15 rebounds despite missing part of the third period. He scored 14 of those points in the fourth quarter alone.

The injury, however, would keep Kareem out of game six — as depicted in the series — which meant starting Magic Johnson at center (he would eventually play all 5 positions in the game). It may have been the best game of Magic’s entire career, as he scored 42 points and grabbed 15 rebounds. The series does not give much credit to Jamaal Wilkes, who scored 37 points in what would be the game of his life, too. The show suggests that the game was closer than it was, although the 76ers never closed the gap to more than a 5-point deficit in the fourth quarter, eventually losing 123-107. I don’t think that Jerry West did a lot of sweating in that fourth quarter.

Here’s the cued-up Jerry Buss speech after the game, and he is a bit emotional, as John C. Reilly was in the series (although, the real Buss probably wasn’t thinking about his late mother, whose year of death is unknown). Paul Westhead does also thank Jack McKinney in his remarks, and the players (including Norm Nixon) make sure to single out Kareem’s contributions. The MVP presentation to Magic comes after the speech, and it tracks closely with what we saw on the screen, although I think he gives a little more credit to Kareem in the real clip than suggested in the series.

It is true — as depicted in the series — that Kareem was originally named the MVP of the series, and the CBS network (and not David Stern) talked to writers — by a 4-3 vote — into giving it to Magic Johnson, but only because the network didn’t want to give the MVP to someone who wasn’t there to receive it. It’s unclear, however, if Magic actually knew that, or if Kareem was actually waiting for the phone call. Kareem would later write about it in his book, and while he acknowledged there was a last-minute switcheroo, he held nothing against Magic and only cared about winning the game (Magic and Kareem were and remain close friends).

Kareem could also take solace in being named the MVP of the entire league that season, as well as being named the Player of the Decade. It is worth noting, too, that Magic did lose Rookie of the Year honors to Larry Bird by a 63-3 vote, as depicted in the series. It’s unclear (and unlikely) that Magic learned that in the fourth quarter of Game 6. Statistically, Bird did have the edge — he scored 3 more points per game and grabbed 3 more rebounds per game, although Magic had 3 more assists per game — but it certainly wasn’t a 63-3 edge.

For those interested in the Jeanie Buss drama, that is almost entirely a series-created fiction. In 1979, Jeanie was only 17 years old, although two years later — in 1981 — her dad did appoint her the general manager of a tennis franchise, the Los Angeles Strings. She performed that job while attending U.S.C.

Also, and this is weird: Jeanie Buss — who does run the LA Lakers now, having inherited her father’s team and legacy in 2013 — is 60 and dating Jay Mohr of SNL fame. What?!

Happiness. Love. Joy.
That’s what you have given me on my birthday and every day in between. This picture, taken at our friend’s wedding in June, tells the story, our story.
I guess really can have it all.
I love you @jaymohr37 ❤️ pic.twitter.com/UzkGZDZ2R8

Winning Time has been picked up for another season. It’ll be interesting to see where it picks up. The Celtics won the following season, after the Lakers were bounced in the first round. The Lakers, however, beat the 76ers again the following season, before losing to the 76ers in the season after that. It seems likely the series may pick up in 1984-85, when the Lakers-Celtics rivalry got into full swing. The Lakers and the Celtics didn’t face each other in the NBA Finals until 1984-85 (a Lakers win), again in 1985-86 (the Celtics won) and again the following year, which saw the Lakers win (The Lakers were the more dominant team in the 80s, winning 5 Championships to three by the Celtics).