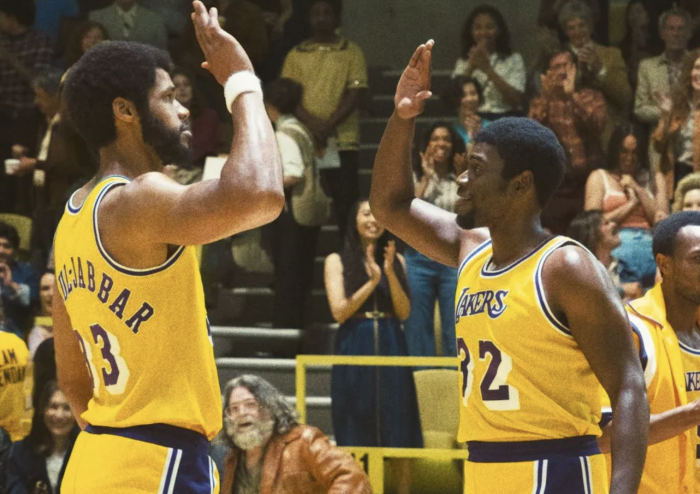 I am not familiar enough with the 1979-80 Los Angeles Lakers to always know what is true and what isn’t on HBO’s Adam McKay HBO series, Winning Time, so I’ll admit that I spend at least half an hour every episode reading Wikipedia entries, watching YouTube clips, and reading magazine articles from the Internet’s archives. We know that the series takes a lot of dramatic liberties and futzes with time, but what is genuinely remarkable about the series is that most of the big moments in the series are based on reality.

Take, for instance, the still-unsolved mob hit that derailed Jerry Tarkanian’s chances to coach the Lakers. Or even the fact that Jerry Buss wanted to replace Jerry West with Jerry Tarkanian. Were all men named Jack or Jerry in 1980? Or even the kismet of Jerry Buss taking over a franchise during Magic Johnson’s rookie year.

The end of this week’s episode (spoilers) featured a moment that I knew was coming, although it was a lot more horrific than I was expecting: The bicycle wreck that ended Jack McKinney’s stint as Lakers’ coach only three weeks into the season. It was gruesome enough that I may never ride a ten-speed again. That was real. That happened, and his assistant Paul Westhead took over as head coach with a new assistant in Pat Riley, who would later become the coach most associated with the Lakers’ dominant run in the ’80s (I have to wonder how much of that was Westhead/Riley, and how much of it was the system McKinney put in place for three weeks before his injury cost him his job).

This week’s episode took up the season opener for the 1979-80 Lakers and Kareem Abdul-Jabbar’s stoic approach as the captain of the team. The episode took a peek into his conversion to Islam as well as his stand-offishness as a veteran (at this point, Abdul-Jabbar had been in the league for a decade, been with the Lakers for five years, and he’d already won five MVP awards, so he was old-hat, even though he’d stick around in the NBA for still another decade).

What’s most remarkable about the episode, however, may be the dramatic fashion in which the Lakers won their first-ever game with Magic and Kareem, which was also their first game with Jerry Buss as owner. It’s the kind of ending you can only imagine in a Hollywood script: After the ball bounces out of bounds, the Lakers get it back with four seconds left in the game, down by one point. They throw in inbounds to Kareem and he wins the game at the buzzer with a skyhook. Magic Johnson hugs him as though they’ve won the Championship game, Abdul-Jabbar kind of throws him off of him because he’s a grumpy sourpuss, and he walks off the court and says to the reporter questioning him only, “Allahu Akbar.”

It couldn’t possibly be that dramatic, could it? Actually, yes: It happened very much like it did in the episode, except that there were only two seconds left. The hug happened mostly as seen in Winning Time, and while Abdul-Jabbar did say “Allahu Akbar,” he spoke a little longer with the reporter (telling him, even, that the game plan had called for a lob from Magic).

YouTube has the entire game, but you can jump to the 1:31 mark to watch the dramatic finish:

That skyhook is absolutely unreal.

p.s. In the game, there is a mention of Kobe Bryant’s Dad, Jellybean Bryant, although I did not see a shot of baby Kobe in the audience, as depicted in Winning Time. The timing is right, however. He would have been one year old at the time of the game.


← The Belchers' Big Screen Debut Is Coming this Summer with 'The Bob's Burgers Movie' | Review: 'Aline', the Celine Dion Sort-Of Biopic, is Both Deeply Conventional and Wildly Bananas →