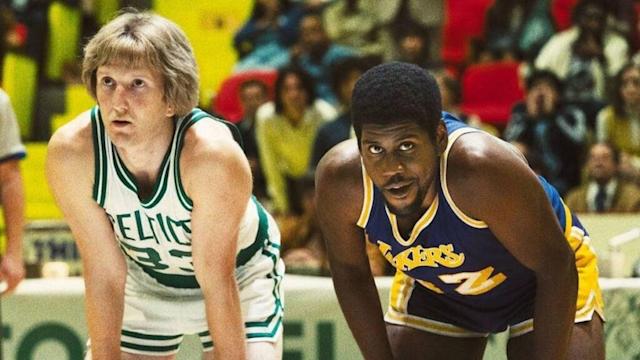 HBO’s Los Angeles Lakers series Winning Time takes a number of dramatic liberties, but as we’ve discussed before, a lot of the most unusual events are firmly based in reality (the mob hit, for instance, that derailed Jerry Tarkanian’s chance to become coach of the Lakers). I was also surprised to learn that the Lakers’ first game of the Showtime era ended nearly exactly as described in the series with a dramatic last-second shot for the win.

This week’s episode — centered largely on the burgeoning rivalry between Magic and the Lakers and Larry Bird and the Celtics — fit more squarely into the dramatic liberties category. The episode picks up after the bike accident that led to Coach Jack McKinney’s hospitalization. His assistant, Paul Westhead, is put in charge of the team and brings in Pat Riley as his assistant coach. The Lakers are depicted as struggling without McKinney heading toward the first matchup between the Lakers and Celtics in the Magic/Bird era, set to take place in Boston between Christmas and New Year’s Eve during a lengthy Lakers road trip. In the episode, owner Jerry Buss tells McKinney that if Westhead cannot turn the team around and win in Boston that he’ll have no choice but to bring in another coach (Elgin Baylor) to make a title run. The Lakers lose to the Pacers and the lowly Pistons but squeeze out a dramatic 99-98 victory over the Celtics in Boston to save Westhead’s career as Lakers’ coach.

The reality is this: The Lakers were not struggling under Paul Westhead heading toward their first matchup with the Celtics (he’d won 5 of 7), although he did bring in Pat Riley as his assistant (Riley would replace Westhead as head coach two seasons later after Magic Johnson allegedly orchestrated Westhead’s removal). Elgin Baylor, for the record, had been fired from the Jazz after a miserable season, but he was only being considered for the assistant position that Riley took (Baylor would not coach again, although he would become an executive for the Clippers).

Moreover, the first time the Lakers faced the Celtics — on December 28th, 1979 — it was in Los Angeles, and the Lakers blew them out, winning 123-105. Magic Johnson had 23 points and six assists to Larry Bird’s 16 points and three assists.

The road trip, and the close game in Boston, came after the new year on January 14th. During that road trip, contrary to the depiction in the series, the Lakers beat both the Pacers and the Pistons (but did lose to the Milwaukee Bucs and Washington Bullets). The game in Boston, however, was close, although not particularly dramatic. The Lakers won 100-98. Michael Cooper, depicted in the series scoring the winning goal, was the hero of the game (Magic sat for much of the game nursing a groin injury), although not for scoring the winning goal. Cooper’s heroics were on defense. He managed to shut Larry Bird down for the entire third quarter.

In reality, the game was 98-98 going into the final seconds. The Lakers had the ball, and with a few ticks left, Norm Nixon was fouled. He shot two free throws to put the Lakers up 100-98. The Celtics made a last-second shot (that would have counted) but it bounced off the rim. You can watch the final minutes here:

It was only the second loss at home on the season for the Celtics, but also the Celtics’ second loss to the Lakers that year. Larry Bird did have one comment after the game, which was not particularly reflective of the bitter personal rivalry between Bird and Magic depicted in the series. “The matchup is pretty sad,” Bird said, “when you have to build up two guys who don’t even play the same position over Kareem and Dave Cowens, two of the best centers in the league. I think Magic is probably as sick and tired of all this as I am.”

I can’t speak to a racist history for Larry Bird implied in the series, but I can say that he contributed to the Trump campaign in 2016. Make of that what you will. I suspect that Adam McKay certainly did.