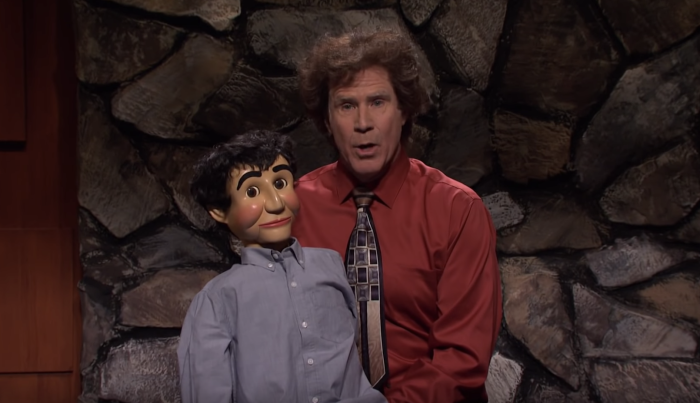 Will Ferrell Hosts a Terrific 'SNL,' But That Last Sketch, Oh My

Cold Open — Alec Baldwin (ugh) returns for a fairly unremarkable cold open as Trump denying a quid pro quo. Ferrell makes a rare appearance as a host in a Cold Open sketch as Gordon Sondland to give it a small lift, but it’s not enough. I mean, did you hear Trump on Fox & Friends on Friday? Everyone should just give up trying to satirize Trump. It is a lost cause. There is nothing that Alec Baldwin or any other Trump impersonator can do that is as insane as Trump himself. (Watch Here) (Score: 3 out of 10)

Will Ferrell Monologue — Ferrell is too nervous to deliver his monologue because Ryan Reynolds is in the audience, and Ferrell can’t stop freaking out, which makes Reynolds horribly uncomfortable (Reynolds does a solid assist here as a straight man). This is basically the kind of monologue only Ferrell can pull off. Tracy Morgan shows up and it goes off the rails, in the best kind of way. (Score: 7.5 out of 10)

Heinz Ketchup — A new Heinz ketchup bottle that doesn’t “fart” when you squeeze it; instead, the Heinz “Relax” condiments deliver, uh, orgasm sounds. (Score: 6 out of 10)

Democratic Debate — To mock the November debates, they brought everyone back from the October debates — Woody Harrelson as Biden, Larry Sanders as Bernie, and Maya Rudolph and Kamala, plus Rachel Dratch as Klobuchar. Biden’s tone-deaf stories again are the highlight, although Colin Jost’s brief appearance as Buttigieg is pretty good, too. Will Ferrell, meanwhile, plays Tom Steyer, who does not blink; Fred Armisen shows up as Bloomberg, and Cecily Strong’s Tulsi Gabbard may be the hottest thing I’ve seen on SNL since Cecily Strong as Jeanine Pirro. The whole thing is just great. (Score: 8.5 out of 10)

First Thanksgiving — Politics come up during the first Thanksgiving in the 1600s. Ferrell plays Pocahontas’ grandfather, who is bigoted against white people, thinks they should build a wall, and believes all the conspiracy theories he hears from a Fox. They find common ground, however, over undigested corn in their stool. (Watch Here) (Score: 5.5 out of 10)

High School Party Song — Mikey and Cecily perform a song about a high-school rager they throw where their AP teacher (Ferrell) shows up and just … hangs out, polite but awkward-like, as he’s going through something akin to a mid-life crisis. (Score: 7 out of 10)

Bertucci’s Commercial — A family of four shoots a pizza commercial but after the kids say that their mom is embarrassing them, she bails, and then Dad doesn’t know how to operate without her. Then it gets weird. Man, I miss Bertucci’s. Do those exist outside of Massachusetts? It’s a very fine skit, but mostly, it’s fun to see two of the best SNL cast members of all time — Ferrell and McKinnon — play off of each other. (Score: 6.5 out of 10)

Weekend Update — Che and Jost capably deliver the impeachment news this week, and then they bring out A Guy who Bought a Boat, who manages to make a gross sexual pun about every single Thanksgiving dish (R-Squared provides an awesome/disgusting assist). It’s gross sex puns and Dad jokes all rolled into one. You’re gonna love it, Mat. Also, what? How did I miss that Buttigieg dance video? It’s worse than watching Buttigieg eat a cinnamon roll. It’s a great “Update” that Che goes and spoils with that last joke. COME ON, CHE. PERIOD JOKES? WHAT ARE YOU, 12? (Score: 7 out of 10)

The Wizard of Oz Alternate Ending — You know how at the end of the Wizard of Oz, Dorothy wakes up and tells her friends that she remembers them from the dream? In the alternate ending, she explains to all the other people in her life why she remembered them as munchkins in her dream, much to their angry dismay. (Watch Here) (Score: 4.5 out of 10)

Wally Culpepper & Chippy — No comment. (Score: Oh, I am staying the hell out of this one).

← Manny Jacinto, AKA Jason From 'The Good Place' Is a Hot Environmentalist | Excuses Justin Timberlake Can Give to Jessica Biel After Being Caught With Alisha Wainwright →