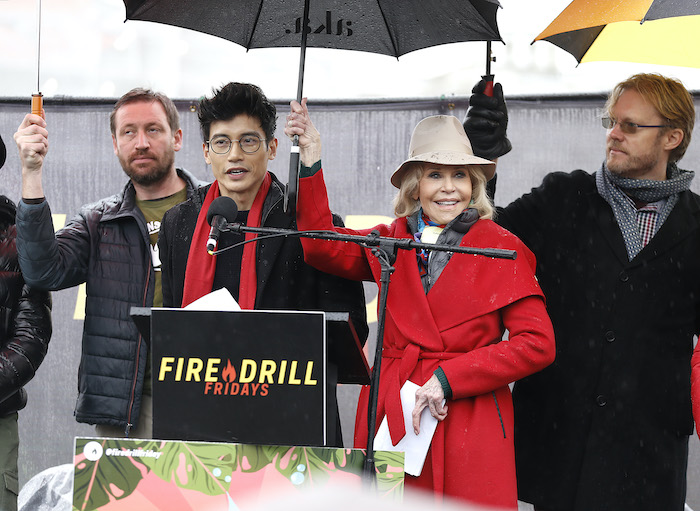 Friends, my love for Jason on The Good Place is well documented, by me, on this very site. Jason is my everything on television at this moment, and I’m not really ready to give him up when the series ends next year. However, I could be dissuaded because it turns out Manny Jancinto, who plays him, is super-hot and an environmentalist, who protested climate change inaction this week, and honestly? Yes. To all of this:

Wait, here’s another picture for all of us to cheer:

Manny Jacinto became the latest celebrity to protest inaction on climate change alongside Jane Fonda, though neither of them got arrested https://t.co/kZTtMqB8hz

Did you see this one, too?

listen i know what madame fonda is saying is vastly important but i cannot stop gawking at manny jacinto with his messy hair and glasses https://t.co/uNkjA2IBlo

One, more because this is truly the good fight:

Actor and activist @MannyJacinto drawing attention to Filipinos at the front lines of climate emergency. He also reminds the crowd of the critical need for policy reform!

I most definitely just sighed writing that just now because while Jason is my everything on television (have I said that enough? I really love Jason Mendoza, people) Manny Jacinto is the whole package, isn’t he? A dude who is willing to get arrested to protest something that he believes in, while also looking very, very, very ridiculously handsome doing it.

Now, I could contextualize this with a joke, as is my wont but honestly, I am just cat-heart eyes for Manny right now. You know, like this: 😻 😻 😻.

Obviously the message is more important than how good people look protesting the horrible inaction of this ridiculous sham of an administration. But, like, guys— it’s been a long week. I’m tired. I’ve been tired since election night 2016. Climate change is Threat Level Midnight for all of humanity and it freaks me out, a lot. So, because I’m tired and kind of burnt out on the evil chaos that plagues the good side, I figure we’re all smart people here and know what’s going on. So, it’s OK to sometimes leave the serious stuff for Monday and just, you know, decompress on the weekend and give a hearty thumbs up and a well-earned “nicccce” to Manny Jacinto and call it a day, for today. That cool?

If you needed any more proof that he’s a good egg, with a good head on his shoulders, I will just leave you with this proof, friends. He, like the rest of us, know that D’arcy Carden is one of the best talents working today, and celebrates her thusly:

Manny Jacinto—you may not be Jason Mendoza, but I strongly suspect that perhaps you are better than DJ Music from Tampa, Florida. 😻

← '21 Bridges' Review: What the Hell Happened to Taylor Kitsch? | Will Ferrell Hosts a Terrific 'SNL,' But That Last Sketch, Oh My →