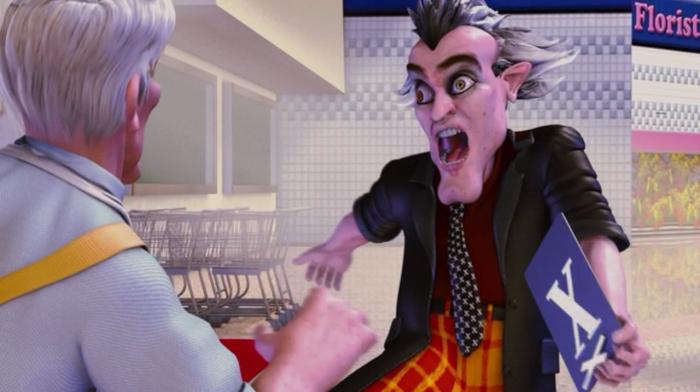 What the Hell is 'Foodfight!' the Bizarre and Disturbing Film Referenced in this Week's 'Atlanta'?

There’s a moment in the second episode of this season of Atlanta where Darius (LaKeith Stanfield) turns to Van (Zazie Beetz) during a bit of small-talk in the back of a van and says, “Have you ever seen the trailer for Foodfight!? It’s intense.”
That’s an understatement.
I assumed at the moment that the reference was some kind of Easter egg for a fictional movie for which FX had maybe created a gag website with some hidden content, so I quickly looked it up. Foodfight!, it turns out, is a real movie, and even though I have been a critic for 18 years and have written literally over 22,000 posts in that time, this movie had somehow escaped me, or it got lost in the recesses of my brain. However, the first time I watched the trailer, I still assumed it was fake, and the only reason I didn’t think it was a fake planted by FX is that the date on the YouTube video was from 10 years ago.

I looked it up on Wikipedia, and my first instinct was to believe that the Wikipedia entry was fake, as well. But the movie is firmly embedded into the Internet, so it’s either very real or a joke that Donald Glover somehow planted 20 years ago only to pay it off with a casual mention buried in a third-season episode of a show he had no idea he’d one day create.

Here, by the way, are the highlights from this movie: The voice cast includes Charlie Sheen, Eva Longoria, Hilary Duff, Wayne Brady, and Christopher Lloyd, all of whom were still very big deals when the movie was being developed. There are also several characters licensed from brands: Twinkleton (the Twinkie mascot), Charlie Tuna, Mrs. Butterworth (voiced by Edie McClurg!), and Mr. Clean. Yes, the product placement is actual characters.

Production on the film began in 1999. In 2002, hard drives containing the animated footage were stolen. Production resumed in 2004 and the animation style was changed from CGI to a form of motion capture. Based on the trailer, the finished product is a ghastly hybrid of the two. A release date was set for 2005, but it was pushed to 2007. The $25 million film was finally auctioned for $2.5 million in 2011 and released direct-to-video in 2012. It is now considered one of the worst films of all time, and no one captures that better than Nathan Rabin in his book, My World Of Flops, which I own and have read and yet still somehow do not remember this film:

It’s tempting to say that something is off from the very start here, but it would be more accurate to argue that everything is off. The grotesque ugliness of the animation alone would be a deal-breaker even if the film weren’t also glaringly inappropriate in its sexuality, nightmare-inducing in its animation, and filled with Nazi overtones and iconography even more egregiously unfit for children than the script’s wall-to-wall gauntlet of crude double entendres and weird intimations of interspecies sex.

The film, by the way, was written and directed by Lawrence Kasanoff, a film producer mostly known for the Mortal Kombat movies. Foodfight! is the one and only feature he’s ever directed. He also produced Bobbleheads: The Movie, a 2020 film featuring Cher as Bobblehead Cher:


← After All That, 'The Goldbergs' Is Poised for a 10th Season Renewal | 5 Shows After Dark: 'Snowpiercer' Third Season Finale TNT, 'Warrior Women with Lupita Nyong'o' on Smithsonian Channel →