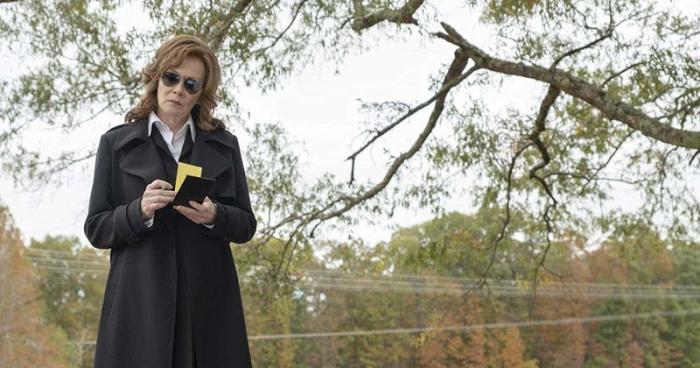 In this week’s first episode of HBO’s Watchmen podcast, creator Damon Lindelof notes that inspiration for this iteration of Watchmen came from the Charlottesville March back in 2017, along with Ta-Nehisi Coates’ Between the World and Me and a book he’d read on the 1921 Tulsa race riots. That is the lens through which we should be examining the direction of Watchmen. It’s also notable that Lindelof explicitly said that, though it is ensemble-ish in nature, Watchmen is the story of Angela Abar/Sister Night. It’s her story, and I gathered from the podcast that what happened between 1921 when Will Reeves escaped the Tulsa Riots and what led Angela’s parents to move to Vietnam (where Angela was born) may be instrumental in her story.

In this week’s episode, “She Was Killed by Space Junk” (a nod to both the Devo song played in the episode and perhaps that giant Doctor Manhattan dildo), Angela is given an antagonist in Laurie Blake (Jean Smart), formerly known as Laurie Juspeczyk, Laurie Jupiter, and Silk Spectre II. Briefly: She is the daughter of Sally Jupiter, the original Silk Spectre, who was raped by another masked vigilante, Edward Blake (The Comedian). Laurie here has taken her father’s last name and penchant for humor, as she models herself after a man she hated in lieu of the influence of the mother who ignored her. A young Laurie was also romantically involved for many years with Doctor Manhattan until she took up with the Nite Owl (Dan Dreiberg). They continued their masked vigilantism until they were apprehended. Laurie avoided jail time by agreeing to work for the FBI’s anti-vigilante unit, though the Nite Owl did not, hence his imprisonment.

That gives Laurie her entry point into the series. Senator Keene Jr. is able to convince her to come to Tulsa to investigate the hanging of Chief Crawford. “You know a president can pardon anyone he wants,” the Senator and aspiring Presidential candidate tells Laurie. “Anybody. He could even get your owl out of that cage,” he says, referring to Laurie’s former lover, Dan Dreiberg/Nite Owl. Keene, perhaps rightly, believes that masked vigilantes — and not the Seventh Kavalry — are behind Crawford’s death and he wants Laurie to get to the bottom of it.

Laurie brings along Dale Petey — the historian and FBI agent who actually compiles the Peteypedia — because she thinks Petey will be easy to push around. She’s half right: Dale puts up a front — he’s not just a “fan” — but he’s still relatively easy to control. En route to Tulsa, they pass by the Millennium Clock prompting a quote from Bryon Shelley’s “Ozymandias,” which is a nod to Adrian Veidt, whose estate was purchased by Trieu Industries after Veidt’s supposed death.

In Tulsa, Laurie works her way through the masked cops, of whom she does not approve, and Looking Glass, whom she frustrates by repeatedly referring to his interrogation facility as a “racist detector” while flapping the unflappable Wade Tilman. Eventually, Laurie finds her way to Angela Abar, but not before a Seventh Kavalry member takes Senator Keene hostage at Chief Crawford’s funeral. The Kavalry member is wearing a suicide vest strapped to his chest, but Laurie shoots him anyway using a gun she has strapped to her ankle. To prevent mass casualties, Angela has to throw the Kavalry member into Crawford’s grave and roll his casket on top of the bomb, which conveniently prevents Laurie from conducting an autopsy on Crawford’s body, obliterated in the blast. She thinks he died by means other than hanging, the evidence to the contrary notwithstanding.

Laurie also knows that Angela is Sister Night, that she took something from the secret compartment in Crawford’s closet, and that wheelchair tracks were at the scene. She’s suspicious of both Crawford and Angela. “Men who end up hanging from trees, with secret compartments in their closets tend to think of themselves as good guys, and those that protect them think they’re good guys, too … I eat good guys for breakfast.”

It’s hard to find an actress formidable enough to face off against Regina King, but in Jean Smart, Lindelof has found a suitable match, not that Angela backs down even an inch. “Ooooh,” Angela says mockingly before pouring out her coffee, walking away, and dismissing Laurie like a bad afterthought, reminding me of the infamous staredown between Regina King and Carrie Coon across a living room on The Leftovers.

After her confrontation with Angela, we hear Laurie complete a joke she’s been telling over the course of the episode to Doctor Manhattan from a blue booth used to communicate with him on Mars (Manhattan may or may not be listening). The joke recounts three superheroes clearly modeled after Doctor Manhattan, Ozymandias, and Nite Owl, who all think of themselves as heroes but one by one are sent to hell by God. The fourth person in the joke — “not a hero just a woman” modeled after Laurie — drops a brick on God’s head while no one is paying attention and delivers him to hell. This, too, is a nod to the comics, where Laurie’s Silk Spectre II was valued only as a sex object, and yet in the present, she’s essentially unleashed Chekhov’s metaphorical brick.

Outside the blue booth, Angela’s car falls from the sky, dropped by an orange-red glow, which is either a Nite Owl aircraft or Doctor Manhattan acknowledging the joke from Mars, or both.

— For the first time, Jeremy Irons’ character explicitly acknowledges that he’s Adrian Veidt. We still don’t quite know where he is or what he is up to, but it seems like he’s being held captive in this world by someone else (perhaps Doctor Manhattan?). Lindelof assures us that this story will eventually converge with the main storyline and that all of our questions will be answered. He also notes that all nine episodes will have these 5-minute intermissions, so to speak, involving Veidt (due to the weather in Wales in the brief window in which they had to film, those scenes were written first and shot in their entirety before they filmed the second episode).

— “You know how you can tell the difference between a masked cop and a vigilante? Me neither,” Laurie jokes to Angela at the funeral. She really doesn’t like the masked-cop policy, although Keene is offering it as a model to other cities in the nation.

— The song that Angela sings at Crawford’s funeral is called “The Last Round-Up.” Here it is performed by Roy Rogers.