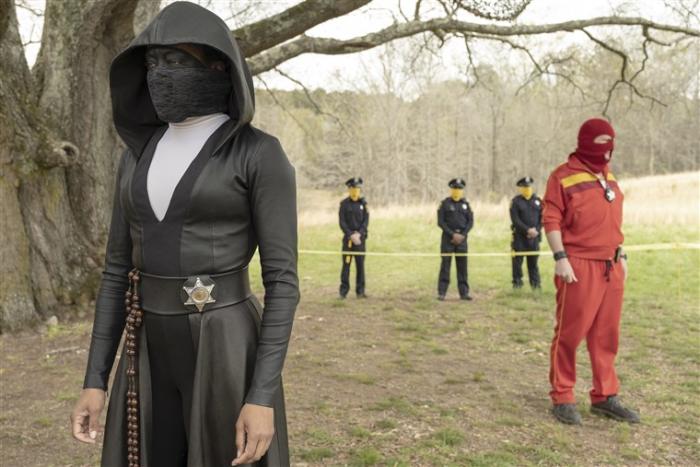 Recap: What the Hell Is Going On in the 'Watchmen' Premiere?

I have read Alan Moore’s Watchmen, and I have seen Zack Snyder’s adaptation, but I would not regard myself as a fan of either. I am, however, a committed fan of Damon Lindelof; The Leftovers is my favorite series of the decade. I’ve wanted to cover this show since it was announced, but I have been unsure of how to approach it. I don’t want to make it about how it relates to Alan Moore’s work — there are a lot of terrific writers incredibly well versed in Watchmen who are doing that — but it’s also important to respect the mythology because it’s such a huge part of Lindelof’s series.

Does that mean you need to have read Watchmen to understand the HBO series? Absolutely not. In fact, in an interview with Alan Sepinwall, Lindelof suggests that comic-book readers and non-comic-book readers alike will be equally confused by the events of the pilot. I can confirm. If you’re a fan of the comic, however, there’s a lot in the HBO series that will ping your dopamine receptors, unless you’re an edgelord hoping that Lindelof does for Watchmen what Todd Phillips did for Joker, which is to say: Turn it into a manifesto for aggrieved white men. If you are that person, you’re going to hate Watchmen. There’s evidence that a lot of those people already do hate it. Forty-five percent of the 50 percent who hate Watchmen are probably Joker fans who, ironically, are complaining about politics being explored in a comic-book show.

(Having seen the premiere of Watchmen, I am even more bummed that The Hunt — red state vs. blue state The Purge written by Lindelof — was pulled from theaters).

I do want to dig into the comics stuff in a later post, but if you’re unfamiliar with Moore’s source material, here’s what you need to know: Alan Moore’s Watchmen is set in an alternate universe with superheroes, only one of which (Dr. Manhattan) has actual superpowers. These vigilante superheroes existed starting in the late ’30s, but they were outlawed by Congress in 1977, save for a few government-sanctioned superheroes (and a guy named Rorschach, who worked outside the law). The 1980s in Watchmen look similar to the 1980s in our own universe, save for a few wrinkles brought about by the presence of superheroes. For instance, we won the Vietnam War, there was no Watergate, and Richard Nixon served 5 terms, which is why Nixon is among the Four Most Important Presidents (he was also added to Mt. Rushmore). 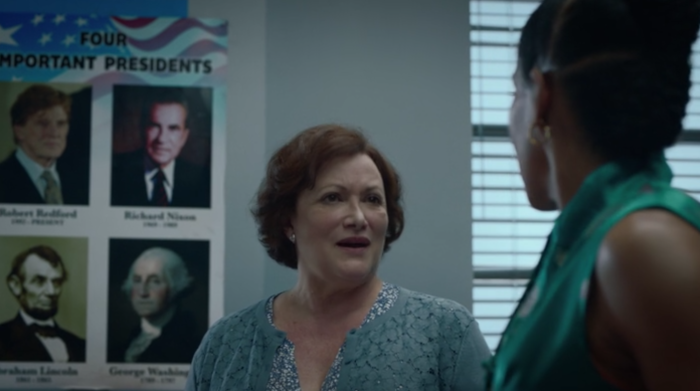 Lindelof’s Watchmen is set in the present day, where Robert Redford is the President of the United States (and a well regarded one, apparently). In this alternate reality, there are no smartphones (we still use pagers), but all the cars are electric (thanks presumably to Dr. Manhattan, who left Earth in 1985 at the end of Moore’s Watchmen and is apparently still alive wandering around Mars). There are also squid showers — thunderstorms that rain down squids, which in some cases can be deadly — a nod to the comics but also unexplained, so far, in this universe (it’s very Lindelofian).

In the present, Rorshach is dead, but his journals live on, and white supremacists working under the name Seventh Kavalry have cast Rorschach as their martyr hero. The Redford Administration is a liberal one that suitably treats white supremacists as terrorists, but there’s also some apparent overreach: Even patrol officers have to go through some bureaucratic checklists to get their guns released to them, which proves to be a problem for a patrol officer confronted with a Rorschach-inspired member of the Seventh Kavalry, who shoots the officer before he can secure the release of his gun. In this universe, police officers also wear masks, which is good because it helps them hide their identities from people who would want to do them evil, but also bad because it allows them to commit evil while maintaining their anonymity.

In this universe, there are still government-sanctioned superheroes who wear masks but, again, have no actual superpowers, like Angela Abar (Regina King), Red Scare (Andrew Howard), and Looking Glass (Tim Blake Nelson). Best I can tell, these superheroes can also get away with ignoring the Fourth, Fifth, and Eighth Amendments by working for the government off-book, so to speak. They strike me as very Colonel Nathan Jessup: You want to live in Redford’s liberal society, you need these superheroes on that wall.

What Lindelof has very clearly done with Watchmen is to adapt a comic-book universe in a way that allows him to comment on issues of race in America, which feels like an unintentional f**k you to the Scorsese and Coppola types who believe that nothing of substance can come of the comic-book genre. Lindelof and director Nicole Kassell do a masterful job with the pilot, but trust this: There will probably be a misstep or three along the way, and the Internet may come for Lindelof once or twice during the HBO run.

Lindelof sets Watchmen in Tulsa, OK, and he opens the story with a look back at the 1921 Tulsa race riots. Our own Steven Lloyd Wilson wrote about those race riots in 2014, and this was his original headline: “The Wealthiest Black Community in America Was Destroyed and No One Remembers It Happened.” The fact that no one remembers it happened has been echoed on social media multiple times today. That actually works to Lindelof’s advantage, because he’s digging up a sore spot that Oklahoma has tried to keep hidden, and it almost feels like it belongs in an alternative universe because the Tulsa riots are not covered in our history books. However, our universe and that of the Watchmen universe do not diverge until the late 1930s: The Tulsa riots are real, and white people really did use planes to bomb an entire community because a 19-year-old black shoeshiner got on a whites-only elevator.

In any respect, in Watchmen, one kid escaped from burning Tulsa after his parents stuck him in the back of a truck heading out of town. After that truck crashed, the little boy crawls from the wreckage and finds a note that reads, “Watch over this boy.” 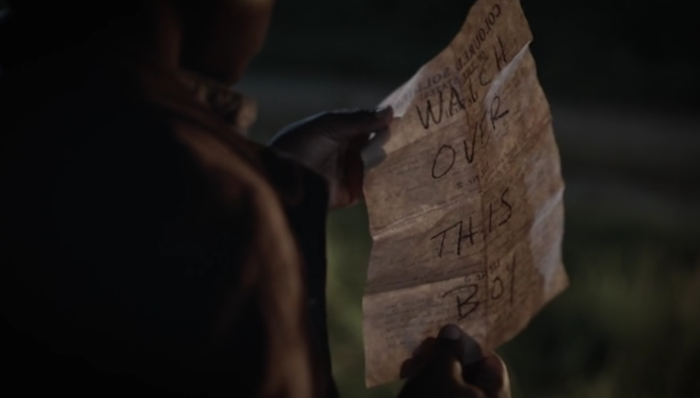 Those race riots are the backdrop to the present-day conflict between the Seventh Kavalry and the Tulsa police force, a conflict that had apparently gone dormant for three years but returns in a big way in 2019. After a member of the Seventh Kavalry shoots a black patrol officer, Angela Abar, Red Scare, and Looking Glass destroy their terrorist cell under the umbrella of the police force, led by Sheriff Judd Crawford (Don Johnson). They do find, however, that the white supremacists are stockpiling old watch batteries for unknown reasons (I feel like Sheriff Crawford, who acts very dismissive, knows more about that than he lets on).

At the end of the episode, Angela is called out into a field, where she finds that Crawford has been hanged. In a wheelchair next to his body is Will Reeves, an old man played by Louis Gossett Jr. He’s holding the same sign that the little boy who escaped the Tulsa race riots in 1921 was holding, and we can assume — based on the previews of next week’s episode, in which the old man says he is 105 — that Will Reeves actually is that same boy. 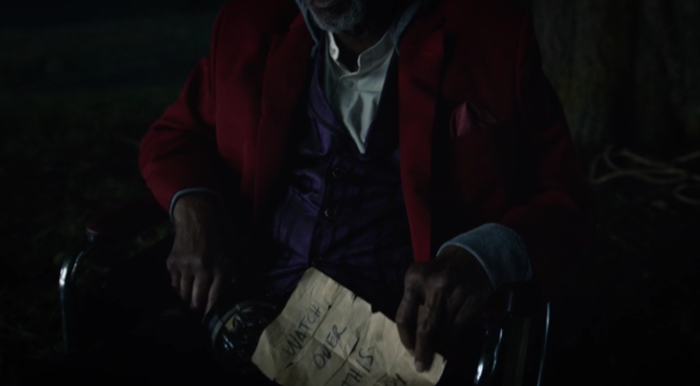 The question is: Why is he sitting next to the body of the hanged Sheriff? I am not sure yet, but earlier in the episode, Will asks Angela, “Do you think I can lift 200 pounds?” I think he is responsible for Judd’s death, and I think it’s because maybe Judd was involved with the Seventh Kavalry (I’m not sure he really appreciated “Black Oklahoma” all that much.)

There’s one more piece in the pilot to explore, and that’s Jeremy Irons’ eccentric character, who lives in a castle alone with his servants. Though the character is unnamed in the pilot, according to IMDB, Irons plays Adrian Veidt, one of the original Watchmen who also spearheaded a plan that cost 3 million lives but also led to an extended peace back in 1985 (he’s also probably responsible for those squid showers). He’s apparently chilling in his castle these days writing a play called The Watchmaker’s Son. The interesting thing about him is that the rest of the world believes he is dead. 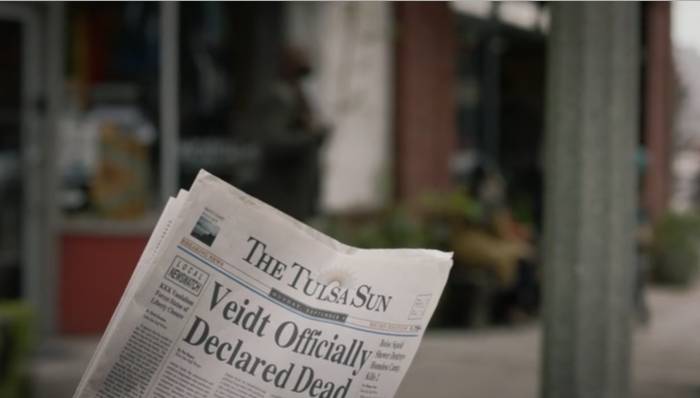 Where this series is headed over the next eight episodes is anyone’s guess, but if the pilot is any indication, Watchmen is the kind of show that’s more interesting and layered the more times you watch. I am hooked, and I can’t wait to watch the premiere again.

← 'Watchmen' and The 1921 Tulsa Race Massacre that No One Remembers | 5 Shows After Dark: 'Catherine the Great' Premiere HBO, '2019 American Humane Hero Dog Awards' on Hallmark →