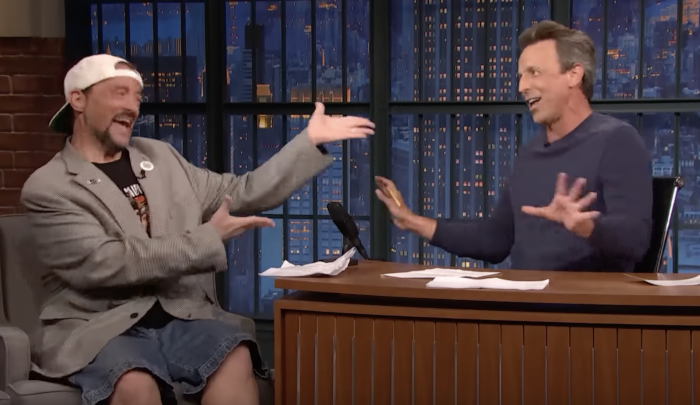 Watch Kevin Smith Force Seth Meyers To Do His Bad Impressions. All of Them

If you’ve watched enough of Seth Meyers’ “Closer Look” segments or his recurring feature, “Corrections,” you know that Seth Meyers does a lot of impressions. They’re not terrible impressions — you can still recognize who he is impersonating — but they’re not good, either, which is what makes them so amusing.

Here, Kevin Smith prepares a bit for Meyers that Meyers did not know he’d have to do. He was not prepared. Smith basically hijacks the show and puts Seth Meyers through the wringer, making him perform the “12 Days of Christmas” parody, “The 10 Days of Impressions,” which requires Meyers to pull out his bad impressions. All of them. Repeatedly.

It’s hysterical. I’ll spare you the setup (Smith talks about Clerks III, gives Meyers a comic book, etc.) and cue up the song. You may be tempted to fast-forward to the end, but please don’t rob yourself of this joy.