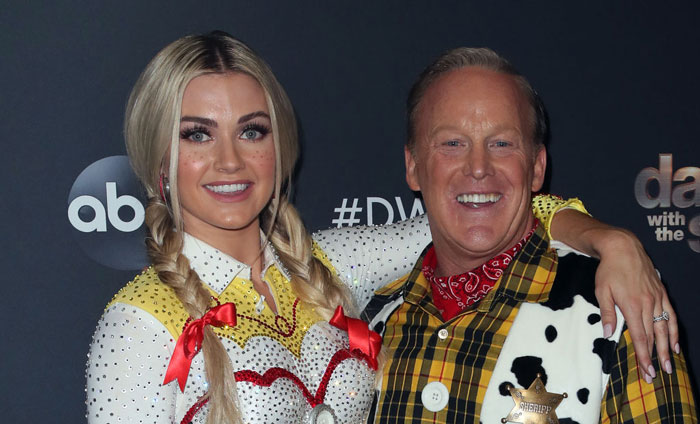 National disgrace Sean “White Man Can’t Dance” Spicer took to Dancing With the Stars to ruin Toy Story for you, when he dressed as Woody for an embarrassing quickstep to a jazzy rendition of “You’ve Got A Friend In Me.”

Watch it if you dare.

The Trump crony turned TV clown gleefully made a fool of himself busting out the moves your uncle with the bad hip might attempt after too many brewskies. And Twitter had thoughts.

This is your future.

What did Woody ever do to you, @DancingABC!? #SeanSpicer pic.twitter.com/yh0QZifACK

I WANT OFF THIS RIDE. pic.twitter.com/mc7G2lcLwV

Full disclosure: I don’t watch Dancing With the Stars. I never have before and I’m not going to start now when the fluffy series decides to treat politics like stunt casting. But according to WaPo, Spicer has survived on the series despite receiving the lowest technical scores from the judges. That’s because those scores are combined with call-in votes, you know, the kind Spicer made a Christian call-to-action and Trump requested on his Twitter account this week? So despite having no discernible skill and no apparent shame for his part in the Trump misinformation campaigns or his abhorrent lack of rhythm, Spicer is hanging in there.

Thanks to MAGA fans.

Vote for @seanspicer on #DWTS28 pic.twitter.com/qc0KYw4JKc

I hope you skipped breakfast before you read the hashtag Spicer uses to describe his fandom.

Thank you to everyone who voted for #TeamSweetNSpicey tonight. What an amazing @Disney night. On to next week. #DWTS #dwts28 https://t.co/atc2B2IOTl

Spicer repeatedly delivered lies to the American people in a misinformation campaign to prop up a bigoted and deceitful president who was once a comical reality-TV star. Now Spicer is a comical reality TV star. Things have come full circle, and the circle is made of shit.