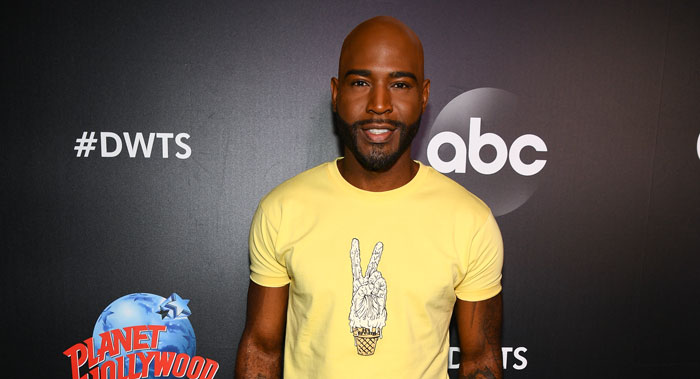 Remember how Sean Spicer was the head of propaganda for the Trump White House, blatantly spreading lies and bolstering a suspect president? Well, after his failure to become a successful author, he’s trying to parlay his horrid reputation into a quirky career as a TV personality. And the first step for this sour-mugged jar of near-sentient mayonnaise will be competing on Dancing With The Stars, where apparently the term “stars” has gotten very liberal. Speaking of liberals! Queer Eye co-host Karamo Brown, who two days back called Trump “racist in chief,” will also be competing on this season of the dancing competition. But sparks won’t be flying over politics, because Brown is pretty stoked to get to know Spicer. In press for the show, he called the national embarrassment “a good guy, a really sweet guy.”

Hear it for yourself.

Let me tell you something. Sean Spicer and I have been talking. I was most excited to meet him, because the thing is that people would look at us and think that we’re polar opposites. But I’m a big believer that if you can talk to someone and meet in the middle, you can learn about each other, and help each other both grow. And so we have been chatting all day today. Like, he’s a good guy, a really sweet guy. Exactly! Karamo from Queer Eye saying, ‘Sean Spicer, nice guy.’ I know!

Hey, @Karamo! Did you and Spicer talk about his complacency in the Trump administration and how he was willing to power through to represent Trump's plan, or was your all day talk about surface level bullshit like what coffee to get at Whole Foods and how we're all, like, human?

Famous queer activists sure do love to turn their backs on the community the moment it benefits them and plays to their privilege (why yes, this IS a subtweet about Karamo Brown agreeing to be on DWTS with Sean Spicer)

I’m officially starting the petition to replace #KaramoBrown on @QueerEye with @theebillyporter! I’d much rather listen to Billy build people up and help them be more confident in their own skin.

There’s no common ground with anyone having to do with the administration of the last 3 years. Fuck off.

Congrats on selling out every queer person in America that Spicer helped Trump hurt, @karamo. Hope stardom is worth it. https://t.co/JAMQfXDvUf

Get a fucking grip. There is no friendship with people who enable fascism.

In many ways, it's what happens when people cultivate an image of peace and love and constant positivity about goodness. Also, he's earning a lot of money to smile and be polite. Ellen had a bit in her recent comedy special about it.

The problem here is; the people working against your interests can appear to be really nice people on an individual, one on one basis. They can seem quite empathetic, to even appear to have your back, but when they give you that hug, they will be very quick to dagger your back.

@Karamo I love you ,but I’m super thrown off by you calling a man like Sean Spicer a “good guy”.Let’s not be blind 2 the fact that EVERYONE will smile in your face,that does not make them https://t.co/h8AqUIdf3o just makes them a coward,as they’ll do their dirt once you walk away

It’s only half way through the week
pic.twitter.com/QJH8i1b5Nl

First, I have no say who is on the cast and didn’t find out till this morning that he is on! But I’ll tell you this… I’m excited to sit down w/ him and engage in a respectful conversations. Only way things get better is if we try to educate those who have different POV than us.

However, there were some tweets he’s since deleted. Like this screenshotted response to Evan Ross Katz, whose tweet made the soundbite go viral.

Seems like @Karamo deleted his tweet to @evanrosskatz posting a video of him calling Sean Spicer a nice guy. I got you. Absurd: pic.twitter.com/GmFf4dazBF

In an another tweet—that has since been deleted—Brown tried to suggest he was taken out of context in the soundbite that went viral. So, here’s the full clip.

You’ll notice, the only difference is we hear the question leading into his praise of NICE GUY SEAN SPICER. And it wasn’t even a question about the infamous political puppet. It was a softball question of “Who do you think you’re biggest competition is?” Brown CHOSE to make this moment about his positive feelings about Spicer completely unprompted.

Responding to a now-deleted tweet, comedian Philip Henry responded with a thread full of spicy receipts. (Related: you should all be following @MajorPhilebrity)

GIRL. You are so far behind you think you’re first. Nothing here is out of context and you chose to say this with a camera and mic in your face. Two days ago you were tweeting about the “racist in chief” and now you’re calling his first spokesperson a sweet and nice guy. It’s odd https://t.co/rzr3mwgZLy

Sean Spicer lied about the inauguration, he gave credence to the idea that Obama tapped Trump’s phone without evidence and so much more. He served this country dishonorably and has never spoken out against the administration. He was a LEADING representative of its agenda @Karamo

The children who have died in cages, the rights of trans people being stripped away that you wanna bloviate about on Twitter and all thes other atrocities wrought by this administration is something Sean Spicer supported by choice and he’s PROFITING off of it @Karamo

And you being Black and gay running around helping him rehabilitate his image by calling him nice and sweet is disgraceful and normalizes Trump, @Karamo. Do you think he’d tweet Black Lives Matter and make you a hashtag if a cop shot you dead tomorrow? Wake the fuck up.

As important as the Queer Eye star says it is to engage with people who disagree with you, Brown wasn’t very open to Henry’s engagement. He blocked him.

Lolol that moment when you don’t like being criticized for cuddling up to person who enables fascism and who is actively fundraising for Trump 2020 and GOP candidates who wanna take away your rights. pic.twitter.com/8n7QmgxPql

Meanwhile, Brown is back to his pro-positivity business as usual. Here’s his latest tweet.

Wow this is amazing! https://t.co/iqkRUUNTk9