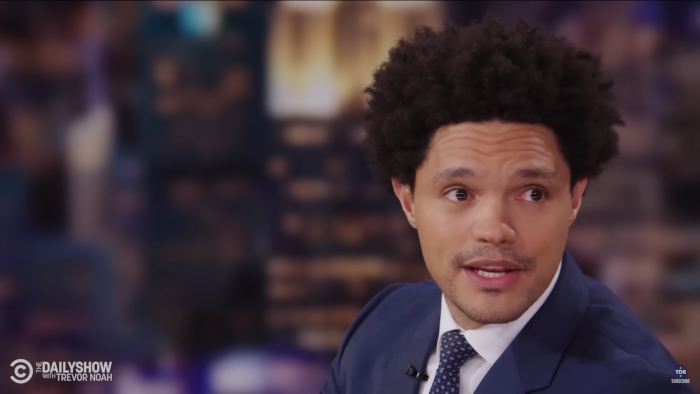 We are days away from Trevor Noah’s last night as host of The Daily Show. While his tenure hasn’t been long in the grand scheme of things, he held the desk through some of the most thrilling moments in what may be America’s Series Finale. What would Trevor be doing if he wasn’t behind the desk once occupied by Craig Kilborn? Was there a path outside of show business? Trevor thinks so.

When asked by an audience member what he would be doing if he wasn’t in the entertainment industry, Trevor knew the answer quickly. He loved building computers in high school, so that could be an option. But it’s his next answer that may be surprising. Noah would have wanted to be a salesman. That’s not a surprise necessarily. The dude is dripping with charisma; he’d be a great salesman. The surprise is the reason why.

Noah says that he would be a salesman to make sure people are more informed about what they are buying. It may not seem like a big deal, but to go into sales to help people, as opposed to just making money, is fantastic. Money will still be a part of it of course, but the sentiment behind the idea is so nice. It also leads to my favorite story of the moment.

Trevor recounted a time when he was in an NYC Best Buy and ended up helping an old woman pick out a laptop for her grandson. Not only is this an act of kindness, but it’s also a wonderful connection between two people in NYC. At a time when people are calling my favorite city a “war zone,” it’s nice to hear a story about how the city truly is. Just yesterday I had a wonderful conversation with a Mets fan and stranger (to me) while in a Rite Aid. It was one of the nicest chats I’d had in days. New York is great, people!

Trevor’s time on The Daily Show is almost up, but his spirit will be in it for years to come. Or until Comedy Central exclusively shows South Park reruns. Whichever comes first.


← Terrifying Future Horror Cult Classic 'Skinamarink' Gets a Release Date | Reddit Asks the Question: 'What is the Worst Candy?' →