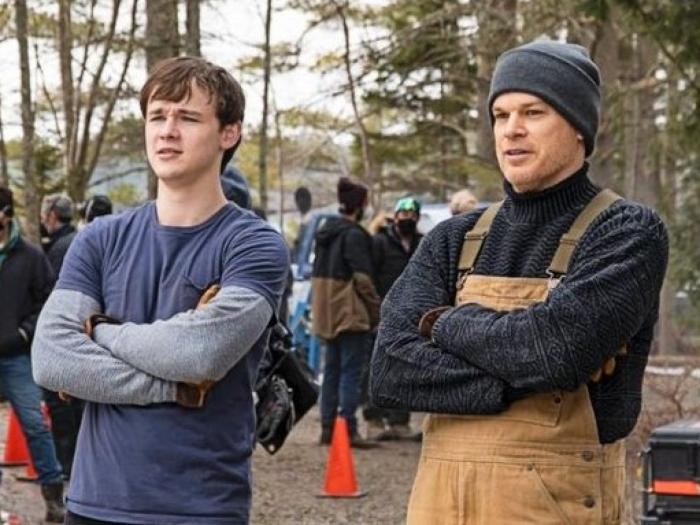 There's Only One Way 'Dexter: New Blood' Can End Now

Back in November, Dexter: New Blood showrunner Clyde Phillips said, referencing Chekhov, that the finale would be “surprising, inevitable, and satisfying.” Based on the penultimate episode of the season, there’s only one ending that will fulfill that criteria: Dexter is going to die. Harrison is going to kill him.

In this week’s episode, Dexter finally shares his secret with Harrison. He tells him about his Dark Passenger. He tells him about his dark urges. He tells Harrison about the Code, and he admits that he’s killed over 100 people. Initially, Dexter’s confession brings Harrison relief. He understands why his father had been holding back. He realizes that he’s not alone. He finds, in his father, someone who understands him. They had both been “born in blood,” and they are finally able to bond over their shared impulses.

Dexter then sets about teaching Harrison the Code: Don’t get caught, only kill people who hurt others, and ensure that you have proof of the victim’s wrongdoing. Harrison is quick to buy into the Code. He likens it to the vigilante justice of Batman. Dexter seems eager to share his wisdom; a little too eager. Dexter claims that he kills for all the right reasons, but he also expresses a level of wicked satisfaction in taking someone else’s life. Michael C. Hall delivers a perfect sneer whenever Dexter talks about murdering. It’s clear from the way that Dexter talks about the Code that the framework provided to Dexter by Harry is less about justice and more about satisfying Dexter’s urges. That Dexter prevents his victim from killing hundreds more people is not Dexter’s motivation; it is a fortuitous byproduct.

This all becomes clear when Harrison joins Dexter in taking out Kurt Caldwell. Dexter and Harrison discover Kurt’s underground lair, where he has kept scores of dead young women preserved in boxes like dolls. Harrison is all too happy to execute the Code in killing Kurt, and he has no reservations about watching his father plunge a knife through Kurt’s chest.

But before Dexter kills him, Kurt reveals something that changes Harrison’s perception of Dexter. Kurt tells Harrison that his attempted murder of him was not personal; it’s about revenge. Dexter killed Kurt’s son, so Kurt went after Harrison in retaliation. Dexter admits he killed Matt Caldwell, but Dexter claims it’s because Matt was bad, that he’d killed five other people.

It’s true that Matt’s recklessness led to the deaths of five people in a boating accident, but that’s not why Dexter killed him. Dexter killed Matt in a fit of anger after Kurt shot and killed a white deer. Matt was a douchebag, but Dexter had no proof that he was a serious future threat to the lives of others. In killing Matt, Dexter broke the very Code he’d just imparted to Harrison. Dexter had gotten reckless, operating outside of Harry’s Code, which fittingly makes him a suitable first target for Harrison.

If Harrison decides to live by Harry’s Code, it means that he has to kill Dexter, because Dexter is a threat to the lives of others. Harrison realizes that when Dexter takes a satisfaction bordering on the sexual in plunging that knife into Kurt’s chest. Dexter is a serial killer who only uses the Code to justify his murders. Harrison wants to follow the Code more purely, abide by it more honestly. To do so, Harrison has to learn from the sins of his father and kill his own.

I see the final episode playing out like a typical Dexter kill, one that will probably mirror the pilot episode, only it’s Harrison committing the act. Angela will arrest Dexter for the murder of Matt, but Dexter will escape on a technicality. But Harrison has proof — not only in Dexter’s confession, but the titanium screws Kurt sent to Angela. He abducts Dexter and creates a plastic-covered kill room for his father. Dexter will be equal parts resigned and proud. He will understand. He will appreciate the irony. He will be pleased that, even though he won’t be around to see it, Harrison will continue his legacy, but in a more pure fashion, the way that Harry originally intended. Dexter will be dead, but the code will pass to the next generation. It will be a surprising, inevitable, and satisfying end to the series and it will also leave room to continue it with Harrison in the lead role, should Showtime decide to keep it going.