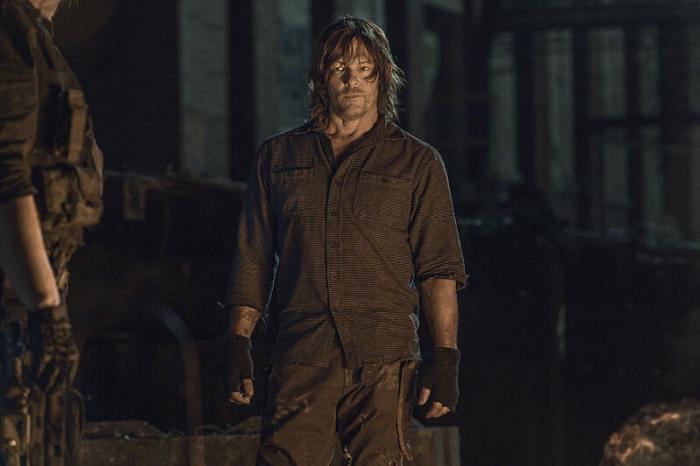 From everything I’ve read, when AMC decided to end The Walking Dead after 11 seasons, it came as a surprise not only to fans of the series but to those involved with it. They had it sprung on them and had to figure how to write a final season that is 24 episodes long and incorporate the last arc of Robert Kirkman’s source material into it (30 episodes if you count the six they tacked on to the end of season 10).

If the final season of The Walking Dead was a Broadway play, the Reapers would be the reprise. Everything about it is recycled: Random generic bad guys (The Wolves, The Terminus Cannibals); Daryl gets kidnapped (for the fourth time!), he works to take down the bad guys from the inside (which is what we saw with Eugene and the Saviors, and Negan and The Whisperers); a love interest for Daryl in Leah who is basically a boring combination of Beth and Carol; and a cult leader in The Pope, who is basically The Governor 3.0.

The thing about The Walking Dead is that it’s almost more interesting as a study of cults than it is a saga about the zombie apocalypse. The entire show is a series of cults, from Woodbury to Terminus to the Saviors to The Whisperers and The Commonwealth and now The Reapers (there’s been a couple of cults over on Fear the Walking Dead, as well). One day, a college student is going to write her thesis on The Walking Dead cults, and why they are the only ones who seemed to have survived the apocalypse. I just wish the writers had given her something more interesting in The Reapers to write about because woof. What an absolute drag.

The Reapers are all former mercenaries for the military, and they call themselves The Chosen because they all apparently survived a burning building. The Pope is their leader, and he’s played by Richie Coster, which would be cool if he weren’t a poor facsimile of The Governor. He believes that loyalty is paramount, which is why he pushed one of his soldiers into a fire and killed him even though he carried his dead partner 10 miles back to camp to give him a proper burial becuase he also got stabbed in the back. He wouldn’t have been stabbed in the back if he’d faced his enemy instead of running. It was a very dumb move (and also reduces their numbers from 15 to 14).

The majority of the episode, however, entails trying to torture Daryl into giving The Reapers intel about Maggie and the Alexandrians. Leah — an ex-girlfriend of Daryl introduced in one of those season 10 bonus episodes — also turns out to be a Reaper, and she helps convince The Pope that Daryl can be a good ally to them. Daryl, meanwhile, says and does all the right things (including pull Leah out of a fire) to gain the trust of The Pope and works himself into their little cult. Invariably, when Daryl takes them down from the inside, Leah will end up being her Dwight — a sympathetic turncoat. Where have we seen that before?

There is absolutely nothing we haven’t seen, and the only intrigue here is the promise of an inevitable showdown between The Pope and Father Gabriel, who has otherwise lost his religion. Otherwise, this has mostly been an unnecessary waste of episodes during what should be a much better final season, but which is starting to veer into Dexter/Sons of Anarchy final season territory.

Next week, we head back to The Commonwealth and the surer footing of Kirkman’s source material. I’m excited because they have cupcakes.


← People Uninfected by Covid Are Still Dying Because of It | 'Malignant' Review: A Self-Aware James Wan Gets Zany →