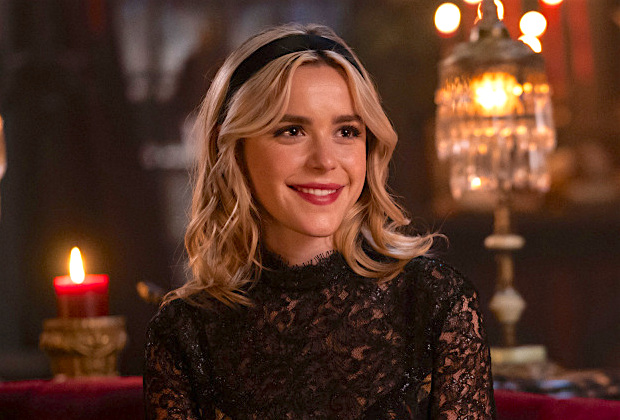 As hard as I’ve tried to quit Riverdale since the 7-year time jump, my curiosity continues to get the best of me. Every once in a while, I cannot help but to check back in. The last time I did so was the sixth season premiere, which killed off Archie. As it turns out, the episode took place in an alternative universe called Rivervale, which Riverdale showrunner Roberto Aguirre-Sacasa created, in part, as an excuse to bring back Kiernan Shipka, the title character from his other show, Netflix’s Chilling Adventures of Sabrina.

The Rivervale run is a five-episode “event” where Archie is indeed dead, but where nothing that is happening actually seems to matter because it all takes place in an alternate universe. The second episode was a series of ghost stories (where Toni died and became the “Lady of the Lake”); in the third episode, the characters struck bargains with the Devil; and this week’s fourth episode is a witch’s tale, which provides that opportunity for Sabrina to make an appearance.

The episode takes place in three different timelines, 1892, 1957, and the Present, which is a little confusing because all the characters in each timeline are played by the same actors, and Riverdale already has a timeless ’50s look about it. The three timelines each coincide with the arrival of, uh, Bailey’s Comet, which flies by Earth every 65 years. In the present day, Cheryl Blossom is caring for her grandmother, Nana Rose, who is on her death bed. Cheryl is helping her transition to the afterlife and part of that process involves telling the stories of Abigail (1892) and Poppy Blossom (1957), both played by Madelaine Petsch, who also plays Cheryl in the present.

In 1892, Abigail Blossom takes in a stranger, Thomasina Topaz (basically Toni), with whom she falls in love. However, a man named Finn — who we later find out is a serial killer who murdered Abigail’s brother — forces Abigail to marry him, lest he kill Thomasina. Abigail agrees, but on their wedding night, she goes Lizzie Borden on Finn and hacks into his chest a few times with an ax. Abigail, however, discovers that Finn had already murdered Thomasina. A bloody Finn stumbles in with a few gashes in his chest, compliments of Abigail’s ax, and before he dies, curses Abigail to an eternal life of loneliness. “May your life be as everlasting and solitary as the comet’s. May you remain unloved and alone for all of your miserable days.” Abigail lives out the rest of her life alone in Thornhill.

In 1957, Poppy Blossom gets wrapped up in the Red Scare after she advocates for the use of birth control, makes out with Bitsy (Betty), and tries to talk her out of having another child with her husband (Jughead). She ends up helping Bitsy have a second child and gives her an undetectable poison that Bitsy later uses to kill her abusive husband. Poppy, however, lives out the rest of her life on house arrest in Thornhill.

Here’s where it gets interesting/confusing. In the present day, Sabrina pays Cheryl a visit while Nana Rose is on her deathbed — Sabrina and Cheryl play in the same witches’ softball league (no, really). Sabrina is there to help Cheryl cast a “transference” spell before Nana Rose dies. Sabrina also explains that Abigail is a witch, and like Sabrina, witches never die. “I died and came back,” Sabrina says, which is apparently the only explanation Riverdale is going to offer about how Sabrina returned after the ending of The Chilling Adventures of Sabrina (spoilers: Sabrina died).

This is where it gets confusing: Sabrina helps to transfer Cheryl’s spirit into Nana Rose’s body before Nana Rose dies. But Cheryl is not Cheryl, and Poppy was not Poppy. Neither Cheryl nor Poppy exists; they are Abigail, who created Cheryl and Poppy in order to accommodate the immortality curse. However, by transferring Abigail/Poppy/Cheryl’s spirit to Nana Rose, she can finally die and be reunited with Thomasina in the afterlife. Nana Rose’s spirit, meanwhile, is transferred into the body of Cheryl, and now Nana Rose can live out her life as a young woman free of the curse. What happens to Cheryl? Nothing, because remember: Cheryl never existed!

Next week, Riverdale is going to somehow combine these two universes in “The Jughead Paradox.” I suspect Sabrina will be involved. I’d like to say that I’m not going to watch it, but I think we all know better.


← The Whitecloaks Are a Misogynistic, Existential Threat in 'The Wheel of Time.' Good | Let's Talk About That Jeremy Strong Profile →