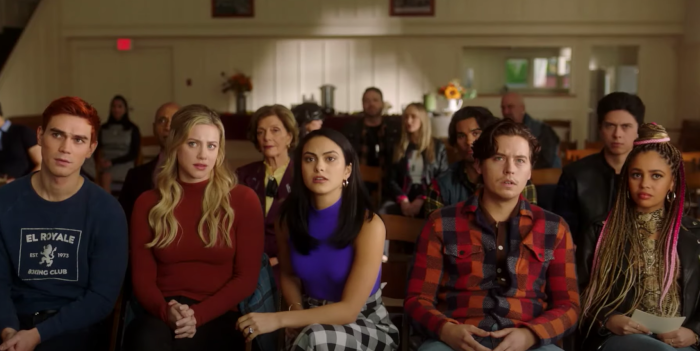 'Riverdale' Jumps 7 Years Into the Future, Gets Real Weird

The last season of Riverdale was abruptly interrupted by the pandemic, and so there were still three episodes to complete before the CW series could move on to the season 5 arc. I haven’t been covering it because, well, look around, so allow me to quickly catch you up on the last three episodes:

— Charles — the FBI Agent half-brother of both Betty and Jughead (who are still dating) — is revealed to be a serial killer (he has the same serial killer gene as Betty and Alice, although Betty’s father was the Black Hood). It’s cool, though, because he only kills bad people. Like Dexter.

— Jellybean (Jughead’s sister) is revealed to be The Auteur, the person who has been secretly videotaping the townspeople and sending them VHS tapes of those recordings. When FP Jones finds out, he decides to move back to Ohio with Jellybean and his ex-wife (Skeet Ulrich has now left the show).

— Hiram Lodge, who has been diagnosed with some sort of neuromuscular disorder, is retiring early.

— Penelope Blossom poisoned her entire family to death so that her daughter, Cheryl, could take over the family business. The family members died during a Zoom call (Nana Rose survived the purge, thank God!). Cheryl decided to stay back and take care of the family business while her girlfriend, Toni, went off to college.

— Veronica and Archie broke up after Archie revealed to her that he kissed Betty once. After failing out of high school (on account of spending much of his senior year in a prison fight club), Archie decided to join the Army. Veronica, meanwhile, left Riverdale for Barnard. Despite the break-up, she and Archie left on good terms.

— After solving the serial killer mystery, and The Auteur mystery, Betty and Jughead also drifted apart owing, in part, to Betty and Archie’s kiss. “I will always love you,” Betty said to Jughead, and I’m sorry, it was hard not to think about Lili Reinhart and Cole Sprouse’s break-up. It was sad! Betty and Jughead moved away to separate colleges.

— A year after graduation, Jughead returned to Pop’s Diner (which Veronica nicely deeded over to Pops) to meet the whole gang, but they were nowhere to be found.

That’s it. That’s season 5, so far. It’s also the end of Riverdale, as we know it. High school is done, and when next we see the Riverdale characters, it will be seven years later. Veronica will be married; Betty will be an FBI agent; Archie will be a war hero; and Jughead will be a novelist. They will be in their 20s, and finally playing characters much closer to the actors’ own ages.

As for the storyline? It looks like everyone will return to Riverdale in an effort to revive it after Hiram dissolved it. It also appears there’s yet another serial killer investigation. I’m not going to get my hopes up too high, but it also appears that Toni may finally become a lead character.