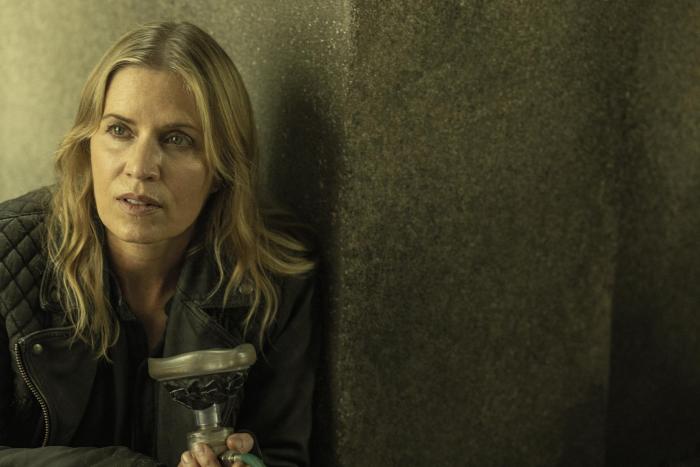 One hundred percent of the reason that it wasn’t another agonizing 45-minutes of television pain is that it used the finale to start a brand new storyline to set up the eighth season. Also, the primary focus was on two of the show’s best actors and characters: Lennie James’ Morgan and the return of Kim Dickens’ Madison Clark, who “died” in the fourth midseason finale. I’m not going to say it made a lot of sense, but at least it was vaguely interesting. 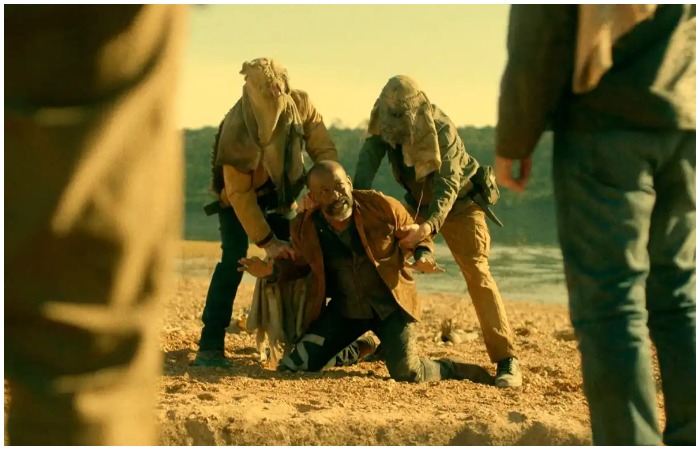 After rafting away with baby Mo two episodes ago, Morgan washes up … somewhere else (next season will be shot in Savannah, Georgia, so let’s say there). He’s soon confronted by a group of people who believe the baby in his possession is another baby stolen by a mysterious community called PADRE. This group of people have been locating other people involved with PADRE and burying them up to their necks in the sand near the ocean so that they can drown in slow, suffocating ways as the tide rolls in a la Creepshow. This is precisely what they plan to do to Morgan until Madison shows up and kills everyone in the group.

Then she steals Morgan’s baby.

As it turns out, Madison is part of PADRE, and she’s been spending the last few years stealing babies. PADRE is a new community that kidnaps babies from their parents because they believe they are better suited than parents to raise the next generation of kids because they remove emotion from the equation (The Walking Dead universe is, if nothing else, a hotbed of cults). PADRE basically told Madison that if she kept stealing babies for them, they’d reunite her with her son and daughter. However, after she stole enough babies, she bought into their ethos and decided she no longer wanted to be reunited with her kids. She continued to steal babies anyway. I guess everyone needs a purpose.

The thing about Morgan and Madison is that, though their time on the show overlapped for half a season, they’d never actually crossed paths on the series before. It takes a while, then, for Morgan to realize that Madison is Alicia’s mom. When he does, Madison tells Morgan that he can have his baby back but only if he steals another baby in its place (it’s like a baby-stealing pyramid scheme!). As luck would have it, Morgan had met a pregnant woman earlier in the day, so they decide to find her and exchange her for Morgan’s baby. Alas, the woman claiming to be pregnant was a honey-trap designed to lure out Madison. 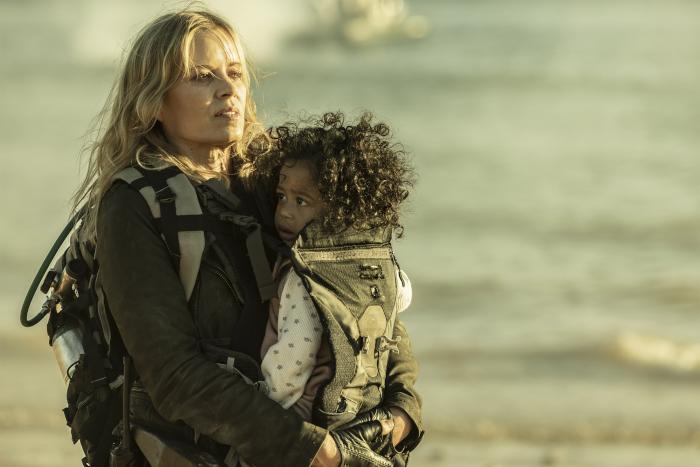 It works! They lure out Madison, who is still using supplemental oxygen after her near-death experience in a fire (she does not, however, reveal any of the details about how she escaped an inescapable situation in season four). They bury her in the sand near the ocean, and using intel indirectly provided by Madison, this group heads off to find PADRE, too. However, a few hours later, the same group washes up onshore as zombies near the vicinity of Madison, having been killed by members of PADRE.

This time, Morgan saves Madison and, having learned from Morgan that her kids, Alicia and Nick, are already dead, Madison decides to help Morgan retrieve his baby from PADRE. She takes Morgan back to her people, and her people decide to take them to the PADRE community. However, they are blindfolded first because apparently no one — not even the baby snatchers — is allowed to know where the community of children is located.

That’s where the episode ends, with Morgan and Madison on a boat speeding away to the location of PADRE’s settlement. We’ll have to wait until Season 8 to find out who the leader of PADRE is and how Morgan’s people — Victor, Grace, et. al — find them, and just how many of them will still be employed by the series. That should include showrunners Andrew Chambliss and Ian Goldberg, who have been driving the series into the ground for four seasons. It might be time to let someone else take a stab at it (and the TWD universe has a huge stable of writers from which to choose).

Alas, the showrunners have already told EW that “season 8 will have a very different environment from what we have seen before. And it will, in many ways, be centered around the water,” which sounds like what they tried — and failed — to do in season two. It’s telling that, after a dismal four-season run, they think they can do a better job with the same failed concept as the series’ original showrunner.