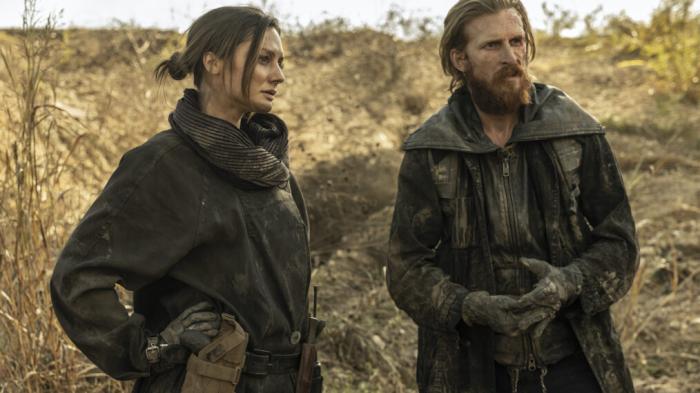 The Writers of 'Fear the Walking Dead' Have Given Up

Here are my random thoughts on “The Raft,” the 13th episode of the seventh season, a season that somehow gets progressively worse each episode.

— I don’t pretend to be an expert on radiation fallout, but apparently, the radiation is dispersed unevenly in the area in Texas surrounding where a nuclear bomb detonated. Every time a character is introduced, there’s a moment where the character checks their Geiger counter — because while there is no food in nuclear-zombie post-apocalyptic Austin everyone seems to have access to a Geiger counter. Every time, the Geiger counter suggests that in the spot in which they are standing, the radiation levels are safe, allowing the characters to remove their masks so we know who they are. If as many people had masks at the beginning of our pandemic as these people had Geiger counters, we’d have snuffed out COVID in the first weeks. 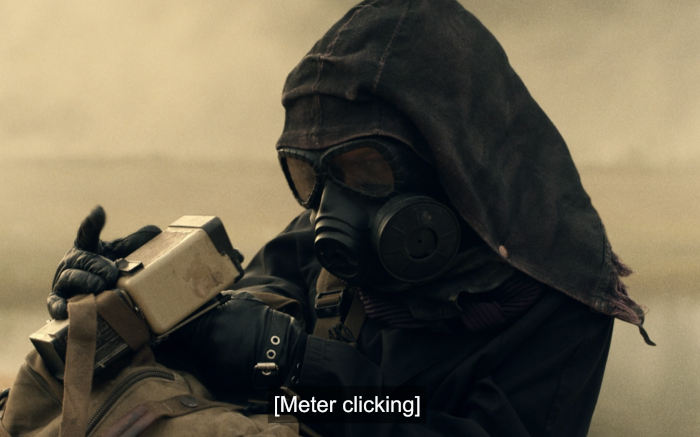 — This lady, whom we’ve never seen before, just arrived on a boat, which she has been on for days. She said she’s searching for her son who disappeared one night from her tent. If you’re a mother, and your kid disappears from a tent, what might compel you to think that your kid is several-days-on-a-boat miles away? Also, if she can so easily travel to a destination experiencing radiation fallout, why can’t ALL OF THE OTHER CHARACTERS leave the area and relocate to a safe one? Find a car or a horse or a bicycle or just walk to Louisianna or Arkansas or New Mexico. Why are these people so determined to take over The Tower, a building in a radiation fallout zone? 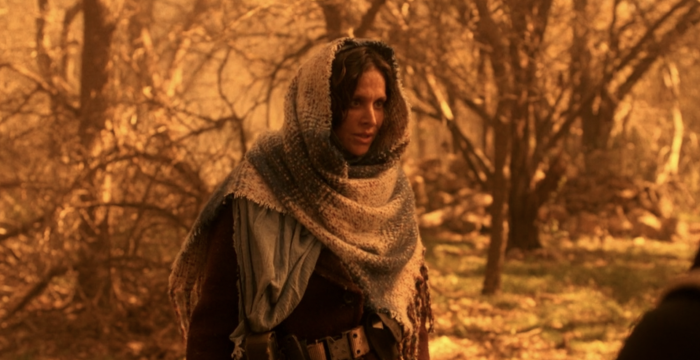 — Strand’s tower is protected by what is essentially a moat of hundreds of zombies so that no one can get in (leaving, however, doesn’t present any problem for some reason). In order to arrange for an attack on The Tower, Morgan single-handedly — while carrying a baby in a car seat — lures every single zombie away from The Tower. This trick has been pulled in other episodes in The Walking Dead universe. I recall one entire episode devoted to figuring out and executing an intricately designed plan to lure away a horde of zombies. Here? Morgan, while carrying a baby, basically just whistles and yells, “Come on, zombies. Follow me! Hey! Over here! Keep coming!” 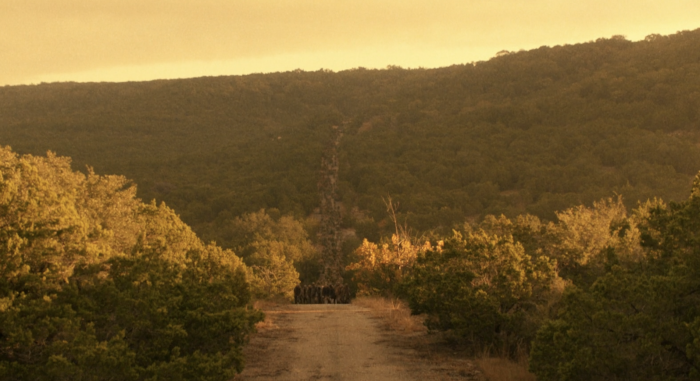 — At one point, a group of Strand’s rangers starts to shoot at Morgan, Dwight, and Sherry with a machine gun as the horde of zombies converges upon them. Instead of running, the rangers continue shooting at Morgan et. al, until the zombies kill them. It’s not like the zombies are fast. They ambled after Morgan for 20 miles while he was carrying a car seat with a baby. Oh, you have to see this car seat contraption they use to protect the baby from radiation. The baby spends the entire episode — hours and hours — in this contraption and never makes a peep. 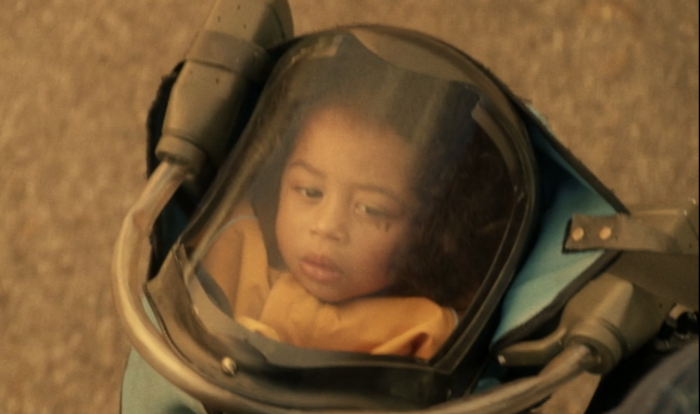 — This is Wes. He used to paint murals on trees (no, I’m not kidding), but a couple of weeks ago — for reasons that are too stupid to explain — he decided to join Strand and the bad guys. Strand sent him out to fetch the baby that Morgan took from The Tower because everyone thinks the baby represents the future or some such nonsense. Wes spends the episode pulling a gun on Sherry and Dwight and threatening to kill them if they don’t give him the baby. 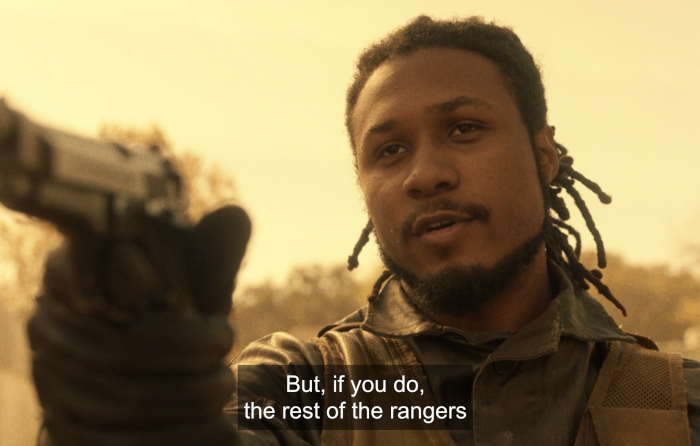 — This is Alicia. She’s probably second on the call sheet. She got bitten by a zombie, and although she managed to cut off her arm, she’s still experiencing infection-like symptoms (including high fevers and hallucinations). She’s managed to survive for weeks, and probably will continue to survive until production starts on Alycia Debnam-Carey’s new Hulu series! 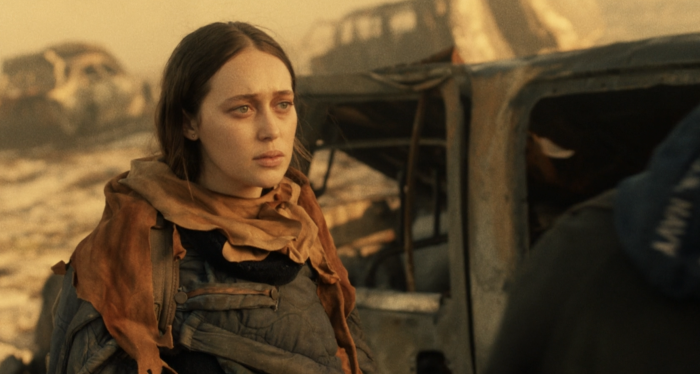 — The plan for Morgan and Alicia is to lure the walkers into a crater where there are hundreds of other walkers. But when they arrive, they find that someone has let the zombies out of the crater because I’m sure that hundreds of zombies who can’t turn a goddamn doorknob had no problem navigating this: 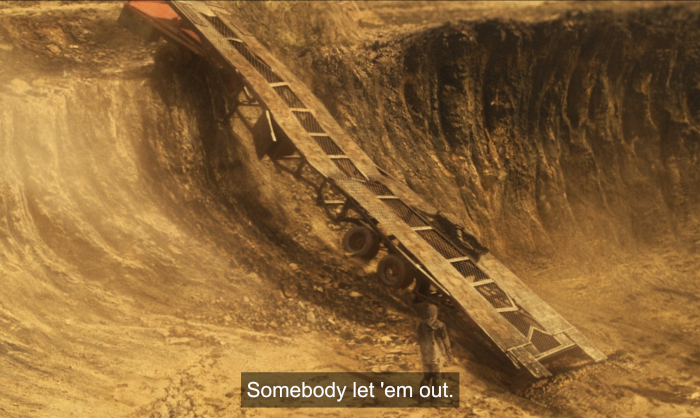 — When they’re not carrying around the baby, Dwight and Sherry spend most of the episode talking about how they’re doomed to lose in the war against Strand, which will prevent them from becoming the parents they want to be. Somewhere in the midst of this argument, Sherry reveals that she may be pregnant. She took a pregnancy test, but she hadn’t looked at the results yet. Every time they’re about to pull the (no doubt expired) pregnancy test out of her bag, Wes shows up and interrupts them. Dwight and Sherry end up having roughly the same argument four or five times in the same episode.

At some point, Dwight and Sherry decide to escape Wes by sneaking through what appears to be a concrete tunnel, which you can see here: 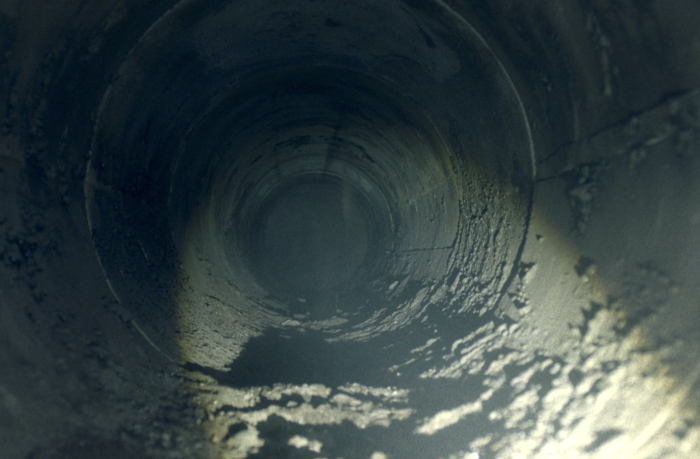 While the hundreds of zombies are walking on the ground above the tunnel, it “caves in,” although as you can see here, the tunnel itself is still completely intact. There’s just a bunch of stones suddenly in the way. Where did these stones come from? 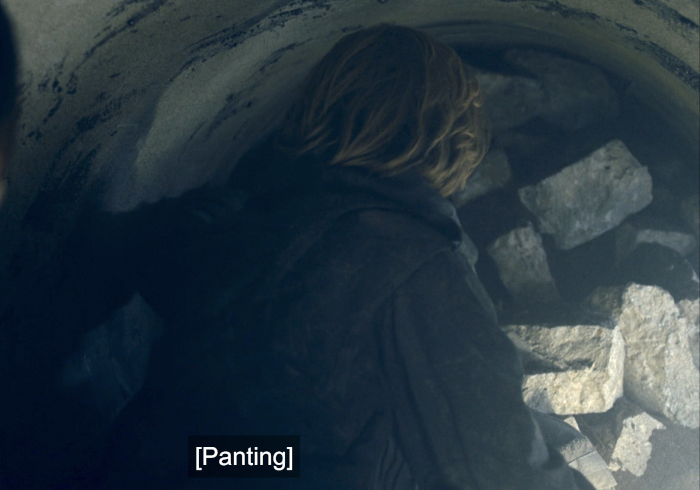 Dwight sees the stones, and figures they’re stuck, so they give up and resign themselves (and the baby) to death. However, before they die, Sherry pulls out the pregnancy test. It’s positive. They hug and kiss and celebrate, and then Sherry’s like, “WE’RE NOT GIVING UP. WE WILL GET THROUGH THIS BY STABBING THE ROCKS.” And they do! 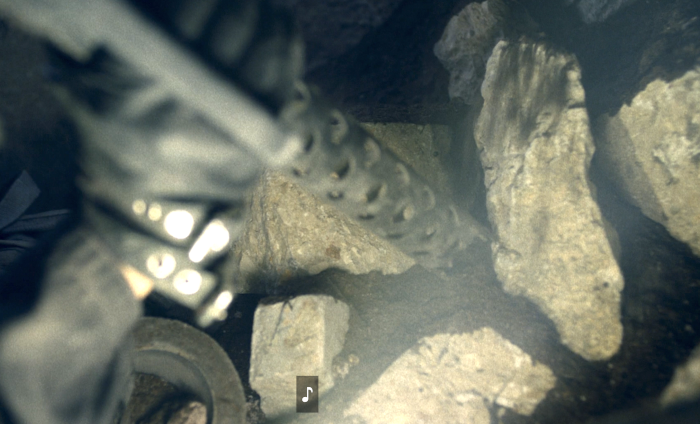 — When the baby was stolen from the Tower last week, Morgan’s girlfriend leaves a tape recorder in the car seat with her singing the baby a song so that Morgan can use it to soothe the baby. That tape also includes a hidden message telling Morgan to take the baby and run. At the end of the episode, that’s exactly what he does: He tells Alicia that he has to leave with the baby on a raft. Then, in the very next scene, he says, “No! I can’t leave you! I have to stay and help fight.” And then Alicia has to talk Morgan into leaving. WTF? He gets on a raft and decides to sail somewhere where there is no radiation. Why doesn’t everyone else do this? Can they not find more rafts? Because I bet they probably have them in the same place they found all those Geiger counters! 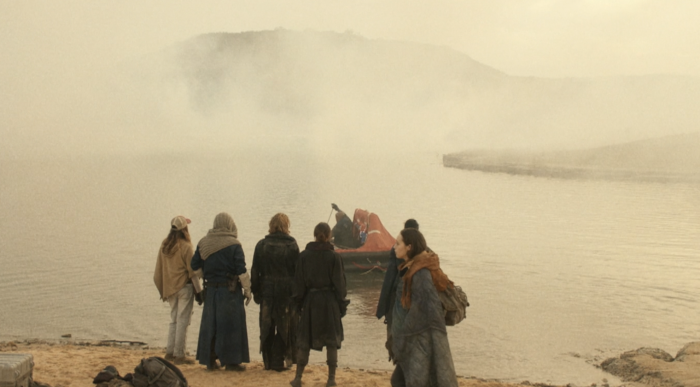 — The real question, however, is this: Why is Daniel dressed this way? 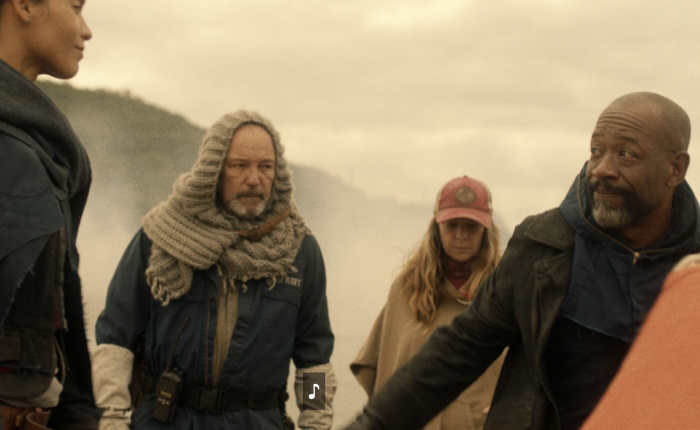 — It’s not clear where Morgan is actually going. Is he leaving the show? Drifting back to be on The Walking Dead for its final eight episodes? Or will he somehow come back in two episodes and go to war with Strand over The Tower? Or will everyone die in the war except for Morgan, who will set up camp in Georgia (where the next season is set) and start all over with a new cast? I feel like the latter is the most probable considering how everyone — including the showrunners — seems to be completely phoning it in this season, as though they’re doing the bare minimum to finish out their contracts.