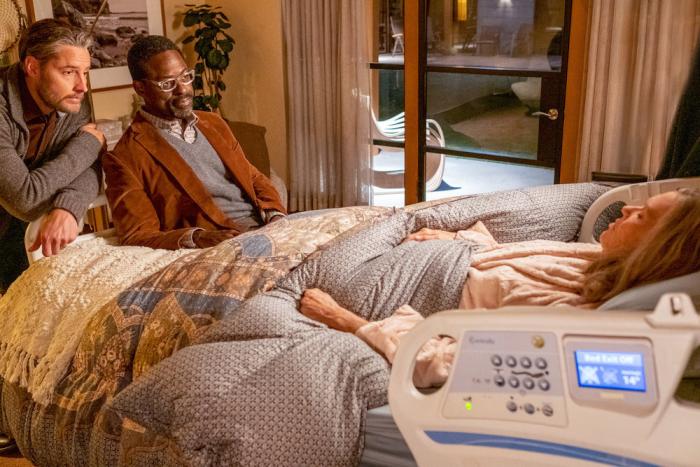 I almost managed to make it through the second-to-last This Is Us episode without shedding a single tear, but it was in recounting the episode to my wife — who bailed after the first season — that I finally truly succumbed to the show’s emotional manipulation. I couldn’t even get through one sentence without faltering. “William was there, see. And he was …. he was … leading Rebecca through a train, and then she got to the caboose, and … DAMNIT.” As she does nearly every week, she teased me mercilessly for allowing another episode to get to me.

Five minutes in and William shows up? Yeah, we're not surviving this episode! 😭 #ThisIsUsFinalChapter pic.twitter.com/dPt5EiVfx1

Even by This Is Us standards, this week’s episode went HAM on our tear ducts, fist-pounding them as though trying to destroy a punching bag. It is brutal. As the episode opens, the Pearsons — and the extended family of spouses and grandchildren — have gathered in the home that Kevin built for Rebecca. Rebecca’s nurse tells them that she probably won’t make it through the night (if only death were so clean-cut and predictable). Though she is not awake for it, it gives everyone an opportunity to say goodbye to Rebecca before she passes.

Meanwhile, an unconscious Rebecca is on a train in a dreamland where Randall’s late biological father, William, is her guide. He takes Rebecca from one car to the next, where she revisits moments from her past while saying goodbye in her dream world to the people in the real world sitting bedside who deliver their eulogic parting words. In her dream world, Rebecca is also having parting conversations with some of the people in her life, including — among others — the doctor played by Gerald McRaney who delivered their babies in the pilot episode. “What a thing you made of it all,” he tells her. “What a big, messy, gigantic, spectacular thing.”

She survived, and what a thing she made of it all. #ThisIsUsFinalChapter pic.twitter.com/vgPdFP5QYa

Outside Rebecca’s bedroom, the rest of the family is recounting memories of Rebecca. Deja, now a woman in what appears to be her late 20s, tells Randall that she’s pregnant (Malik is the father, naturally). She doesn’t have to tell Beth, because Beth “is her mother and knew even before she did.” Randall keeps commenting on the “dichotomy” between what he’s experiencing: The family laughing and joyfully remembering Rebecca in one room, while Rebecca slowly succumbs to death in another.

Kate, meanwhile, is flying in from Europe, and Rebecca holds on just long enough for her to make it back and say goodbye. It’s Randall, of course, who gives the final speech: “I love you, Mom. We’re good now. You made us good. So, uh, thanks for all the meals. Thanks for always making us feel loved.”

Back in her dreamworld, Rebecca — young and beautiful — arrives at the caboose. “This is quite sad,” she says to William. “The end.”

“Oh, I don’t know,” William says. “The way I see it, if something makes you sad when it ends, it must have been pretty wonderful when it was happening.” So trite. So treacly. So f**king true. Goddamnit.

“If something makes you sad when it ends, it must have been pretty wonderful when it was happening”… and with that, one last car. The caboose.🚂❤️ #ThisIsUs pic.twitter.com/5PbewsauTb

Then, having spent all of 12 seconds on a train car with Saint Miguel — only long enough for him to tell Rebecca that she is “his favorite person” (short-changed again!) — Rebecca walks into the final car. The music is swelling. In her room, the Pearson kids are crying. Randall tells her to say “hey” to their dad before she breathes her very last breath. Back in that bed in her dream world, she lies down next to Jack. “Hey,” she says. “Hey,” he says right back.

RIP Rebecca.
But that’s not what breaks me. Even if it was, whatever else you want to say about This Is Us, they earned our tears with six seasons of Rebecca’s big, messy, gigantic, spectacular life.
But no, that’s not what did it. I fell victim to the interweaving C-plot, the tacked-on story with characters we’ve never met, a cheap, manipulative storyline designed specifically to drop an anvil on our feels. In this storyline, a family is driving in their car. The kids in the back start bickering, as kids do, and the dad gets into a car accident. The whole family ends up at the hospital, but only one of the kids is seriously injured. He heads into surgery. It doesn’t look like he’s going to make it. His dad is shook. That’s when the dad meets Jack in the hospital right after Jack’s house burns down. Jack suffered some smoke inhalation but otherwise seems fine. Jack tells the dad something about finding sweetness in even your darkest moment.

Soon thereafter, as we know, Jack dies suddenly. Meanwhile, the kid miraculously survives and recovers, save for a severe limp. That kid grows up, and after a lot of fits and starts, that kid invents a drug to successfully treat Alzheimer’s and he recounts stories with his own family about the family motto, cribbed from Jack in that hospital waiting room. He, of course, cribbed it from Rebecca.

And do you know who that kid’s father was played by? My goddamn kryptonite: Dad Dulé Hill.

And this is where we all collectively lose our cool. 🤯 #ThisIsUsFinalChapter pic.twitter.com/3Infrir0eZ