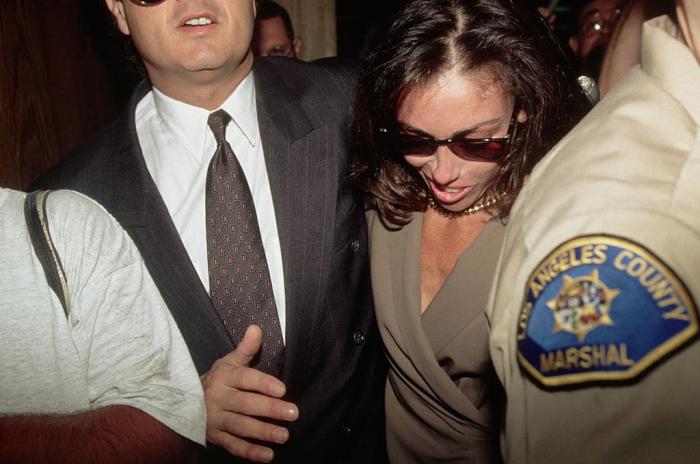 In 1993, the Los Angeles Police arrested Heidi Fleiss, one of the city’s most infamous madams, on various charges pertaining to her business. A former protege of Madam Alex, Fleiss quickly became one of the highest-earning sex workers in the city, bragging that she made her first million dollars after only four months in the business. Her arrest and subsequent trial became one of the most obsessed over legal cases of the ’90s, with much attention paid to her ‘little black book’ of rich and famous clients. Eventually, Fleiss was convicted of federal charges of tax evasion in September 1996 and sentenced to seven years in prison. She served 20 months in jail and performed 370 hours of community service. Nowadays, Fleiss lives a quiet life looking after abandoned exotic birds. You may have seen unflattering images of her used for ‘where are they now’ clickbait ads. Her story has been widely positioned as a cautionary tale for Hollywood sleaze, or a symptom of the city’s rot. For writer Molly Lambert, such assertions miss the point, and she’s sought to rectify the myth with her new podcast, Heidi World.

From iHeartRadio, Heidi World: The Heidi Fleiss Story sees Lambert and a massive cast of actors expand the story of the madam’s downfall to explore the deeper context that birthed her. Inspired by podcasts like You Must Remember This, particularly the excellent Charles Manson season, Heidi World covers a vast amount of territory over its brief season (ten episodes, of which six have been released, as of the writing of this piece.) To talk about sex is to talk about everything but sex, particularly within the dizzying ecosystem of American greed.

Fleiss, a born and bred L.A. girl, grew up as the daughter of a progressive pediatrician with various starry clients. She dipped her toes into the world of ’80s fame and money through friends and her growing pool of connections before befriending Madam Alex, who ran a successful sex work ring in Beverly Hills for two decades. It didn’t take long for Fleiss to strike it out on her own, accruing a stable of wealthy clients and workers who clamored to be on her books. If you only know her from the trial or her reality TV stints afterwards, hearing Lambert’s detailed biography of her life and ambitions makes for thrilling stuff. Actress Annie Hamilton provides the voice of Fleiss, with just the right level of husky allure to make you understand how people were so drawn to this madam.

Lambert, like Fleiss, is a Los Angeles native, and Heidi World spends a good amount of time creating an immersive portrait of the city that is more famous for the myth than its reality. Through Lambert’s gaze, we hear about the dingy but uber-cool rock clubs of the ’80s, the lavish new money homes of corrupt businessmen, and the studio backlots where more than movies are made. This is a world with an evident allure but one that’s often dismissed. Often seen as a dream factory, people forget that Los Angeles is a place where regular people live and thrive, and Lambert understands the need to include such details. Her work here feels like the offspring of Eve Babitz’s joyously piercing portraits of California, which provided a much-needed balance to the clinical gaze of the likes of Joan Didion, with a side-order of Paul Thomas Anderson’s Inherent Vice. This podcast may have a cast as big as that movie too. Everyone turns up to play someone of note: From Rian Johnson and Paul F. Tompkins to Richard Kelly and Lambert’s own father. To Lambert and Fleiss, L.A. might be the most thoroughly American city in the country.

It’s a real love letter to a much-misunderstood city, but it’s not a rose-tinted one. Lamberts sees the world that Fleiss navigates as a quasi-incestuous one defined by a curious mixture of unfettered sleaze and guilt-laden moralizing. Justice comes only for those with the cash to back it up, and loyalty is exclusively a conditional quality. The ’90s birthed the era of the reality TV trial, with 24-hour court programming allowing the nation to devour hours’ of legal business as entertainment. Fleiss’s case became front page news across the country thanks to her adjacency to celebrity, and Lambert dives into the ways that this combination helped to fuel the burgeoning cottage industry of broadcast courtroom drama.

But this is also a story about sex, specifically the industry of sex, and while much has changed since the ’90s, Lambert notes how little the needle has moved when it comes to the destigmatizing of sex work. Heidi World is thoroughly pro-sex workers’ rights, and through this lens, we see how Fleiss’s business (one of many in the city) operated as an open secret with the sword of Damocles always hovering overhead. Everyone wants to buy sex but the notion of someone turning it into a profitable enterprise without the involvement of men leaves many utterly aghast. You can sell the image of sex but not the act itself. As FOSTA-SESTA continues to further put sex workers at risk and remove them from safe platforms, Fleiss’s story feels depressingly relevant. What makes sex work more degrading or exploitative than having to work four jobs just to pay rent?

photo by Ron Galella (RIP) of Heidi showing off her loungewear line Heidiwear at a trade show pic.twitter.com/x1wX1qvqLF

Heidi World feels part of a recent trend wherein famously maligned women of recent history are being given their long overdue reconsideration after years as jokes or punching bags. It’s not hard to draw parallels between Fleiss and, say, Monica Lewinsky, another woman shamed worldwide for her participation in a sexual situation. Yet many of these current examples have flattened the women in question to fit neater narratives of who does and doesn’t deserve our sympathy (see how The Eyes of Tammy Faye essentially infantilized Bakker rather than portray her possible culpability in her husband’s illegal activities.) Lambert doesn’t do that. She clearly admires Fleiss’s ambition and charisma but doesn’t dilute her history to that of a mere pawn of men. She’s a flinty figure with a shameless streak that now seems so mundane yet was sneered at as desperate by those who once bowed at her feet. Her biggest crimes seems to have been getting cocky.

I’m a sucker for deep-dive podcasts about Hollywood and Heidi World is one of the best I’ve heard in many years. Lambert wants you to understand the much-discussed yet seldom understood underbelly of Los Angeles and see it as the id of America. It’s also a call to arms. That sex work has yet to be decriminalized is a massive failing that keeps the workers marginalized while mega corporations and the legal system make major profits from the system they enforce. We may never see another Heidi Fleiss but that blend of celebrity, sex, labour, justice, and hypocrisy is as American as apple pie.

Heidi World is available wherever you get your podcasts from. Molly Lambert also has a Patreon for the show.

← 'The Bros' Trailer Promises Gloriously Hot, Gay Summer Action | The Cruel 'This Is Us' Writers Deliver a Doozy of a Penultimate Episode →