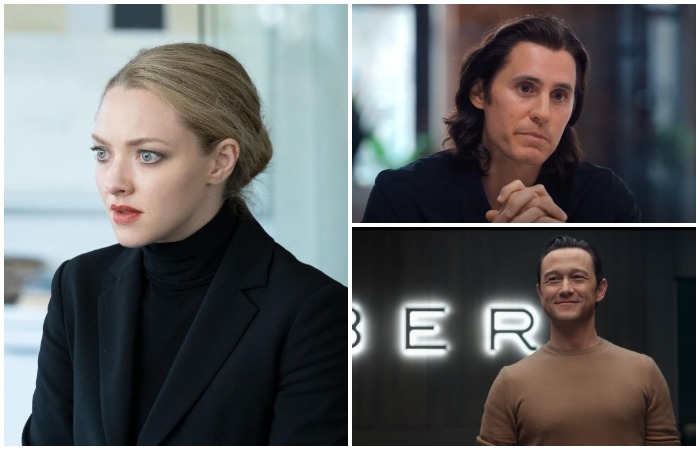 The Best & Worst of the Scammer Series: 'The Dropout,' 'WeCrashed,' and 'Super Pumped'

If you’re into scammers, the prestige networks and streamers have been keeping you busy. Netflix has Inventing Anna, Showtime has Super Pumped: The Battle for Uber, Hulu has Elizabeth Holmes’ The Dropout, and Apple TV+ premieres the first three episodes of WeCrashed tomorrow. Here’s a brief rundown of the best and the worst.

Disposing of the third-best of the bunch, last month’s Inventing Anna (review here), the best of the lot is Hulu’s The Dropout, and it’s not close. Thanks to books, podcasts, and the trial of Holmes, it’s the one whose details are more publicly known, but it makes The Dropout no less fascinating a character study. Amanda Seyfried’s Holmes is also the figure who feels most real, while the others feel like exaggerations or caricatures even if one, in particular, is not (Jared Leto’s Adam Neumann). (Kate McKinnon, originally cast in the role of Holmes, would have made her feel like a caricature and would’ve also ruined the series.)

Holmes is also the least repulsive, which is not to say that her grift wasn’t as egregious. It was probably the most consequential — real lives were lost — although ironically Holmes also had the least to show for her efforts (Uber and WeWork, after all, still exist, while Theranos never amounted to anything more than a good idea). Her case, while not relatable, is at least easier to understand: She was so blinded by her ego and ambition that she lied (or hid the truth) to scam investors into giving her money for a product she thought she could produce, but each of those lies snowballed into bigger and bigger ones that backed her into a corner until her house of cards finally collapsed when she could not produce the medical device that she had promised. Those lies required her and her business partner, Sunny Balwani, to deceive and mistreat not only their investors but their employees, who were routinely fired so that Holmes could maintain the fiction.

There’s nothing sympathetic or likable about Holmes in The Dropout, but at least she’s surrounded by other characters with whom we feel some compassion (most notably Stephen Fry’s Ian Gibbons), while creator Elizabeth Meriwether and the director of half the episodes, Michael Showalter, bring some levity and even the occasional laugh to the proceedings. Holmes is a fraud, but at least there’s a modicum of intentionality behind her actions.

The same can’t be said for Travis Kalanick or Adam Neumann, the men behind Uber and WeWork, respectively. Despite the miscasting of Joseph Gordon-Levitt, Kalanick is the more interesting of the two, if only because the series — narrated by Quentin Tarantino — is a fast-paced and entertaining ride through the rise of Uber, the soundtrack (frequently featuring Pearl Jam) is excellent, and Kalanick is fun to root against. Super Pumped provides a somewhat sympathetic character (despite his billionaire status) to ally with in Kyle Chandler’s Bill Gurley, even if “rooting” for him mostly amounts to seeing Burley put a cocky punk in his place. Kalanick is a horrific human being, but to his credit, he’s less a grifter than a frat-boy bullshit artist whose ego, ambition, and refusal to accept the advice of others allowed Uber to succeed. Kalanick steamrolled a lot of people to ensure Uber’s success, but it is worth noting that Kalanick was not brought down because of business failings or fraud — he built a house of cards on a stable foundation — but because of the toxic work culture and harassment he allowed to flourish in his company.

None of these people learned that treating others like sh*t will eventually bite them in the ass because in every one of these shows, the “creators” or “disruptors” are ultimately brought down, at least in part, by someone (or someones) they wronged.

That is true of no one more than Adam Neumann, the least entertaining, the least sympathetic, and the most detestable of all the characters, and not because he’s played by Jared Leto. To his credit, I’ve watched interviews of the real Neumann, and Leto is excellent in the role, and that’s a large part of the problem. Neumann is even more awful than Leto, and Anne Hathaway’s Rebecca Neumann is no less loathsome. They’re not even fun to root against; they make your skin crawl.

It doesn’t help, either, that WeCrashed is the least interesting of the stories. Does anyone even care about WeWork? Neumann took an established idea — shared workspaces — and basically franchised it like an Applebees but convinced his employees, investors, and even customers that a roomful of desks, a ping-pong table, and a cappuccino machine was a “lifestyle.” He convinced enough stupid bankers and billionaires that his company was worth more than it was, which allowed him to raise the money necessary to buy more property and continue to grow even as the company continued to bleed money.

Adam Neumann is the Donald Trump of tech start-ups (ironically, he also helped Jared Kushner with Kushner’s “Middle East peace plan”), and he might have pulled it off if he hadn’t lied so egregiously (he told bankers ahead of a potential IPO that a $10-$12 billion company was worth $45 billion), if he hadn’t flaunted an appallingly lavish lifestyle, overextended himself, and treated everyone around him so poorly while — again — refusing the counsel of others. Adam Neumann is an odious con artist, and Rebecca is the worst kind of new-age hippie (the obscenely wealthy type (that she’s cousins with Gwyneth Paltrow is no coincidence)), and the worst part of WeCrashed is that he was rewarded with $1.7 billion dollars when he was pushed out, a necessary action to keep WeWork from bankruptcy. There’s no real comeuppance here because that would require shame, and people like Adam Neumann do not experience shame, which compounds the boring rise of WeWork with an unsatisfying ending. WeCrashed may be well made (by Lee Eisenberg and Drew Crevello), but it is a bad show about bad people who do bad things and are rewarded for it, which makes it easily the worst of all the grifter shows.

← Who Is Kamala Khan, Why Did Disney+ Change Her Powers, and Why Are People So Mad? | Daniel Radcliffe Says No to Harry Potter 'Cursed Child' Movie →