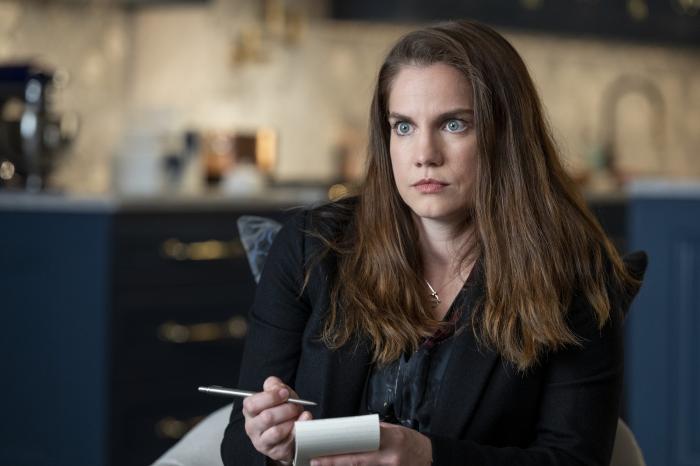 The Most Compelling Anna in Netflix's 'Inventing Anna' Is Anna Chlumsky

I knew very little about Anna Sorokin — better known as Anna Delvey — before watching Inventing Anna, aside from mentions in a few pieces written by Kayleigh three years ago covering some of the topics taken up by the Netflix series. Knowing, however, that it was based on a piece in The Cut was an enticing carrot to help propel me through the series (not that I needed any encouragement). From the opening episode, I wanted to see how much of the Netflix account was based on the true story (more than you’d think), but I didn’t want to spoil the rest of the series by reading the piece. I binged my way through in a couple of sittings, but by the end, I was far more interested in knowing more about the journalist played by Anna Chlumsky, Vivian Kent (based on the real-life investigative journalist Jessica Pressler, who also wrote the piece upon which Jennifer Lopez’s Hustlers was based).

Kent and her story is our entry point into Inventing Anna. Kent’s career as a journalist was stalled because of a controversy over a fact-checking error in a listicle and she’s determined to write the story that will salvage her career and move that mistake down the Google search results page (in reality, Pressler lost a job at Bloomberg over the same fact-checking mistake discussed in the series in a story that has moved off of the first page of results). In the series, she’s been abandoned to Scriberia — a section of the office reserved for has-beens and hangers-on — until she takes her maternity leave at Manhattan Magazine (standing in for New York Magazine’s The Cut). It creates a deadline and some artificial stakes for Kent to deliver the story before her career is derailed, potentially for good (in reality, Pressler gave birth two years before she covered Delvey).

The story that she attaches herself to over the objections of her editor is about a mysterious woman posing as a German heiress who scams several hundred thousand dollars out of a few friends and four-star hotels that accommodate her for weeks without a credit card because she convinces them she is good for it. As far as anyone else knows, Anna Delvey is a 25-year-old heiress who is about to come into millions of dollars from a trust fund, although in the meantime, her father is being intermittently stingy with her allowance and credit cards.

As Soul Asylum once sang, “Nothing attracts a crowd like a crowd.” Likewise, nothing attracts money like the illusion of money, and all that Delvey has to do is surround herself with the right people and attend the right parties to convince those very people that she is one of them. To many of the people with whom she associated, $10,000 here and there is the equivalent of loose change in our sofas, so several thousands of dollars in credit card charges would take months to be noticed, while Delvey can also travel and dine on the tabs of her friends. In the meantime, what money Delvey does have (source: unknown), she converts into $100 bills she hands out as tips to further the illusion of her wealth.

It’s a house of cards destined to fall, but Delvey hastens the crash by attempting to take out a loan for $20 million to fund the Anna Delvey Foundation, a luxury space she’s planning for wealthy artists. It turns out, you can fool your friends, you can fool bankers, architects, restauranteurs, and designers, but you can’t fool the underwriters. Moreover, no matter how many $100 bills you drop, those hotels are eventually going to call in their tabs.

Kent’s story is less about Sorokin’s grifts and more that she managed to scam all these wealthy people. Why were they so easily manipulated? And how did a middle-class Russian immigrant (with a terrible accent) pass herself off as a socialite? I thought it was fascinating, while also understanding that the whole story is superpowered by Shonda Rhimes’ particular brand of insanely watchable trash tv. Rhimes has always been great at writing first seasons before her shows fall apart (or run with diminishing returns for 17 seasons), so the limited series format of Inventing Anna is perfect for her. There’s not enough time to jump the rails!

Still, I was less invested in Anna — who remains opaque until the end — and more won over by Vivian Kent, whose account is more detached from the true story. I love Chlumsky, as well a good journalism yarn — tracking down and interviewing sources against the clock, under editorial pressure, while navigating ethical boundaries and trying to save your career — so Inventing Anna works best in that respect (after all, you can glean most of Delvey’s story from Pressler’s original article). It is worth noting, too, that whatever the hell accent Julia Garner uses as Delvey, is apparently accurate to the source. Garner is so good that it didn’t take more than a few minutes to separate Delvey from her equally over-the-top Ozark character. It’s a solid supporting cast, too, with a number of Shonda Rhimes regulars (Katie Lowes, Jeff Perry, Josh Malina, Kate Burton), so much so that it often felt like a Scandal reunion. It’s fitting, too, because in some ways, Inventing Anna is as easily digestible and enjoyable as that of can’t-miss first season Scandal even if, in the end, it feels a little hollow.


← Should We Prepare for an Attempted Comeback by Armie Hammer? | 5 Shows After Dark: 'Olympic Winter Games' on NBC, 'Icahn: The Restless Billionaire' on HBO →