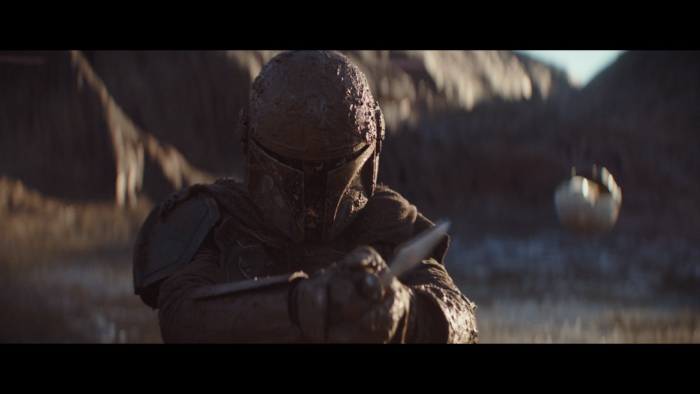 The Best Thing About 'The Mandalorian' So Far

[Warning: Spoilers below for episodes 1 and 2 of The Mandalorian]
I saw Star Wars in the theater, in May of 1977. Fell in love. Haven’t ever looked back.
When I write about Star Wars, it’s with a certain reverence. Though the world has changed and expanded over the years, though we’ve gone from Lucas’ vision to the Disneyfication of the property, I still love it.

We all come to the Star Wars table hoping for different entrees. That’s understandable. Some people want strict adherence to the original story line. Some people want new planets and new characters. Some people don’t think Rey makes sense unless she has Skywalker blood. Others lament the lameness and sameness of a world where the blood you’re born with is the only thing that dictates your ability to harness the force. The only thing everyone seems to agree about is midichlorians, which is too bad because my blood is chock full of ‘em.

I’m sure that there’s a group of people like me who are a little grungier in their tastes. I tended to enjoy The Clone Wars animated series more than the Prequels or many of the Disney-helmed offerings. Ahsoka Tano, for example, is my girl forever and ever and she doesn’t get anywhere near enough credit. I died a little in The Last Jedi when Luke tossed his lightsaber over his shoulder. In fact, my favorite moment of that movie was the unnamed little boy with the broom scene.

I still get chills watching that.

But what do I long for in the Star Wars world? What would be my wish if I could see anything in that universe?

And a new bad guy.

Preferably a bad girl, actually. I read a while back that Darth Vader is the most recognized fictive character it the whole world. And boy, has he been a good one.

But where’s the next one? The holographic dude in the big chair? Darth Gollum? What about Kylo Ren? Eh. He just comes nowhere near the level we need in my opinion. Love Adam Driver. Like many of the character choices, but he’s not that imposing big bad we need.

The Woman Sith we need? I can’t say for sure, but building off of my girl Asajj Ventress wouldn’t be a bad place to start. She took on Anakin and Obi Wan at the same time and lived to tell the tale. Hot damn that’s a warrior. 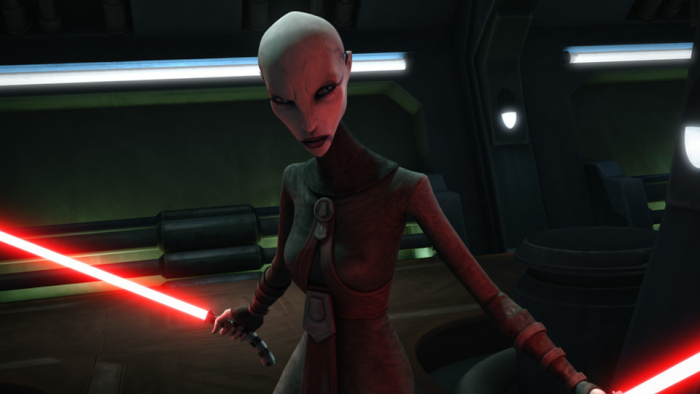 I’ve grown up with Star Wars, it’s just sometimes I want the story to grow up with me. That said, it’s not likely to happen. George Lucas, appearing on “James Cameron’s Story of Science Fiction’ reiterated that he created Star Wars for twelve year olds. And yesterday I was listening to Bob Iger’s ‘Masterclass’ where the Disney chairman cautions against the radical changing of a brand. Taken together, I’m not getting an NC-17 Star Wars anytime soon.

But! A new series following a lower-level bounty hunter? Hell, that sounds gritty in a Rogue One sort of way.

Which brings me to ‘The Mandalorian’. I came in very excited to see a smaller, darker story, and so far I’ve enjoyed it. I love Tori’s recaps. The reviews among my peer group, though, have been wildly varied. On one side, friends calling it ‘super-cringey-bad’ and lamenting what they consider to be sub-standard directing. On the other side, friends finding it calming and engaging. Sometimes that’s a clue for ‘slow.’

I admit, I had my concerns after the pilot. It was a bit plodding, and I didn’t love the cold open. The Mandalorian comes into the wannabe-Hoth cantina, and rather than approaching his quarry, he goes and stands silently at the bar. This angers the 80’s bad-guy movie bullies, who bark at him and stupidly move to rough him up for no reason other than his entering caused Generic Bully #1’s Pabst Blue Ribbon to tip over.

That’s like a couple of local drunks chirping at a navy seal when they know he’s a navy seal. The local toughs in the bar called him ‘Mando’, so it’s not like they didn’t know who or what he was. That’s kind of a tired trope to start a series with, but okay.

What I did like was that the Myrthol in the bar, the blue dude (played by Horatio Sanz- I didn’t know that) was about to get his face cut off. Hellllll yes! They were eyeing his “glands” and saying they’d fetch a good price. That’s some heinous shit right there and exactly what the doctor ordered. And not because of the graphic violence, because of the setting: THIS IS A WORLD WHERE YOU COULD GET YOUR FACE CUT OFF JUST FOR GOING TO A BAR.

This is a world where Salacious B. Crumb’s cousin, a sentient creature, has to wait to be roasted alive. No one is coming to help him. He gonna die. 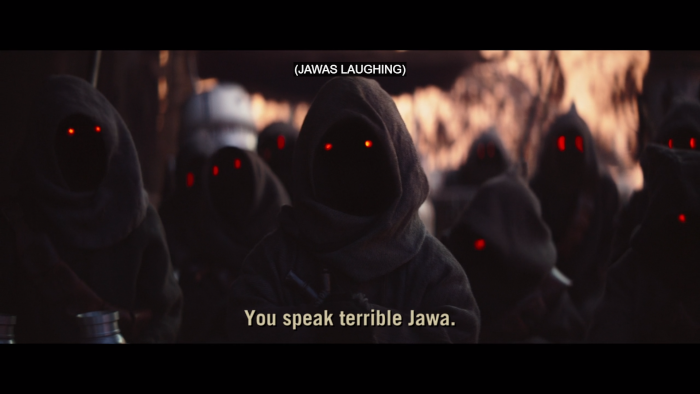 This is a world where Jawas mock your poor language skills and in return, The Mandalorian tries to BLOW TORCH them. Holy shit I looooved that. Little bastards are making fun of him and he shoots fire at them. In the middle of a negotiation. Love it.

And the Jawas shake it off and keep negotiating. This is a world where you might get fire shot at you in the middle of a negotiation. That rocks.

The western storytelling architecture and the ‘hero with no name’ are nice elements and Carl Weathers as Greef Carga is always ready to get a stew goin’.

But the best thing about The Mandalorian so far? The dude isn’t overpowered. He’s not some OP Marvel hero. He sucks at Jawa. His car is shit and has no alarm system. He has no natural ability taming mounts. He’s not much of a conversationalist. I’m not sure anyone would want him as their +1 at a party. And combat? The only people he dominated were the drunks in the bar. In two episodes, we’ve already seen him get his ass whooped and be in over his head four times. First, with a couple of weak-ass Blurrgs! If the Ugnaught Kuiil didn’t show up when he did, this would have been the shortest Star Wars series ever.

Fail #2 was against the Black Sun thugs or whomever those raiders were that had The Green One. If IG-11 wasn’t there, no way he storms that compound. He would have died the same ignoble death as the bounty hunters who preceded him did.

In episode 2, when he scales the Jawa fortress, he gets his ass blasted to kingdom come at the top. That was fan. Tastic.

And again, in episode 2, the Elasmotherium-looking ‘Mudhorn’ absolutely decimates him. These are all outstanding developments. Not only because they set the range of his abilities for a visual audience, but they also give him lots and lots of room to grow.

Likewise, the show has done a stellar job of laying out his weapons and abilities. The zipline thing. The forearm Boba-esque flamethrower. His blaster. His rifle.

So, when we see him fighting the Mudhorn, we’re not waiting for him to feed it a proton grenade or use his extending shock staff to electrocute it because he doesn’t have either. That type of knowledge is helpful and instructive for an audience. Dude has a rope, a firespray, a boot dagger, a big gun and a little gun. The end.

The header picture, where The Mandalorian is beat? That may very well be the shot where I fell in love with this show. He’s done. Dazed and nearly unconscious. The Mudhorn is charging. He has nothing left in the tank. He’s going to die. Somehow he slaps at his boot, pulls out a little knife and holds it in front of him. Goddamn I loved that.

As we go on, I’m certain the series will not be all things to all people. I’m not sure how the word “puck” enters the Star Wars lexicon without hockey, but okay. I’m not sure if what seem to be very predictable upcoming plot points will manifest that way, and if they do, will they somehow still be satisfying? I’m not sure if Pedro Pascal’s walk is as badass and outlaw-y as I like. He’s a stud, don’t get me wrong, but sometimes the Mando moves like a dancer to me. He got them swishy hips. I’m not sure when online fanboys will stop ending every post with “I have spoken”. I’m not sure about all the muppets.

But so far I’m having fun, and I find myself eagerly awaiting the next episode. Yes, The Green One is preposterously cute, but let’s not explore what happens to adorable babies in the Star Wars for Adults world I crave. You see that Baby Yoda and it embodies cuteness. I see that Baby Yoda and I think of the $24.75 I’m already out having to buy that plush for my kids this Christmas.

New episodes drop on Fridays with the exception of the week ‘The Rise of Skywalker’ opens. (Then it’s on a Wednesday). So far The Mandalorian is a character I can get behind. Fallible. Willing to take and ask for help. Flawed. And like a Purdue turkey in the oven his motherfucking signet hasn’t popped yet. I don’t know what that means, but I’m excited to find out. That and the newly rebuilt Razor Crest (that would have taken six months to put that puppy back together again) kind of reminds me of The Unreliable from ‘The Outer Worlds’.

Added all up, it may not quite be the series I’ve been dreaming about, but it’s making strides in many of the right directions, and even if it gets terrible, I’m still buckled in for the whole ride. There may very well be people who can get too much Star Wars, but I will never, ever be one of them.

Thanks for reading, and may the force be with you. Always.