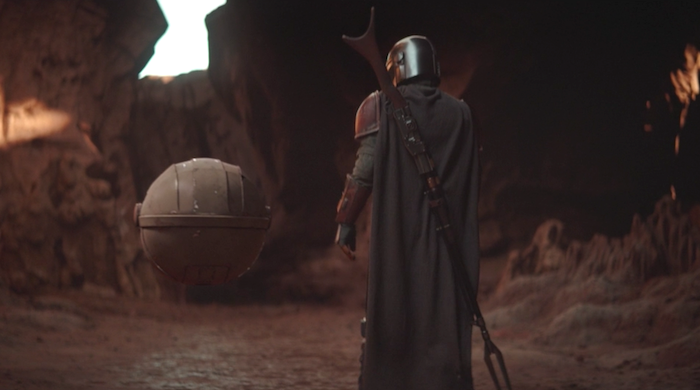 'The Child' Confirms That Thing We Already Guessed On The Mandalorian'

If the first episode of Disney+’s tentpole series The Mandalorian was its mission statement, then episode two — “The Child” — offers a glimpse at what may be its bread and butter: the budding relationship between our hero and his bounty. This compact chapter ran a tight 30 minutes and consisted of little more than The Mandalorian trying to overcome the obstacles preventing him from getting off that planet and collecting his reward. In the grand scheme of things, it’s nothing more than a slight diversion, really. Yet it also allowed the series a bit of breathing room, and a chance to better know our heroes by witnessing them in action.

The plot was laughably straight forward: The Mandalorian arrives back at his space ship with his unnamed bounty — whom I’ll refer to as “Baby Yoda” for obvious reasons — in tow, only to find a bunch of Jawas ransacking it for parts. He gives chase, attempting to infiltrate their sandcrawler while it’s on the move, but they zap him and he falls off. With no way to get his ship off the ground and nowhere else to turn, he drops in on his pal Kuiil (Nick Nolte) for help. Kuiil agrees to help mediate a deal between The Mandalorian and the Jawas, but what they want in return for all the stolen parts is something called “The Egg.” In order to retrieve the item, The Mandalorian enters the den of a mysterious beast, and it becomes immediately apparent why the Jawas don’t go after this egg themselves. The beast is big, and mean, and almost gets the better of The Mandalorian…

Until Baby Yoda uses the Force to halt the creature and lift it off the ground, giving The Mandalorian the chance he needs to kill it — and then the baby takes a nice long nap, exhausted from its efforts.

In the end, the Jawas get their precious beast egg, which they eat, and The Mandalorian gets his missing parts back, which he uses to repair his ship with the help of Kuiil. Baby Yoda sleeps through the entire repair montage, only waking up again when the ship takes off and enters space once more.

And thus The Mandalorian is back on track, heading to turn in his bounty and collect his reward — only now he’s beginning to suspect why the price on this little bundle of green was so high in the first place. Though the big reveal of the episode was barely a reveal at all (I would have been more surprised if Baby Yoda somehow couldn’t use the Force), that was entirely beside the point. What mattered was seeing what both characters did with this information. There was an interesting moment right after the initial Jawa chase, when The Mandalorian is repairing his gear and patching himself up. Baby Yoda watches him work, and eventually comes over with its hand outstretched to help — only for The Mandalorian to pick it up and tuck it right back into the pod. That’s our first inkling that Baby Yoda not only can use the Force, but also isn’t as much of a baby as it appears. At 50 years old, it’s still tiny but it has some reasoning and some practice with its powers, which it then goes on to demonstrate during the beast fight. We still don’t know just how aware Baby Yoda is of its circumstances, and of why it’s in The Mandalorian’s care, but for now it clearly wants to help.

Of course, the Mandalorian is blatantly uncomfortable with children AND with getting close to his bounties, so he’s still trying to maintain his distance. Which brings me to another thing this episode helps to cement: You really can seem to read The Mandalorian’s emotions, despite the mask. Rick Famuyiwa, who directed this installment, did a wonderful job finding those moments where the character’s physicality can speak volumes, from his slapstick struggle to scale the sandcrawler to the way he slowly turned his head toward the child as the beast floated in front of him. Without reading The Mandalorian’s expression at all, you know exactly what that look meant: A dawning realization of the powers at play, and the real weight of his mission. The only question I have is how long it’ll take The Mandalorian to cave under THE ENORMITY OF THE CUTENESS and swear his allegiance to this tiny master, because I’ve only seen this thing in action for 30 minutes and I’m ready to offer it my battery-powered lightsaber. I mean, LOOK AT IT:

Jesus, just eat me like one of your space frogs, Baby Yoda, because I’m done.

← Review: Ian McKellen and Helen Mirren Act Their Asses Off in 'The Good Liar' | Why 'Beauty and the Beast,' now on Disney+, Is Unintentionally Terrifying →