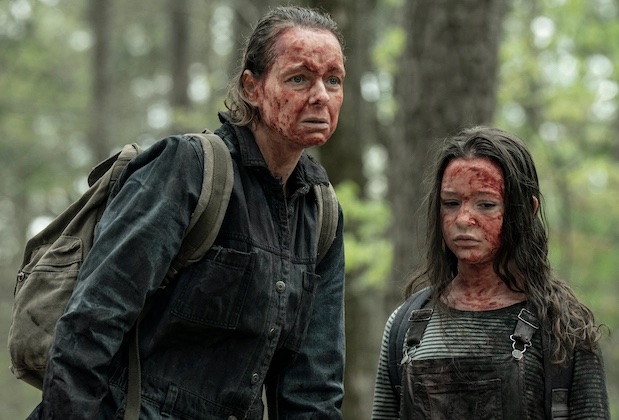 'Tales of the Walking Dead' Gives Us the Alpha Origins Story

Though she doesn’t quite match the villain level of Negan in his heyday, The Walking Dead’s Alpha is probably the second most sinister villain in the show’s history. She led the Whisperers cult, which wore zombie masks over their faces, walked among the dead, and often sicced hordes of zombies onto communities. When the Alexandrians crossed over into Whisperer territory, they were quick to put a lot of their heads on spikes. I’d wager that The Whisperers were also more responsible for the death of TWD cast members than any other villain, too.

Two-time Oscar nominee Samantha Morton crushed in the role. Unfortunately, there was no redemption arc available to her, because Negan had to kill her in order to complete his redemption arc. With Tales of The Walking Dead, however, the universe found a way to bring her back for another episode and flesh out her origin story.

As it turns out, Alpha - formerly known as Dee — was always at odds with her daughter, Lydia (in TWD, Lydia turned on The Whisperers and joined the Alexandrians). Dee takes us back to the earlier days of the pandemic — probably three or four years after the outbreak. Dee and Lydia have found refuge on a riverboat, which continues to operate as a small civilized society that holds dinner parties and somehow receives supplies from land every few weeks.

Lydia has made friends with Brooke, a socialite type who seems to be running the riverboat community. She likes to dress nice, and she encourages Lydia to do so, as well, much to Dee’s consternation. Meanwhile, the bartender — who has only been on the boat for a few weeks — dresses down Dee for not caring enough about her appearance and taking advantage of the spoils of the boat without contributing much.

When members of the community start to disappear, it does not come as much of a shock that the bartender is behind it. Only Dee is suspicious until the bartender signals to his friends on land and attempts to take over the riverboat. This might be a good time for Dee — hidden below deck — to be the hero and save everyone. That’s not who Dee is, though. She uses the opportunity to jump into the paddleboat with her daughter and leaves everyone else to essentially kill each other off.

Once she makes it to land, Alpha does slice up Brooke’s face as a sort of calling card. She also tries to teach Lydia how to handle zombies. Lydia has little interest in learning. When Lydia runs away, Dee makes chase, and she finds Lydia in a ditch. Dee reasons that Lydia is not cut out for this world and decides to kill her own daughter to spare her from the horrors of it. Before she does, she’s surrounded by a group of Whisperers led by Hera. Hera pulls off her zombie mask, reveals her blonde hair, and says to Dee, “Don’t speak. Whisper,” before knocking Dee out.

A post-script to the episode, however, reveals that Dee — now Alpha — wears Hera’s face as her mask. And that is how Alpha is “born.” Meh.