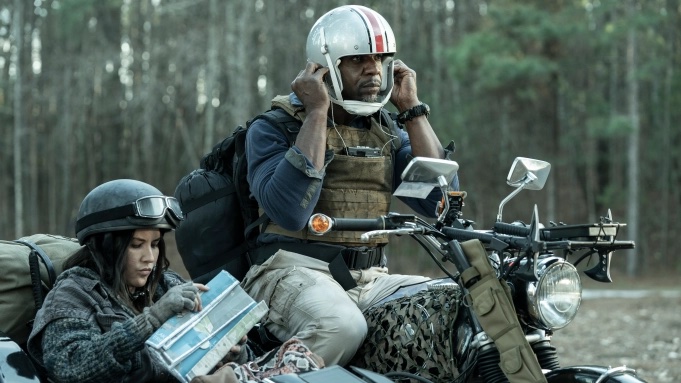 'Tales of The Walking Dead' Is, Uh, Different

“Evie; Joe” is set a few years after the world has been overrun with zombies. Terry Crews stars as a doomsday prepper who lives in a bunker and was fully prepared for the zombie apocalypse. He is content enough to pass the days watching old football games with his dog, but after his aging pup is killed by zombies, Joe finds himself feeling lonely. He decides to leave his bunker behind, jump on his motorcycle (with sidecar), and find another doomsday prepper with whom he connected online before the Internet collapsed.

En route, he meets Evi (Olivia Munn), a free-spirited, vegetarian hippie type, who catches Joe in a net while he was taking a breather on her property. She handcuffs and abducts Joe — who doesn’t put up much of a fight — and they continue on their road trip. Their destinations are only miles apart from one another; while Joe wants to find love with the other doomsday prepper, Evie wants to reconnect with her estranged husband, who left her not long before the apocalypse.

Munn and Crews have decent chemistry, and it doesn’t take a genius to figure out where the story is headed. What is unexpected, at least for The Walking Dead universe, is the lighter tone, the occasional moments of levity, and a romantic connection that develops over 20 minutes instead of three seasons. It’s a slight, self-contained story, and it isn’t exactly great television, but it’s a modestly entertaining 45-minutes that requires no previous knowledge of The Walking Dead, which is also refreshing. Viewers don’t have to wait three seasons for the payoff; there’s no need to watch three different shows to find clues to the whereabouts of one character. It’s just a simple, sweet story with a few zombies and a couple of new faces in the same old world. The stakes are low and it doesn’t require a lot of investment, which is exactly why it’s worth continuing to watch. That, and the fact that the next episode stars Jillian Bell and Parker Posey.

Tales of The Walking Dead airs Sundays on AMC/AMC+