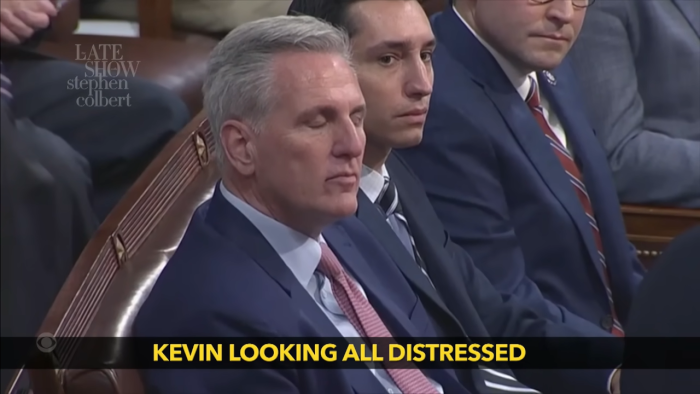 Watching Kevin McCarthy’s failed bids at becoming Speaker of the House has been very entertaining. That entertainment comes with incredible embarrassment, but that’s better than shame! Right? Until we discover the repercussions of the Republican party failing this spectacularly, we can sit back and laugh. Who better to help us do that than Stephen Colbert?

The Colbert Crew kicked off their last show of the week with yet another song parody. I’ve made it clear how much I love these and this time was no different. Set to the tune of “Our House” by Madness, the parody mocked the (R) House and their attempts at finding a Speaker. They roast McCarthy, while also taking shots at the far-right lunatics his party has been leaning on for the better part of a decade.

The GOP falling apart like this is as cliche as it gets. Read any superhero comic where the villains team up. Their undoing always involves them turning against each other. You’d think they would realize that some personalities just don’t go well together. However, then you’d have to assume they think about anyone other than themselves.