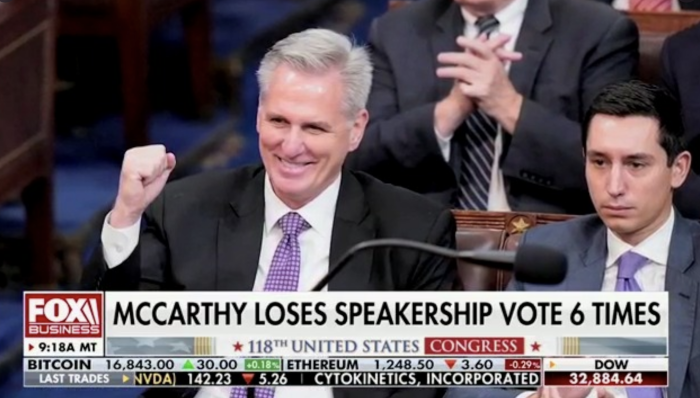 The Hour of Kevin McCarthy's Humiliation Is Upon Us

It’s that time of day again this week, the hour of Kevin McCarthy’s ritual humiliation. After being denied Speaker of the House six times over the last two days, voting on the 7th ballot is expected to be taken up shortly. Will this time be different? That’s unclear, although Kevin McCarthy has made so many concessions now that he’s given away all his power.

The other concession is that McCarthy has agreed not to use his SuperPac to bankroll candidates in open seats. Basically, the nutcases are demanding that McCarthy not put his finger on the scale in favor of “mainstream” Republicans because the nutcases want to make sure their racist, election-denying conspiracy theorists have an equal opportunity to win the nomination. For Democrats, that’s great news. Do you remember how many harebrained Republicans the Democrats helped to win their party’s nomination actually won in the midterms? Zero. More frog-jumping lunatic candidates, please! Because even if they somehow do win, it means the GOP has to put up with another disruptive, attention-seeking Matt Gaetz or Lauren Boebert among their ranks.

I did hear a Republican Congressman suggest a nuclear option, which would be interesting to see. If McCarthy continues to fall short, there’s a possibility they might change the rules so that a Speaker can be elected based on the plurality of votes. In other words, whoever had the most votes would win. That would force the 20 rebels to choose between Hakeem Jeffries or Kevin McCarthy. Do they hate McCarthy enough to trash their political careers and sink the GOP to spite Kevin McCarthy? God, I hope so. I could almost guarantee that Matt Gaetz would still vote against McCarthy.

It’s worth noting, too, that Trump reached out to the 20 holdouts — many of whom Trump basically created in his own image — and asked them to vote for McCarthy. In a testament to Trump’s weakening power, they all declined.

We’ll find out shortly if McCarthy’s concessions moved the needle. For Representative Bob Good of Virginia, it did not. He has already reiterated this morning that he will never vote for Kevin McCarthy.

Rep. Nancy Pelosi: "I'm saddened by all of this. You can just imagine what it would be like if a woman were holding up the opening of Congress, the swearing in of members, the enabling of staff to be hired to do the people's work. Can you just imagine for a person of color?"