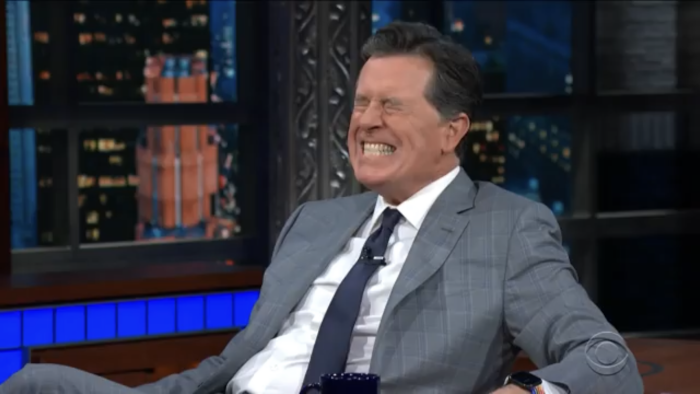 It happened! Stephen Colbert has been bested by a piece of Lord of the Rings trivia. He’s not just a collection of the books sewn together and wearing a suit as I assumed. The emperor has no clothes.

Colbert is notoriously a huge Lord of the Rings fan. I’d even go so far as to call him a nerd. Not the new way it’s used, where anyone with an occasional hobby is suddenly a “nerd.” He is a “that guy decided to read the Silmarillion for the third time instead of going to prom” NERD. I envy him for it. I love LOTR and I have nowhere close to his encyclopedic knowledge.

Others have tried to outwit Colbert before, including an actor who recently agreed to pay $2.2 million to his victims and also Ryan Gosling. This time, though, like the army of Saruman attacking Helm’s Deep, he was met with defeat. The best part is that that defeat was delivered by Merry and Pippin themselves! Billy Boyd and Dom Monaghan, promoting their new podcast, presented a question that Colbert could not answer.

Dom and Billy being not only friends in real life but clearly very much like their characters makes me super happy. They’re delightful. Also, their appearance did its job as I had forgotten they have a podcast but have since downloaded several episodes.

Watching Colbert’s legitimate frustration at not knowing the answer was delightful. At the end of the day, he’s still a super fan. He even made a cameo in one of The Hobbit films. Just because he couldn’t name the section of Fangorn Forrest where the Ents have their EntMoot does not strip him of his fandom. But, boy oh boy, does it sting!