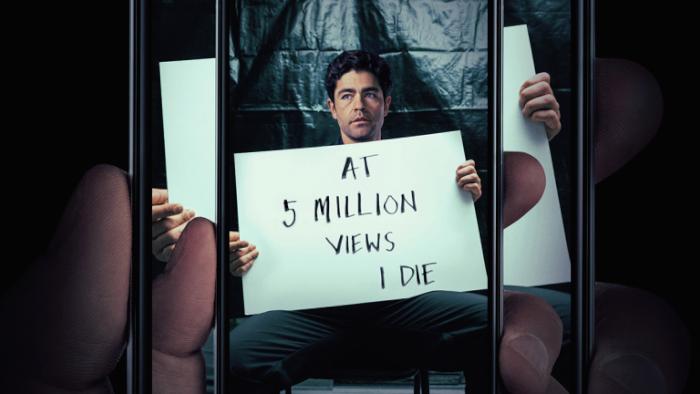 As someone who has watched too many episodes of Law & Order, Castle, and Psych, I understand the comforts of a good procedural. But I also appreciate their compact, efficient nature — there’s a crime, witnesses are questioned, leads are pursued. You start the episode with a murder, and 42 minutes later, the murder has been solved. It’s satisfying without being onerous.

The same cannot be said of Netflix’s Clickbait, a harebrained mystery masquerading as (thin) commentary on modern Internet culture, from catfishing to cancel culture. It’s never a good show, but it is initially intriguing, even if the conceit is stale. Nick Brewer (Adrian Grenier) is abducted one morning, and a video shows up online of him, beaten and bloodied in a dimly lit space, holding a sign that reads, “I abuse women.” If the video is viewed 5 million times, another posterboard reads, he will die.

Nick’s sister, Pia (Zoe Kazan, what are you doing?) sees the video, races to Nick’s wife, Sophie (Betty Gabriel), the police get involved, and the investigation unfolds from there. It’s interesting for about an episode and a half, mostly because we are wondering, simultaneously, if 5 million people are going to watch this video and doom him to death, but also, is he an abuser? Social media gets to decide if he’s going to be subject to the ultimate cancellation, and the only evidence they have to go on is a card he’s holding up under duress reading, “I abuse women.” It’s a decent indictment of Twitter mobs that ruin the lives of others based on a single moment in a person’s life that can sometimes be taken out of context or be based on misinformation.

Unfortunately, Nick’s body is found in the second episode, and the series slowly unravels from there, each episode less interesting than the last. After three or four episodes, you start calculating sunk costs and hoping against hope that the reveal will make suffering through the rest of the series worth the time and effort.

Briefly: After Nick’s body surfaces, the leads take Sophie, Pia, the police (and occasionally a journalist) through Nick’s online dating history to find someone who might have a motive to kill him. It turns out that, despite being married, Nick has a very active online dating life. We also learn that Nick’s wife had an affair, so in addition to investigating the wife’s lover, the police track down and question a number of women with whom Nick had online relationships and/or anyone related or associated with them that might have reason to murder Nick. This goes on for roughly the first seven episodes of the series. They chase leads, and those leads eventually lead to dead ends.

This is what happens in the finale, and I am gobsmacked by how idiotic it is. Nick’s assistant, Dawn, is a lonely old housewife whose husband neglects her in favor of a train set he’s been building in his garage. One night, tipsy on too much wine, Dawn decides to create an online dating profile using a picture and identifying information of her boss, Nick. The persona she creates for Nick is popular, so popular that Dawn creates more profiles, and begins online dating more women. All this catfishing makes her feel alive, and soon she uses that energy to seduce her husband. Afterward, however, her husband stumbles into Dawn’s office and discovers her dark secret.

Nick, who knows that Dawn is the only person with access to all of his passwords, also realizes her secret. When he goes to confront Dawn about it, Dawn’s husband accidentally murders him. So begins the cover-up that will unfurl across the seven earlier episodes, culminating when Nick’s young son, Kai (Jaylin Fletcher), also figures out that Dawn is behind Nick’s fake dating profiles. When he foolishly goes to Dawn’s house to confront her, Dawn and her husband abduct him and nearly murder him to keep their secret covered. The police arrive in time to save him. The husband pulls a suicide-by-cop and the series mercifully ends.

That’s it. That’s a wrap. Nick wasn’t an abuser. His death was pointless. We all learned nothing. I hope anyone who is reading this did so to avoid suffering through those final four episodes.

← 'Afterlife of the Party' Is Yet Another Bland Product of the Netflix Algorithm | 'Ted Lasso' Episode 7 Recap: He's Here, He's There, He's Everywhere →