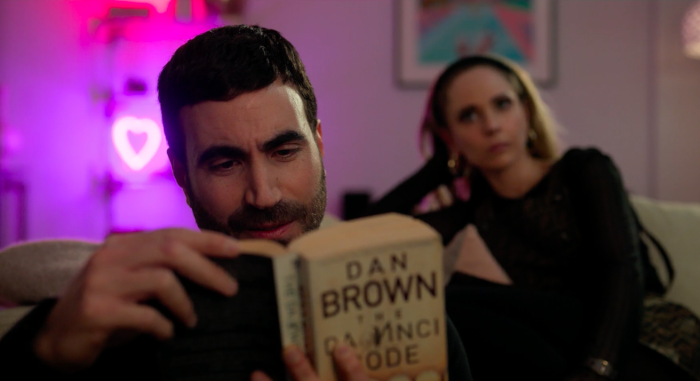 It’s one thing to have a live-in partner, but having the same place of work adds a whole other level to it. You wake up with them. Have breakfast with them. Carpool with them. Reverse that process at the end of the workday. After a while, it would get to be a lot. So when Keeley parts ways with Roy to treat herself to a quiet cup of tea, only for him to decide to come along with her (“Can I come?” oh my God, Roy, you beautiful, hairy angel), it’s clear that there’s trouble brewing between them, even if it’s one-sided at that moment.

Meanwhile, Nate has fallen all the way down the self-absorbed rabbit hole. Seeing him beaming down at his phone screen with a loving look is unsettling because as we all know, seeking validation from strangers on the internet can only lead to heartbreak. When he sees his face in the newspaper under a flattering headline, it’s probably the happiest he’s been since he was first promoted to assistant coach. His stern father then brings his joy to a screeching halt, and now we’re starting to get a good idea of where Nate’s incessant need for external validation stems from.

Our dear Ted Lasso, looking much more spritely than when we last saw him, finally makes his long-awaited appearance in Dr. Fieldstone’s office. But any hope for him rapidly coming to terms with his situation is quickly dashed when he thanks her for helping with “that little hiccup from the other night,” (yikes) and insists that therapy won’t be necessary (double yikes). The Doc is having none of it and tells him to have a seat. She patiently watches him stall, and when his unease finally makes itself obvious, she leans forward and tells him, “Ted. Don’t worry.” Actor Sarah Niles is simultaneously lovely and moving in that moment because although it’s delivered with every ounce of professionalism demanded in that field, there’s a hint of genuine concern in her eyes and furrowed brow. Unfortunately, just as it seems she’s on the verge of making headway with him, her opening question regarding his panic attack sends him fleeing.

Out on the pitch, half of the team is sent off with Roy and Ted while the other half prepares to train with Beard and Nate. Some good-natured ribbing is kicked off by Dani Rojas, followed by Jamie, both of which are taken in stride by Nate. But when Colin follows suit (except his joke is the most innocuous of the three), Nate responds to him negatively, which can be shrugged off as a simple hard-ass moment, until he tells Colin to sit out training. It’s rough to watch the hurt and confusion on Colin’s face; he’s easy pickings and Nate knows it, so watching someone like that get wounded is tough to watch (I also wasn’t down for Beard’s dismissal of him either).

Back in the locker room, Sam is looking at his two-day-old unanswered Bantr message asking for a meetup. As his teammates commiserate with him—Jamie perched on his shoulder is the height of adorableness, despite his later joke about an earlier message in which Sam confides that his favorite film is Ratatouille—the three dots indicating that the other person is typing a message appear, only to vanish once more, much to everyone’s disappointment. We pivot to Rebecca’s office and find her on the couch, stress eating her morning biscuits as she deletes her drafted message. Although Keeley has been urging her to respond, she’s spent the entire time fretting over what to say. As usual, it’s up to Leslie to deliver the truth bomb:

“How about the truth? ‘I’d love to meet up, but I’m worried you can’t live up to the fantasy I’ve created in my head, so I’m going to let my insecurities keep me from possibly finding my one true love.’”

The man has a point, though. Beneath Rebecca’s jaded façade, it’s obvious that she’s afraid of being hurt. “All relationships are a nightmare,” she says, excluding her present company with their seemingly perfect relationships. Of course, this provides the perfect moment for Keeley to confide that things aren’t all they’re cracked up to be, as their constant time together makes Roy feel like her “shadow.” As if right on cue, Commander Fur Chest himself walks in, and in a ridiculous attempt to change the topic of conversation as quickly as possible, Leslie and Rebecca begin desperately scat singing. Later, as Keeley tries to get some work done at home, Roy distracts her, which is entirely understandable as I would never get a single thing done if that man was roaming my house like a besotted panther.

Ted returns to Dr. Fieldstone’s office, much to her surprise. When she says as much, he responds, “Yeah, well, I don’t quit things.” Much like his insistence that everything is fine, this claim feels like another attempt for him to lie to himself; though he may be determined when it comes to winning hearts and minds, he’s buried his hurts so far below the surface that he’s petrified of getting anywhere near that layer. Ted deftly wields congeniality as a protective measure, but since that’s been an utter failure with the Doc, who’s long seen it for the charade that it is, he’s now compelled to arm himself with outright hostility. It’s a new side of Ted we’ve yet to really see, Led Tasso aside. He’s made his disdain for therapeutic practices clear, though it’s almost certain that his hostility stems from more than just his recent divorce. Whatever it is, it is almost surely devastating. At that moment, however, Mr. “I Don’t Quit Things” quickly storms out the office, slamming the door behind him, clocking even less time in the chair than the previous attempt. A third try goes far better, which owes much to Dr. Fieldstone’s frankness about her taking offense at his tirade against her profession. Even though Ted has shown he can lash out when frightened, there’s still a good person in there, and the knowledge that one’s actions hurt another person can be enough to bring them back to themselves. It’s refreshing to watch him drop the act and be the Ted we all know and love, even as he acknowledges that he may not be ready for the truth of himself just yet.

As far as our favorite couple goes, over at the boot room, an impromptu meeting occurrs with what feels like roughly half of AFC Richmond in attendance as Keeley stresses about her issue with Roy. Rebecca tells her to be honest and communicate her feelings, while Ted counters her by saying, “sometimes it’s good to bottle things up” (I love you, Ted, but shush). Keeley takes umbrage when critiques start getting lobbed in Roy’s direction. But later on that evening, as she tries to watch Sex and the City, Roy plops down in front of the tv with The Da Vinci Code, oohing and aahing all the while. As Carrie Bradshaw reaches the end of her rope, so, too, does Keeley. Her bottled feelings can no longer be contained, and she unleashes on him. Poor Roy. He is SO bewildered and caught off guard, which is exactly why holding back your feelings is a terrible idea (Ted). Roy understandably avoids her the next day. Out on the pitch, he’s more cranky than usual and when he tears into Jamie, it’s clear his coaching has little to do with football (“He’s your teammate! He needs you to come to the ball and support him!”). Only when Jamie responds that the best thing to do at that moment was to give his teammate space does Roy come to the difficult realization that he shoulders some of the blame for Keeley’s blow up. When she returns home that evening, partially convinced that her relationship is doomed, she discovers the bathroom covered in rose petals and soft candlelight. It’s a spectacular apology, followed up by him promising to give her the space she needs, and leaving her in the bath while the dulcet sound of Sade’s “By Your Side” plays on.

Despite that bit of loveliness, the good feelings are in short supply this episode. Nate Shelley. Oof. All credit to the writing staff (fun fact: this week’s episode was written by Phoebe Walsh, who also plays Jane, Beard’s toxic girlfriend) for building this turn so organically that it’s not so much a surprise as it is a raging disappointment. Despite Nate’s gradual evolution into a jerk, there’s no way to truly prepare for how appalling his actions are. When Colin enters his office to do the adult thing and ask him what’s wrong, Nate dresses him down so venomously that it’s hard to imagine this being the same man so many of us loved in season one. Yes, there is that legendary put-down scene, but delivery goes a long way. There’s a difference between using your keen powers of observation for the greater good or to cut other people down. Sith Nate here is clearly now using his powers for evil. Coach Beard catches the entire exchange and knows that this needs to come to an end. When he confronts Nate, he acknowledges his wrongdoing, but there’s something about how his first question is, “Did you tell Ted?” that’s a bit of a red flag. Still, when Nate gives a speech in front of the whole team in order to make amends for the way he treated Colin, it comes as a relief. When the team comes in for a big group hug, it feels like a heartwarming conclusion to what was a sad plotline. Thank goodness we have that behind us.

PSYCH. You better look somewhere else for heartwarming, because we’re fresh out here. The “Wonder Kid” jersey is such a sweet and well-meaning gift that Nate’s fury over it comes as an absolute gut punch. Of course, he’s not actually mad about the jersey. It’s a convenient target, much like how Will is, now that Nate’s been chastised by Coach Beard and the other players who once again demonstrated unity among them (all of whom fully aware of what happened to Colin). Kitman Will, sadly, doesn’t have teammates to reach out to, a fact he seems to be quite aware of in that final shot.

I’d argue this is the darkest episode of Ted Lasso thus far. It’s almost impossible to say which way Nate’s story is going to go, though I suspect we’ve only just fallen into the abyss. With all the online chatter about the show’s seemingly relentless cheer, it will be interesting to see how a bleaker Ted Lasso will be received. There’s plenty more episodes to go, which is good seeing as how there’s still plenty of storylines hanging in the air. Obviously, Rebecca and Sam still need to learn about one another’s identities, and even though the theme is leaning darker, I need that storyline to resolve amicably, because I can’t bear to live in a world where I must choose between those two marshmallows. Of course, we still have the central sports drama of AFC Richmond trying to get back into the Premier League. Things are starting to get real now, so strap in, folks, and if you need a palate cleanser, you can always hit ‘play’ on that Christmas episode again.

Dr. Fieldstone: “The truth will set you free, but first it will piss you off.”

Kaleena Rivera is the TV Editor for Pajiba. When she isn’t wondering if that wasn’t a look of vague familiarity on Rebecca’s face when Sam delivered that line about phones bringing us further apart, she can be found on Twitter here.