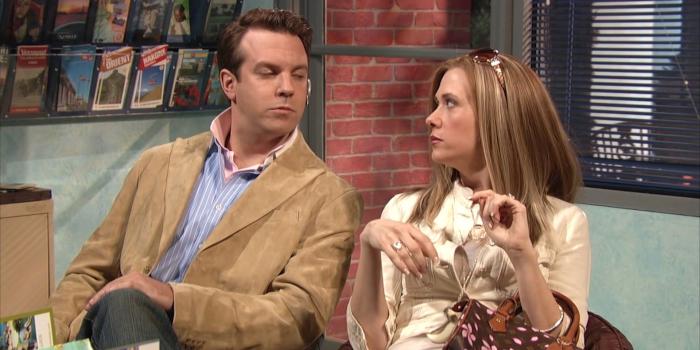 I suppose it was inevitable, but SNL has dipped into the reality/influencer well and will feature Kim Kardashian West as this season’s second guest host on October 9th along with musical guest Halsey. I’m honestly surprised it hasn’t already happened, and I hope it does not portend a future hosting stint from JoJo Siwa (no offense to Ms. Siwa) or Charli D’Amelio (all offense intended). I’m sure that she offers the show a lot of ripe opportunities, and if she’s game for self-deprecation, it will probably be a coup for both her brand and the show.

Meanwhile, Owen Wilson — whose career is soaring again after Loki — will host the October 2nd season premiere with musical guest Kacey Musgraves. Wilson will be promoting the new Wes Anderson, The French Dispatch, and it will be his first hosting stint, as well. Rami Malek will host the season’s third show — ahead of No Time to Die on October 16th — with musical guest Young Thug.

The big news, however, is that former cast member Jason Sudeikis will host the fourth episode of the season. It’ll be the first guest-hosting stint for the Ted Lasso star, as well, and the best news about this to my mind is that I hear that Kenan Thompson will be returning, and you know what that means?

Sudeikis is also the one true Biden. The musical guest for the Sudeikis hosted show will be Brandi Carlisle.

There has been no word yet on whether long-running cast members Pete Davidson, Cecily Strong, Kate McKinnon, or Aidy Bryant will return this season, although I would expect that any day now. Kenan Thompson said on the Red Carpet at the Emmys that he will be returning for the 19th season, although he’ll still be shooting the second season of his sitcom, Kenan along with fellow SNL cast member, Chris Redd.


← Tom Brady Wants the NFL To Pay Him in Crypto... OK | Cary Fukunaga Had Issues with Nic Pizzolatto on 'True Detective' →