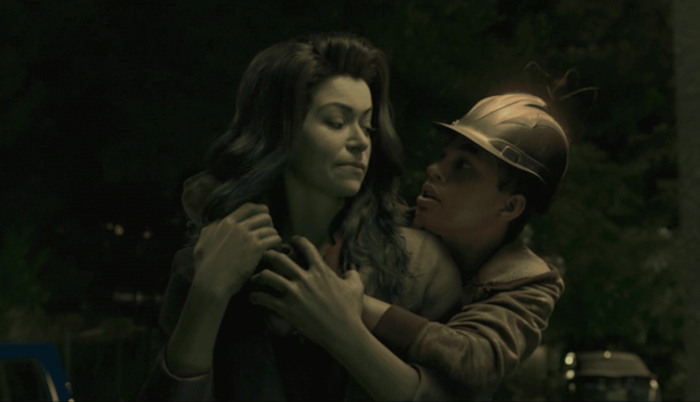 'She-Hulk' Episode 3: Just Remember Whose Show This *Actually* Is

Before I get to the TWERK HEARD ‘ROUND THE WORLD, let me address my actual biggest takeaway from this week’s episode: I’m 100% on board with Jennifer breaking the fourth wall constantly. Episode three dials up the meta in several instances where Jennifer not only talks directly to the audience but also acknowledges that she’s in a TV show and I’m sorry, it just works for me. Not only is it accurate to the comics (She-Hulk was one of, if not THE, first Marvel characters to break the fourth wall — sorry Deadpool) but it’s exactly the sort of self-awareness that the MCU ought to be able to dabble in. In last week’s recap I mentioned that “She-Hulk may prove to be our greatest insight into, if not the world of the MCU, then the wider world that the MCU inhabits” and while I still stand by that, I’ll admit that I wasn’t imaging the “wider world the MCU inhabits” would be our own. The show is able to fill in gaps in Marvel’s world-building while also acknowledging the artificiality of that world-building and the MCU’s predominant place in pop culture. It’s not unlike Harley Quinn in the way it can deflate the oh-so-serious nature of the franchise, except that what happens in She-Hulk is very much canon.

It’s also at least a little bit meta in the way it predicted the “fan” response to the show, as Jennifer’s on-screen entry into the public eye was met with exactly the sort of online commentary around “superhero diversity” that, well, the entire Phase 4 has received. I continue to think the show is concerned less with appealing to women viewers and more with thumbing its nose at angry fan bros who, it appears, do not realize that they are the joke. And again, I’m 100% on board with that! Let’s alienate some sad gatekeeping creeps!

Speaking of creeps, She-Hulk just low-key introduced The Wrecking Crew, Marvel’s premiere… uh… construction-themed villains! The great thing about having a genuine comedy in its roster is that Marvel doesn’t have to spend a lot of time making “goons who got their powers from a mystical crowbar” seem DRAMATIC and IMPORTANT. Anyway, these guys were hired by a mysterious boss to get a sample of Jennifer’s blood (which they failed to do because her skin is thick y’all), so now we’re left speculating about that boss’s identity. Wilson Fisk, a.k.a. Kingpin, would make a lot of thematic sense, though it’s not as if the MCU is lacking for villains. Julia Louis-Dreyfus is overdue for a return as Valentina Allegra de Fontaine, who could easily be looking for Hulk blood to make her own Hulk. Sharon Carter is still out there, as are any number of Loki variants probably and some version of Kang too, probably. Heck, we still don’t know what Titania’s whole deal is!

This week’s main plot is the parole hearing of Emil Blonsky, which hinges on the testimony of Supreme Sorcerer Wong (guest star alert!). Wong needs to corroborate that Emil didn’t break out of prison of his own volition, though he did return to it by choice — despite the fact that Wong offered him his freedom. Jennifer ends up winning the case for her client, though Emil’s pastoral life with his seven soulmates is contingent on him wearing an inhibitor and agreeing not to transform into the Abomination, and Wong has to beat a hasty retreat when the parole board points out that he himself broke the law in assisting a jailbreak. It’s another example of the show highlighting the real-world consequences of superhuman/mystical activity that’s played for breezy laughs.

Meanwhile, Jennifer herself agrees to take the witness stand in defense of her former coworker, Dennis. He’s suing a shape-changing elf (with diplomatic immunity via Asgard) that dated him while pretending to be Megan Thee Stallion and got him to spend $175k on her. His lawyer, Jen’s colleague Pug (Josh Segarra), is in a tricky position, because while the elf really did defraud Dennis, she claims it was consensual because nobody in their right mind would really believe they were dating Megan Thee Stallion. Except Dennis actually is just that deluded, and luckily Jennifer has years of anecdotal evidence to corroborate it! With her help Dennis wins his case, and Jennifer herself gets the real Megan Thee Stallion as a client — which we see in the post-credit scene with, yes, the twerking. Die mad about it, jerks. If you think there is a woman on this planet who wouldn’t dance with Megan Thee Stallion and then immediately offer to commit murder for her if given the opportunity, then you don’t know nearly as much as you think you do. Steve Rogers wishes he could move America’s Ass like that.

Episode three feels like She-Hulk finding its solid ground as a show. In a half-hour, the show brought together the worlds of The Incredible Hulk and Doctor Strange, demonstrated the repercussions of New Asgard’s residency on Earth, and even introduced a celebrity fan. The potential of Marvel having both a legal show AND a comedy in its pocket is playing out in obvious and fun ways, and we’re already seeing it fill in the gaps between MCU tentpoles. We even got a look at the lovely Renée Elise Goldsberry as Mallory Book, another lawyer with GLK&H and Jennifer’s (likely) rival! For all that She-Hulk seems divisive online, I’m seeing more people in real life actually enjoy the show as compared to the other Marvel series — perhaps because it doesn’t feel like homework. Which means, of course, that there’ll be a big dumb CGI punch-em-up in the finale probably.