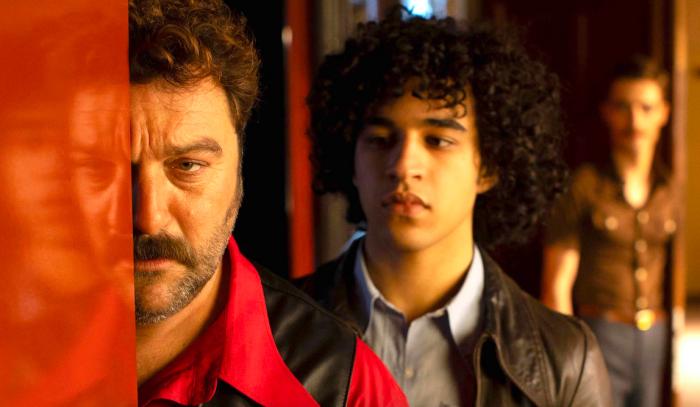 French director François Ozon, perhaps like all great homosexuals of our age, knows from his Fassbinder. One of Ozon’s earliest directorial efforts, Water Drops on Burning Rocks from the year 2000, was an adaptation of a play written the New German raconteur. And here twenty-two years and about twenty films on Ozon’s back at it, only this time with a far more established and beloved property of ol’ Rainer Werner’s. This weekend he gifts us with Peter Von Kant, a charmingly melodramatic adaptation of The Bitter Tears of Petra Von Kant that flips the genders of the main characters, turning “Petra” the female fashion designer into “Peter” the male film director, while styling the great Denis Ménochet to look exactly like Rainer himself, right down to the white suit, the leather vest, the leopard prints. And this sort of mirrored meta-commentary take fits the property just fine, if you ask me.

See, before the enfant-terrible auteur had filmed his critically-acclaimed cult classic of Petra in 1972, Fassbinder had written it as a play, and before Fassbinder had written it as a play he had personally lived it. Or a variation of it anyway, as its lead character—a hard-drinking and self-destructive creative who throws herself with foolish abandon into a doomed love affair with a female model—is perhaps the most clear stand-in for the director in his entire hard-drinking and self-destructive career. Even more than the lead character that Fassbinder himself would play two years later in Fox and His Friends it’s Petra, in all her nasty, depressive self-obsession, that has always felt the truest to the idea of what Fassbinder seemed to be gunning for. She’s the most sterling distillation of our love-hate relationship with love and hate relationships. At our most pathetic our purest form. “The way men stink.”

Perhaps Rainer needed that inch of distance afforded by the gender-swap, from real life to his art, to plumb his most awful depths with such precision? Or perhaps he still wasn’t quite prepared to put an explicitly male homosexual relationship front and center in his story, something he wouldn’t do until the aforementioned Fox and His Friends two years after. Whatever the case the film’s been read by Fassbinder nerds for the past five decades as a thinly-veiled look at the director’s relationship with actor Günther Kaufmann, who’d acted in several of his films before they broke up in 1971, mere moments before Petra got pounded out. And so something just feels right and easy here, like a smooth snapping back into place, with Ozon turning the lesbian anti-love story back into a gay one for this updated go-round. Like we’d been waiting to see it this way.

Not that Ozon plays this gaying-up exactly, uhh, straight. In Peter Von Kant the lover that storms into Peter’s life to sweetly ruin everything is named “Amir Ben Salem” (played by newcomer Khalil Ben Gharbia), a pretty plain reference to an entirely other one of Fassbinder’s well-known real-world paramours—specifically the actor El Hedi ben Salem, who’d starred in Fassbinder’s masterpiece Ali: Fear Eats the Soul. (The director’s greatest, simplest masterpiece, if you ask me).

And listen, if any of these queer art-house movie-nerd references mean anything to you, if they haven’t utterly exhausted you already just through my recounting a simple few of their exhaustive in-joke clap-backs, then maybe Peter Von Kant will similarly entertain your ass. Me being a lifelong Fassbinder nerd means this movie is very much made for me and mine! And that’s great and okay! It’s just that seeing the forest for the trees gets a little murky from where I’m standing on this one since I’m over here giggling about things that might slip past people who haven’t spent half their lives scouring every Fassbinder resource for crumbs.

So does the new film work on its own as an adaptation of a play once written about real emotions—about pain and exacting brittleness, about a difficult character’s metaphorical slide onto the floor dragging an entire expensive table-arrangement along with them into a luxurious slow-motion crash of utterly human disaster? Without all the cineaste Easter Eggs, I mean? And does that even matter, since the joy of those little nudges and nods toward Rainer Things were clearly a big part of why Ozon made this movie in the first place?

I will say that Ozon plays the material much lighter than Fassbinder did—ever the Frenchman he can’t help but inject some farce into it. Not that Rainer’s film is a slog—anything but! But Rainer’s humor is far drier and crueler—the sight-gag of Petra designing herself a dress so constrictive she can only take the teensiest of steps around her apartment is symbolically rich but also very very funny to watch, after all. The laugh is baked right there into the excruciating slowness of her elaborate, determined masochism.

Meanwhile, there is nothing slow or teensy about Peter. Ménochet prissily galumphs around his chic apartment, a bull smashing up his own china shop day after day, mannequins and love-seats be damned. His love comes on as sudden and swiftly as his fury; his lusts as immediate as a first look. And unlike Petra, who seemed so frail and anesthetized she might fall over lifting up her phone receiver, Peter can be very scary—Ménochet is a mountain, and his outbursts (fueled here as with Fassbinder’s own by mountains of cocaine) are volcanic.

Indeed everything is bigger about Ozon’s take on the material, from Peter’s apartment with its city-view to the voluptuous bear-rug that a bare-assed Ménochet swaddles himself in post-coital. And no, unlike what Michael Bay might have you believe, bigger doesn’t necessarily make better, not by any means. Peter Von Kant never really stops feeling like a bit of a lark; as if Ozon was just playing around mid-pandemic with ideas he’s had flitting around in the back of his head for decades. He just happens to have the resources to get living legends like Isabelle Adjani and original Petra star Hanna Schygulla to show up for his larks, and the world’s better off for that!

But lark aside Peter Von Kant did make me see this material in a fresh, airy and adaptable way that I hadn’t viewed it previously, with a repertory fashion that can be retrofitted a la Shakespeare. And all while still toying around with the same concepts of our impossibly contradictory impulses as far as human romance goes. I’ve never seen it on the stage as it originated, and Ozon’s film brings that spark to it.

And relative to that idea Peter Von Kant gives us one pure gift for the ages in its update of the story’s assistant character, the third leg in the film’s triangle astride Peter/Petra and his/her paramour. In Fassbinder’s film there was “Marlene” played by the great Irm Hermann, and she was grand. But Ozon gives us Karl, exquisite Karl, played to stealth twink perfection by actor Stefan Crepon—and I dare to say he might be even grander? The film’s not-so-secret weapon, Ozon cuts to Karl, silent as the grave with mustache enough for five men, whenever the film needs a goose, and Crepon delivers the geese like gangbusters. He’s a riot plain and simple, a new queer icon for the ages from where I stand. And if I don’t see one million of him silkily sauntering around this Halloween then we’ll have failed every generation of gay men who came before us to sneer and spit in bug-eyed, turtlenecked, sadomasochistic tendencies.