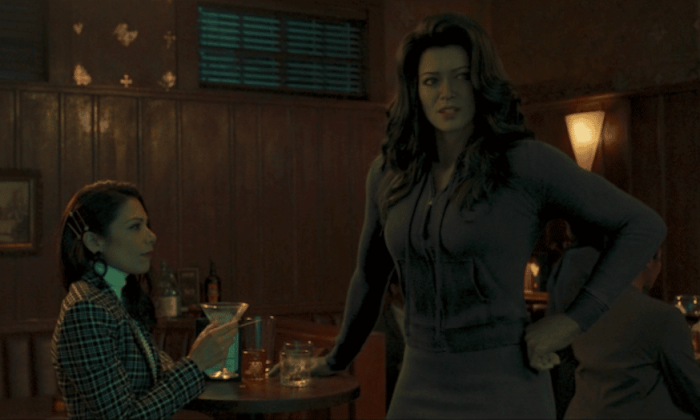 'She-Hulk' Episode 2: The Client Is An Abomination

On this week’s She-Hulk: Attorney At Law, Jennifer Walters loses her job, then gets offered a new one — provided she’ll agree to defend her cousin’s old adversary, Emil Blonsky. So yeah, looks like this really IS a law show! More than that, though, She-Hulk may prove to be our greatest insight into, if not the world of the MCU, then the wider world that the MCU inhabits. One of the most frequent complaints I’ve heard about the MCU recently is that it hasn’t done much to explore the ramifications of “The Blip” — that 5-year period when half the world population turned to dust, and then miraculously reappeared (Thanks, Avengers!). With the exception of The Falcon And The Winter Soldier, which introduced the Blip-inspired terrorist cell called The Flag Smashers, all the other shows and movies have put in the least amount of effort to explain how their characters returned to their lives after the events of Endgame — if they mentioned the events at all. You could wave it off and claim that we’re in a whole different Phase now and it’s time to move on, I suppose, but I think ignoring the Blip is a symptom of a larger MCU problem: The franchise didn’t know how to establish the “real world” in normal times, either. In superhero stories, the world is either In Danger or Saved. What comes before and after rarely matters. Enter She-Hulk, which may not address The Blip but certainly explores the more long-standing MCU omission: What does the very existence of super-powered people mean to the world? And apparently, the answer is — MOAR LAWYERS.

After Jennifer revealed her new powers to save the jury from a rampaging superpowered social media influencer named Titania (Jameela Jamil) last week, the judge declared a mistrial — and because it was Jennifer’s fault that a sure-win case fell apart despite doing the right thing, she’s fired from her gig as Assistant DA. She’s also baffled to learn that she’s been dubbed “She-Hulk” in the media, as if her existence can only be justified as a derivative of her cousin. Her notoriety works against her in the job market, and no other firm is willing to bring her on board — until Holden Holliway (Steven Coulter) approaches her with an offer she can’t afford to refuse. You see, Holliway’s firm was representing the defendant in Jennifer’s case, and he realized he’d have lost against Jennifer if it weren’t for her Hulkish display in court. He’s impressed with her legal chops, sure — but that’s not really why he wants to hire her. To capitalize on the rise of superpowered individuals, and the various legal challenges that come along with them, he’s starting a new Superhuman Law division. And he wants She-Hulk to run it.

The only thing worse than not being able to get a job because she’s a Hulk is only being able to get a job because she’s a Hulk, but hey — at least it’s a job! So she poaches her paralegal/best friend, Nikki (Ginger Gonzaga), and the two set up shop in their new corner office. Jennifer’s first client, come to find out, is Emil Blonsky (Tim Roth), a.k.a. Abomination, first seen in 2008’s The Incredible Hulk. Jennifer points out that it’s a conflict of interest, representing a man in a parole hearing who is imprisoned for crimes committed in an altercation with her own cousin, but Blonsky has already signed a waiver saying he doesn’t mind. And when she goes to meet him in person, she discovers he’s got a solid case in his defense. He was operating under orders from the U.S. government, and though his destructive rampage wasn’t sanctioned, Blonsky claims he only committed it due to the experimental super soldier serum the government gave him. He thought he was the good guy, brought in to take down the Hulk, but now Bruce is an Avenger and Emil is in prison. But hey — he can control his transformation now, he’s written apology haikus to everyone he hurt, and he’s got seven soulmates he’d like to live on a compound with in harmony. He’s REFORMED maybe!

Jennifer wants to take the case, not only because it’s the only way to keep her job but because she thinks she can win. First, though, she calls Bruce to make sure he’s OK with it. Which he is! “That fight was so long ago, I’m a completely different person now — literally,” Bruce says, to which Jen looks at the camera and mutters, “Ha.” The series’s fourth-wall-breaking winking works well in this moment, to gloss over one of the weirder continuity lapses in the MCU. The Incredible Hulk has always held a place as a part of the franchise… kind of. The events from the film are canon, William Hurt has returned in numerous appearances as Thaddeus “Thunderbolt” Ross over the years, and Tony Stark even recruits Bruce in the film. It’s just that Edward Norton is not the MCU Bruce Banner. Mark Ruffalo is. It’s all old news, but the nice thing about having an actual straight-up comedy in the franchise is that She-Hulk is the one place that’s able to acknowledge the weirdness rather than ignoring it.

Of course, fans might remember that this isn’t the first time we’ve seen Emil Blonsky since The Incredible Hulk, either. In Shang-Chi, he was seen in his Abomination form at the underground fight club duking it out against none other than Wong (Benedict Wong) — another character we know is due to show up on She-Hulk this season. And if you don’t remember, that’s fine! At the end of the episode, Jennifer sees footage from the fight on the news and realizes her surefire case has a giant (magical teleportation) hole in it. Next week she’ll have to figure out how to argue for Blonsky’s parole despite the fact that he’s clearly escaped from prison in the not-so-distant past.

Even here, though, I think She-Hulk is unique in the way it’s providing context for references we saw in the past rather than delivering easter eggs pointing toward the future of the MCU. It’s also shading in the world of the MCU, the discrimination and legal woes of the superpowered community, not unlike the way Ms. Marvel explored the impact the Avengers had on inspiring teens. The stakes may seem smaller in these stories, but when the next big threat looms — from space or the multiverse or wherever — we, the audience, will have a greater appreciation for the consequences of the danger. And with the X-Men coming into the MCU someday, it’s never too soon to start demonstrating the ways society can be tough on people who are different — even if it’s just a green giantess who can’t get a job or even her own superhero name.

Now, if they could just get back around to Titania and whatever her beef is, I’d be grateful. Considering the tone of the show, I don’t hate the idea of a ridiculous, scenery-chewing Jameela Jamil deciding Jennifer Walters is her NEMESIS despite not really being a supervillain at all. Do you think they’ll bring back the Agents of S.H.I.E.L.D. version of Crusher Creel as her love interest, Absorbing Man? Or is that show even less MCU-adjacent than The Incredible Hulk?

← 'Welcome to Wrexham' Is Catnip for Sports Fans, But Engrossing for Everyone Else | 5 Shows After Dark: '2022 MTV Video Music Awards' on MTV, 'House of the Dragon' on HBO →