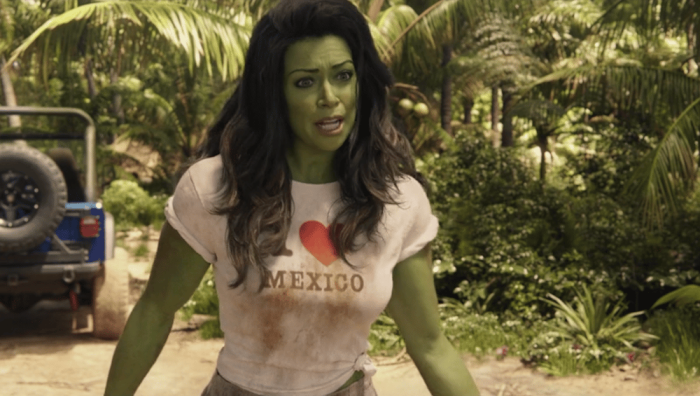 'She-Hulk: Attorney At Law' Review: Everybody Shut Up! Tatiana Maslany Is Back!

This week Elle profiled She-Hulk star Tatiana Maslany, and they bring up the fan reaction the actress earned when she attended San Diego Comic-Con with her last show Orphan Black. Here’s the thing: I was there. Once upon a time ago, I worked in the PR department at BBC America, and the profile reminded me of interactions I had on that convention floor. Whether fans had just come out of the Orphan Black panel or were lining up at our booth for an autograph signing with the cast, there was one sentiment that was repeated over and over again: “It’s really just… her!” You see, in Orphan Black Maslany played a con artist named Sarah Manning. She also played a housewife named Allison, a scientist named Cosima, a madwoman named Helena, an icy manager named Rachel, and more — all clones, all terrifically distinct. Obviously, the fans knew intellectually that Maslany played all the characters, but seeing a single solitary Maslany in person brought that reality home in ways that still surprised them. Likewise, when Maslany earned an Emmy in 2016 for her performance, it was almost ludicrously insufficient. How do you call her the “lead actress” when she was playing almost every character on the show? It was never a question of suspending your disbelief with Orphan Black, because there was no disbelief. Tatiana Maslany made it all real.

All of which is my sideways way of addressing the bad CGI elephant in the room: Forget the CGI. In She-Hulk: Attorney At Law, Maslany finally returns to a leading role as Jessica Walters, an ambitious lawyer, who also happens to be Bruce Banner’s spunky cousin and a newly hulkified Hulk herself. Rather than playing a lot of women sharing the same face, Maslany is tasked with playing one woman who has two very different physicalities, which makes the issue of CGI kinda moot because she’s Tatiana effing Maslany! Marvel could have painted her green, shot her from low angles, given her the full Lou Ferrigno treatment and she’d absolutely make you believe she was 6’7” and could toss the Hulk around like a hackysack. So what if her She-Hulk form looks a little airbrushed and soft around the edges? What matters is that her performance comes through, and her performance as She-Hulk is outstanding. So yeah, the CGI is a bit wonky, and I’m glad the brouhaha opened the doors to talking about the way Marvel abuses their VFX artists, but in terms of the show itself, I rapidly found myself not minding it — or at least I wasn’t struggling to suspend my disbelief because the green giantess wasn’t realistic enough. In a way, I think it even served a purpose, because the thing about the first episode is that Bruce Banner (Mark Ruffalo) is there, and HIS Hulk looks movie-grade. For me, the CGI difference between the two characters became as much a part of the sexism commentary as Jessica’s whole “I’m a woman, I have to control my rage every second of every day” spiel. And once Bruce is gone, I imagine the show will work just fine in the context of itself. A little goofy looking, the way television Hulks should be.

That last bit is pure speculation though because I’ve only seen the premiere (not the first four episodes that were offered to a lot of critics), and truth be told, I’m still not really sure what She-Hulk: Attorney At Law is going to shake out to be. I mean, I think it’s going to be a law show, mostly, because that’s what Jessica broke the fourth wall to say to the camera after dispensing with her obligatory Hulk origin story. So far the show seems to be knowingly pulling cues from Fleabag while perhaps unknowingly pulling an Ally McBeal (simply because, as creator Jessica Gao told Variety, most of her writers’ room was too young to watch McBeal, and as I say this my bones turn to dust). Still, the majority of the premiere is that origin story, and it was refreshingly… tidy? For better or worse, the MCU has devoted entire movie-length origins for most of its heroes, and even on the TV side the shows that have introduced a new character, like Ms. Marvel or Moon Knight, have spent the bulk of their first seasons being an origin story. So it’s a pleasant surprise when Jessica walks us through a flashback that proves there’s no great mystery to her powers. She was on vacation with Bruce, they flip their car over when an alien spaceship arrives (that’s probably gonna be important someday!), some of Bruce’s blood lands in Jessica’s wound and voilà — that’s how you get a She-Hulk. The rest of the flashback is mostly Bruce Hulksplaining how to be a Hulk to Jessica, while she proves that she mostly doesn’t need his help. She can control her rage (because: sexist society!), she doesn’t have a Hulk-ish other personality to contend with in her mind, and she can transform back to her human body with ease. Basically, everything Bruce has struggled with is simply not an issue for Jessica, and that means she has the possibility of living the kind of life Bruce hasn’t been able to: Her own life. She doesn’t HAVE to become a hero because she doesn’t HAVE to become She-Hulk. If she can control her powers, there’s no reason she can’t keep on being a lawyer, right?

Well, that certainly seems to be the question the show is trying to answer. By the end of the episode, Jameela Jamil’s villainous Titania has busted into Jessica’s courtroom in the middle of a trial for reasons that are as yet unclear, and the situation forces Jessica to transform publicly to save the day. Does having super powers obligate you to use them for the good of the world, or is it more important to do good your own way? There are eight more episodes to explore that question this season as Jessica juggles her newfound notoriety, but I’m more excited at the prospect of a Marvel show that feels like… a real TV show. WandaVision played with television genres, but She-Hulk seems to be the first Marvel show that is sticking to a unique television genre entirely, either a legal show or a comedy or a legal comedy. If the show is successful, it’ll present an interesting challenge tonally should Marvel decide to include She-Hulk into an Avengers film one day — though with Charlie Cox’s Daredevil poised to return in this series, it’s clear the show is playing into the studio’s long game, whatever that may be.

For now, though, I’m cautiously optimistic about She-Hulk, even as I remember that I said the same thing about Moon Knight before that show sort of wandered off the tracks by the end (and speaking of Moon Knight — shout out to Jessica for teaching Bruce the classic Oscar Isaac “Cheetos and Chopsticks” hack, a reference I enjoyed even more than all the Virgin Steve Rogers stuff). Marvel Phase 4 has spent a lot of time setting up new characters, and while I wouldn’t say the franchise is taking huge risks in its storytelling, I think it is mixing things up enough that fans aren’t really coming to a consensus about all of it. She-Hulk seems to be a very deliberate provocation of some of that fanbase, in a way that isn’t necessarily profound but is pleasantly cheeky nonetheless. Here’s a woman who can Hulk better than the Hulk, and she can be big and strong and smart and successful — AND she can be funny. Like, really funny! There are a lot of moments in the pilot that seem geared toward women (the bathroom support scene), but I think a lot of the show is thumbing its nose squarely at the bros, too. I hope it keeps it up, and I hope it remains funny and silly and a total law show too.

But whatever She-Hulk is trying to be, I’m sure Tatiana Maslany will sell the hell out of it and make it work. It’s what she does, and Marvel is very lucky to have her. Now we just have to kick back and watch her do her thing.