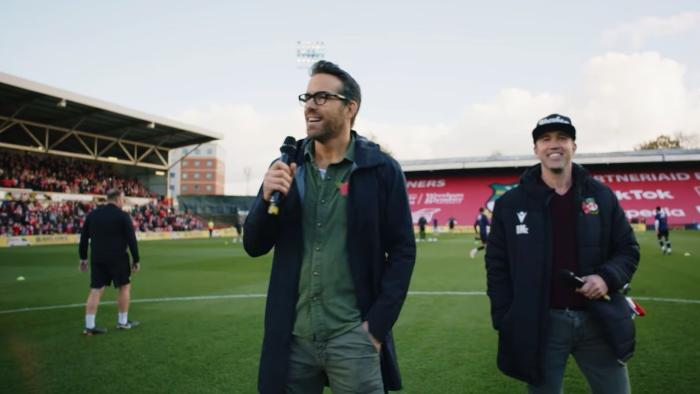 'Welcome to Wrexham' Is Catnip for Sports Fans, But Engrossing for Everyone Else

Most of what I know about soccer I learned from Nick Hornby’s nonfiction account of his Arsenal fandom Fever Pitch (upon which a terrible Jimmy Fallon movie is very loosely based) and Ted Lasso. Whatever else you want to say about the game itself, I love the way soccer is structured in the UK to allow for the demotion and relegation of teams, which seemingly maintains fan interest throughout the whole season. There’s more to the game than winning a championship — being promoted to the next league can be as exhilarating as winning it all, while being relegated can be just as devastating.

Welcome to Wrexham, the documentary series airing on FX (and Hulu), centers on Wrexham, a soccer team in a small, blue-collar Wales town, purchased by two American celebrities, It’s Always Sunny’s Rob McElhenney and Deadpool’s Ryan Reynolds. As the series picks up in the midst of the coronavirus epidemic, Wrexham is in the National League, the 5th level of teams, which is basically the last level of “professional” soccer ahead of the semi-pro leagues. Wrexham, which plays in a small city of about 65,0000, has been in the National League for 13 seasons, which is a far cry from where they once existed in their heyday, the Championship League (the second level).

As the documentary points out, the differences are vast for the players, who on average earn around €3.5 million in the premier league (the top league) and around €39,000 in the National League. More than that, for towns like Wrexham, whose identity is so closely aligned to their soccer team, a long streak of losing can be completely demoralizing for the community.

Enter McElhenney and Reynolds. McElhenney, a diehard Philadelphia Eagles fan who counts the Eagles’ Super Bowl win a few years back as one of the five best days of his life, becomes interested in soccer through Humphrey Ker, a writer and actor on his show Mythic Quest (he plays Paul on MQ, as well as the tall white British guy on American Auto). McElhenney decides that he wants to buy a soccer team and singles out Wrexham, but recognizes that he can’t afford to do so alone with “TV money.” He needs someone with “movie money,” so he reaches out to Reynolds, a friend he’s never actually met and only knows through social media. Reynolds obviously agrees to go in on the purchase, and after winning the approval of the team, the two take it over.

McElhenney and Reynolds — who concede that they know very little about soccer — assume ownership midway through the season and decide to keep things as is for the rest of the year. The documentary introduces us to the coach and a few players, as well as some folks in the community who all have opinions about how the team should be run.

It sounds like a feel-good underdog story, right? And maybe it ultimately will be. But this is not Ted Lasso, where a new coach comes in and gets the best out of his players. These are new owners (with a cash infusion) who ultimately want to improve the team and get it promoted to the next league. That takes us to the end of the season, where Wrexham is on the precipice of the playoffs (in the National League, the championship winner and the second-place team are promoted). McElhenney and Reynolds decide if Wrexham makes the playoffs, they’ll hang on to the coach and try to improve the team with some of the players they have.

Unfortunately, Wrexham misses the playoffs by one goal in a heartbreaker. “We’re going to have to rebuild,” a weary Reynolds says, and we see that the coach and some of the players we’ve gotten to know are sacked. This is the downside in a situation like this: Obviously, McElhenney and Reynolds want to improve the team, but that often comes at a human cost. To win, they need to bring in a better coach and better players, but bringing in new people means getting rid of some of the old ones.

That’s where things are left after the first two episodes, which debuted this week. At this point in the series, McElhenney and Reynolds aren’t in it as much as you might think. In fact, Ker — the Mythic Quest writer — is left behind to represent their interests in person and gets more screen time in Wales. Again, it’s not McElhenney and Reynolds’ job to recruit new players and hire a new coach. They don’t know a lot about soccer, and they’re not the Dan Snyder types. It’s their job to find someone who does know a lot about soccer and have that person rebuild the team. They’re the checkbooks, not the brains, and while they may not be in it to make a ton of money, you can bet your ass that they’re not interested in a money-suck.

After two episodes, I am completely invested. I already want to buy a Wrexham jersey and wake up at 4:30 a.m. to watch their games, and I don’t even particularly like soccer. But I love a good underdog story; I love that the initial goal — to be promoted — is an achievable one; and it’s also fun to see McElhenney and Reynolds outside of the environments we’re accustomed to seeing them in (and to see Reynolds, especially, as himself, and not as human schtick). A love of sports — and the ability to feel empathy for other fans who treat a game with outsized emotional importance — is probably helpful, but I think that anyone who likes Ted Lasso will probably dig Welcome to Wrexham as well. It’s good stuff.


← Prime Video's 'A League of Their Own' and How to Unwrite a White Savior Narrative | 'She-Hulk' Episode 2: This Client Is An Abomination →