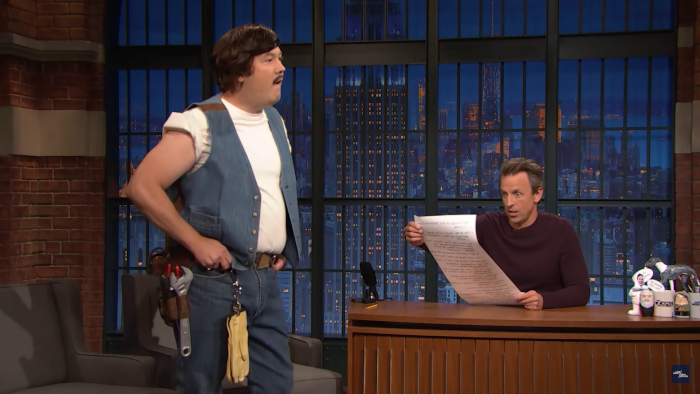 Rents in NYC are higher than my uncle’s blood pressure, which is pretty damn high, as I made him up for this article. The NYC Rent Guidelines Board voted for the biggest rent increase since 2013, presumably because they thought things have been too easy for us lately. I’m witnessing the skyrocketing rents firsthand and lemme tell you, it is no fun at all. That doesn’t mean we can’t joke about it, though, as the folks at Late Night with Seth Meyers did.

In a new segment, Late Night writer and SNL and 30 Rock alum Jon Lutz dressed up as Schneider from One Day At A Time (#ReleaseTheSchneiderCut) and pretended to be Seth’s landlord. Seth, of course, has a laundry list of things that need to be fixed around the show. These include infestations of rats (also known as stool pigeons) and ants. Wait, no, sorry, “Aunts.” It’s as silly as it sounds and twice as fun.

I’m not joking when I say that I’m dealing with increased rents and inattentive landlords right now. It almost does feel as comical as it’s portrayed here. I even avoided this sketch at first, as I thought it would just rile up the blood, like an ice-cold Sarsaparilla. But, laughing at it made me feel a little bit better. Then a piece of my bathroom ceiling fell off cause it hasn’t been fixed since my upstairs neighbor busted a water pipe when they got in a 3 AM fight with their boyfriend last year. Schneider!