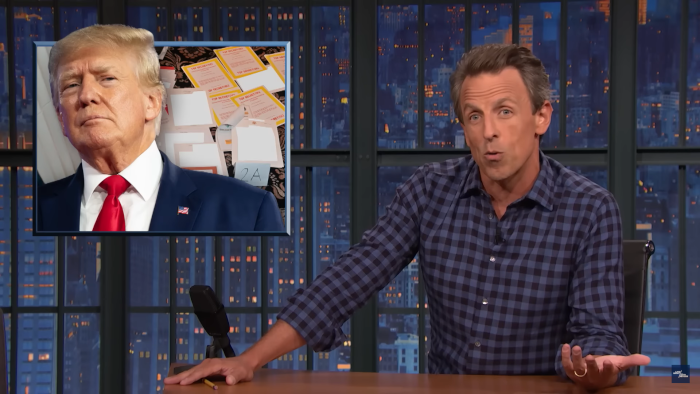 Seth Meyers Returns, Takes A Closer Look At The Raid Of Mar-a-Lago

On Monday, August 8th, 2022, the Florida home of a former President of the United States (less than affectionately known, on this site, as TFG) was raided by the FBI. It is a story that has dominated the news cycle for more than a month. It also took place on the first Monday of a four-week hiatus for Late Night with Seth Meyers. Meyers returned yesterday and devoted his Closer Look segment to the raid.

You could tell that Meyers was ready to dive deep into the situation. It felt like he had been holding in a sneeze for the entire four weeks he was gone. Can you blame him? That’s the name of his game. Late-night thrives on current events, and this event is so current that it’s still worth talking about a whole month later! Do you think I want to keep looking at TFG’s face? Of course not! But, thems the breaks.

Meyers also takes time out of AnCloser Look to take shots at Marco Rubio. Luckily, since the Republicans are a monolith of s***, Rubio works as a great stand-in for most of them. They all feigned outrage at Hillary Clinton’s emails, despite no evidence of wrongdoing. Here, TFG is caught with his d*** in the cookie jar (I just assume that’s how he rolls), and Republicans couldn’t downplay it fast enough.

It’s a ridiculous situation with no clear-cut ending in sight. At least Seth is back and venting. Sometimes you just need to hear a like-minded individual say what you’re thinking. Though, in this case, Seth may have said something closer to, “AGGGGHHHHHHH!” But that probably would have been harder to edit.