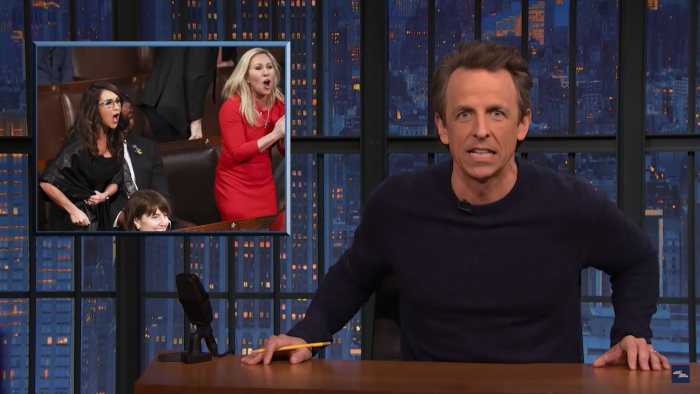 Certain members of the GOP seem to compete to “out asshole” each other. Just when you think, “Surely, they will show some decorum,” Ron Desantis decides to yell at high school students. Marco Rubio decided to skip the State of the Union Address (you know, the thing that’s part of his job?) because he had no time to take a COVID test, but it could have been worse. He could have gone there just to heckle President Biden, like members Marjorie Taylor Greene and Lauren Boebert.

Heckling is already a bottom-rung-level action to take. It is, more often than not, just an obnoxious attempt by someone who wants to be the center of attention to claim that title through loudly shouted gibberish. It should come as no surprise that Boebert and Greene are annoying audience members. I’m just happy that Meyers is here to take them to task.

Rubio, Boebert, and Greene may be embarrassments, but at least we can laugh at them. Also, you just know it gets under their skin. These people think they’re the popular ones, every time someone like Meyers talks about them, we’re just a few hours away from a tweet about how “Comedy isn’t funny anymore.”

Then why are you watching, Lauren?!