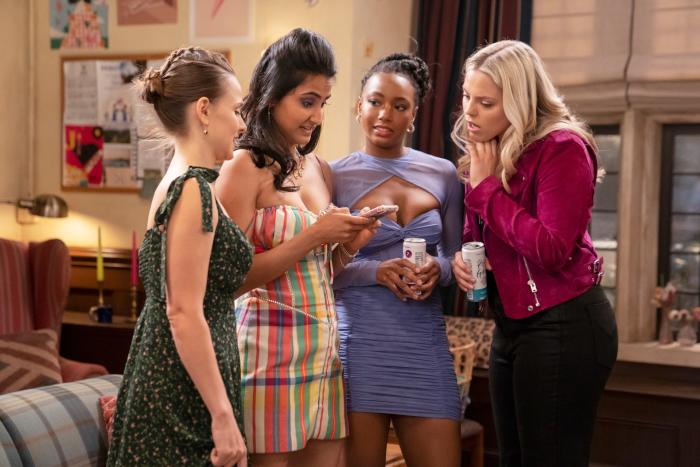 The Season 2 finale of Mindy Kaling and Justin Noble’s HBOMax comedy, Sex Lives of College Girls picked up with television’s four-fictional-girls du jour returning to their Vermont college campus for another semester of debaucherous parent-free fun. TSLOCG does not deliver the same punch as its HBOMax sister comedies (Hacks, Starstruck, The Other Two), falling more on the Gossip Girl (reboot) and Pretty Little Liars (reboot) side of the streamer than the prestige. Regardless, it is a fun show highlighting a period of young women’s lives that, when previously depicted, reserved its media bandwidth for the boys-being-boy genre.

The main cast, randomly assigned a room together at the beginning of the show, each have stereotypical characteristics. Leighton is a rich blonde mean girl. Bela is the daughter of immigrants with high expectations. Kimberley is a loveable dork from a small town. Whitney is a soccer star and the high-achieving daughter of a senator. At its best, TSLOCG lets its ensemble center themselves and experience growing pains in ways that feel organic to their character. As much as college (or the stereotypical college experience) is about academic growth, it is also, for many, the most self-centered time of their lives. They’re focused on their studies, hunting down the best party, or experimenting with their sexual and emotional desires. The young women each have an understanding of their ideal college experience, and the series is at its best when we watch them navigate between these moments of self-realization gone awry and sincere acts of friendship.

In these self-centered moments (think Bela bulldozing her peers in pursuit of comedy prestige or Leighton dismissing anyone not meeting her standards), each character is at their most fully realized, and often, their most endearing. For example, during a mid-semester roommate clothing swap orchestrated under the guise of sustainability, Bela, Whitney, and Kimberley dive for Leighton’s coveted hand-me-downs, revealing their true intention: first dibs at their roommate’s fancy closet. As Kaling’s self-insert character, Bela is most often caught in trouble of her own making, fleshing out her character via increasingly destructive decisions and a lot of plaid. During a week of partying, for example, she is literally blinded by her own jealousy (via a pair of cheap blue color contacts) before stumbling off to a bathroom to alleviate the situation.

TSLOCG is as joke-dense as any Kaling project. More often than not the jokes also further our understanding of the girls. Bela frequently waxes poetic about how good toddler-sized tee shirts make her boobs look or thanks a great-looking guy for his presence with an adoring wink. Kimberley, between trying to pay for college (selling her eggs) and dating the new hot guy next door, spent most of the season in one-liner purgatory. In her case, writers seemed to prefer dodging the seriousness of her financial precarity with laugh-at-how-little-Kimberley-understands-finance moments. Commenting on the reality of her mom’s political career (“We adopted a dog. My mom thought it would help her approval ratings. It did not. She returned it.”), Whitney gets to flex her wit without the burden of being led on (groomed) by her soccer coach.

Race and class commentary aside (of which there is some, most a tad too on the nose for my taste), the show lets young women—outside of a five-star resort or a billionaire family—be authentically self-centered imperfect eighteen-year-olds, and conversely, prove their love for and dedication to one another. Outside of those moments, however, this season fell flat for me. The show’s near endless stream of gorgeous one-dimensional guys could be a semi-interesting commentary on the stereotypical depiction of women in college comedies IF said guys weren’t also mean to the women with which they are involved.

Whitney and Bela, the two women of color in the main cast, spend the majority of this season romantically involved with their former antagonizers (a notable trope of Kaling’s canon), not to mention the disastrous fling Bela has with a famous comedian when he comes to campus. The comedian (played by the usually endearing John Reynolds), for some reason, speaks with nearly the same cadence and syntax as real-life Mike Birbiglia … which was off putting to say the least. Whitney, on the other hand, is insulted and belittled all semester by a “bio-bro” in her favorite new class (Bio-chem, the hardest on campus), only to find herself attracted to him once they are paired to work together. Kaling has a thing for an enemies-to-lovers arc. However, in TSLOCG, when the trope plays out between different characters nearly simultaneously (or when said antagonization veers into being straight-up racist), it became less like a sexy-forbidden-romance and reads more Stockholm Syndrome.

The actresses have incredible chemistry and the jokes, it bears repeating, are fantastic. The show, however, tends to trip over itself when it ventures beyond the witty banter of four well-educated young adults. For all of TSLOCG’s effort to be a show that captures what it is like to be a young adult in 2022, it loses its edge when compared to shows like Sex Education and Girls, because instead of committing to conflict and potential long-term consequences it prefers fresh situations and new campus drama. For example, all but one of the main conflicts set up in Season 1 were resolved in Season 2 by a sentence or less. Whitney seems healed of any residual trauma of being groomed by her soccer coach, and Kimberley brushes off being Leighton’s brother’s secret (second) girlfriend. Leighton’s formerly hard-line conservative parents fully accept their queer daughter. Oh! And, not a breath about the former Catullan editor that sexually assaulted Bela.

Stuck on a spectrum between darker comedies/dramas (Girls, Sex Education) and more contemporary sitcoms like Broad City, TSLOCG, for all its heart and found-family charm, doesn’t measure up to its peers on either side. It doesn’t take fallout seriously enough to compete with the former and isn’t able to deliver fun single episode shenanigans like the latter. What’s left is a funny, though not entirely satisfying, young adult coming of age series.


← How Is FX's 'Kindred' Different From Octavia E. Butler's Novel? | Review: 'The Big 4' Is The Other Must-See Netflix Movie This Month →