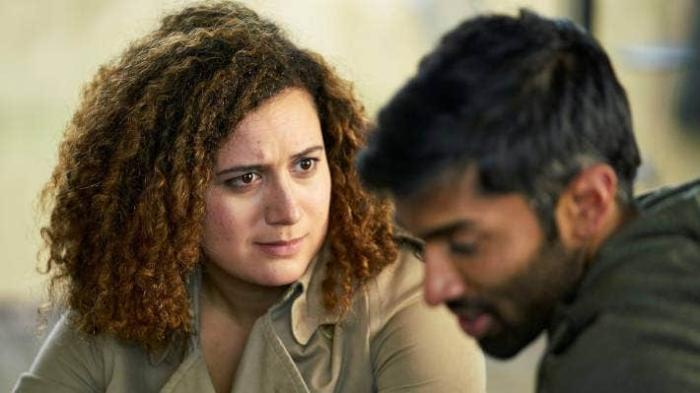 Review: 'Starstruck' on HBO Max is Bridget Jones in a Reverse 'Notting Hill'

Comedian Rose Matafeo is the opposite of a lowercase girl. The concept is one writer Jill Gutowitz coined while writing about the way Taylor Swift chose to stylize the song titles of her album folklore in lower case letters. “A lowercase girl texts and posts in lowercase letters so as to appear relaxed,” Gutowitz explains. “We are the antithesis of thirst.” By contrast, New Zealand-born stand-up Matafeo eschews nonchalance for exuberance. In her first comedy special, Horndog, she’s a proud proponent of emotional horniness, aka loving things (like the band Franz Ferdinand) obsessively and earnestly.

She describes Starstruck — a BBC Three series premiering on HBO Max June 10 on which she serves as creator, co-writer, and star — as “a reverse Notting Hill.” In Notting Hill, a peak-career Julia Roberts plays a peak-career Hollywood actress whose smile is so powerful it nearly liquefies a bumbling book shop owner memorably played by Hugh Grant. In Starstruck Matafeo is Jessie, a twenty-something (in her words “a young 28”) from New Zealand trying to make it in London two odd jobs at a time whose life gets thrown for a loop when she bumps into Hollywood star Tom Kapoor (Nikesh Patel) on a night out.

Patel is most known for playing the romantic lead in Hulu’s Four Weddings and a Funeral, Mindy Kaling’s television series inspired by the 1994 rom-com. In it, his character was described as “Ryan Gosling dipped in caramel.” In Starstruck, he is once again playing a seemingly-unattainable dreamboat, and he bounces off Matafeo’s Jessie remarkably well. Jessie’s got mile-a-minute quips and tornado-like energy and Tom’s a steady beam that can not only withstand it, but actually likes being knocked around. The series is a rom-com though, which means it’s obligated to mine drama from fairly low-stakes life problems. To that end things get off to a wonky start — their meet-cute is in a nightclub bathroom — and Jessie doesn’t know who he is until after they’ve hooked up which leads her to struggle with the intangible but nevertheless palpable status gap his fame creates between them. In a devastating but hilarious scene after leaving post-hookup Jessie runs into paparazzi outside Tom’s home and after taking her in for a split second, they immediately assume she’s his house cleaner.

Romantic comedy is a genre with a deceptively narrow mandate —- telling a love story — that has spawned thousands of movies, plays, and television series that have attempted to make art out of humankind’s perennial quest for love to varying degrees of success. Rom-coms used to only be about happily ever afters but the progressive ideals of the modern age have tasked the genre with evolving and broadening its definition to include other loves like friendship, career fulfillment, and even self-love. Matafeo is an avowed rom-com lover who cites genre classics like Bridget Jones’s Diary as influences. In an interview with BBC she explains, “You’ve got to play tribute to Bridget Jones in many ways, for opening the doors to quite a forward, female protagonist in a romcom.” Starstruck is a charmer from start to finish in large part because Matafeo and her best friend and co-writer Alice Snedden both share deep knowledge of genre conventions and a deeper affection for upsetting them.

Matafeo has a way of making earnestness and vulnerability seem courageous. So much so that it has started to emerge as a thematic trope in her nascent body of work. In Starstruck, Jessie is desperate for connection but afraid to be vulnerable which makes her the quintessential millennial heroine. Millennials notably turned a line from a 2013 Tim Krieder essay into a meme: “if we want the rewards of being loved we have to submit to the mortifying ordeal of being known.” And we have memed it to death. Fear of intimacy is, apparently, the most relatable problem in the world. When Tom begins to ask Jessie questions about herself she squirms (Tom, sweetly: “I just want to know things about you.” Jessie, perplexed: “Why?”). Their connection, like all human connection, is a tricky dance and Matafeo and Patel are well-suited dance partners.

Starstruck is a cotton-candy confection, a breezy six episodes marked by sweetness and levity that once you’ve finished, you’ll be devastated there isn’t more of. Luckily, Matafeo has already confirmed season two.