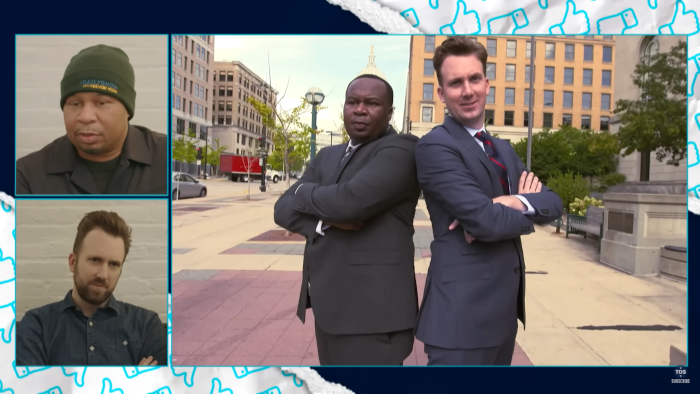 Roy Wood Jr. And Jordan Klepper Look Back At Their First Daily Show Field Piece Together

It’s the time of year when people start reflecting. They think about what they’ve seen and done and tasted and snorted this past year. Why stop there? It’s so easy to focus on the most recent year. Why not look back six or even seven years? Pull back the curtain and look at the television segment you filmed with a good friend in 2015! That scenario doesn’t apply to you? Fine. It’s still fun, regardless!

Recently, Daily Show correspondents (and maybe future hosts?) Roy Wood Jr. and Jordan Klepper sat down to reminisce about their first field piece together. They ventured to Madison, Wisconsin, to look at anti-bias training officers there were taking. From the beginning, the two are playfully taking shots at each other. It’s wonderful to see their offscreen chemistry. Maybe it’s the post/mid-holiday high, but I’m happy to see two people who work together that like each other.

The field piece itself is kind of depressing, and that doesn’t seem lost on Wood Jr. and Klepper. Police bias has not gotten better, to put things mildly. What was funny seven years ago, Klepper playing the stereotypical, biased white guy, is more exhausting at this point. I don’t say that mildly. I love Klepper, and he’s funny in this piece, but a lot has happened since then.

The real sell of this piece is the Wood Jr. and Klepper friendship. Two funny guys who like each other and are comfortable ribbing one another for the world to see. That’s a great way to ease into the new year.