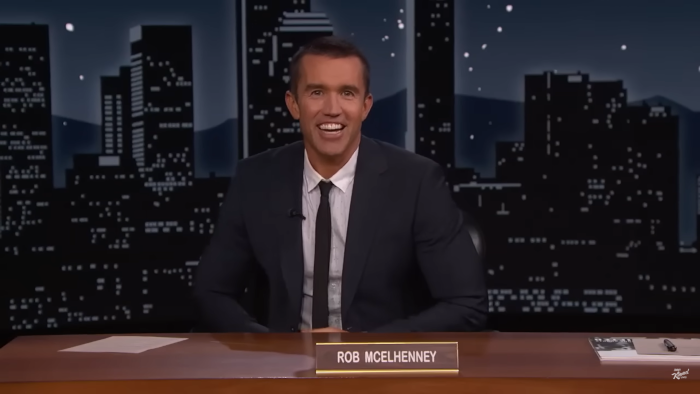 Rob McElhenney hosted a late-night talk show last night. That is a sentence I never thought I would write. Not long ago, on this site, I wrote that It’s Always Sunny In Philadelphia is not mainstream. Some of you didn’t agree, but I stand by it. Is it more mainstream than it was at first? Absolutely. Do people who are my parents’ age (late 60’s) and older know what it is? No way. That said, the actors in the show have garnered some mainstream appeal, hence McElhenney’s hosting duties.

Seeing someone like Rob host a show like this is a treat. You can feel the excitement emanating from him. Hosting clearly means so much and he does not squander the opportunity. In fact, he excels at the position. His timing is great, his acting abilities shine through when he’s doing a bit, and he feels calm and collected during the interviews.

It certainly helps that one of the people he interviewed was his Mythic Quest co-star Charlotte Nicdao. Nicdao is already hilarious and charming, add to that the fact that the two have wonderful chemistry, and you get the best-case scenario for a late-night interview. It feels more like a fun conversation between friends. It makes the whole ordeal feel more casual and accessible. You also get to see an old Star Wars home movie that Nicdao made and it is so freaking fun.

It makes sense that McElhenney is a great host. He and his Always Sunny buddies have been crushing it with their own rewatch podcast. If you haven’t listened to it, you absolutely should. Still, it feels special to see Rob take his talents to this big of a stage.